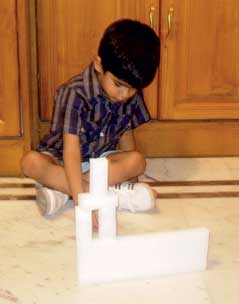 Many moons ago, a colleague substituting in Grade 1 made a dot on the board, and asked students’ what it was. He was inundated with ingenious responses – “A star far, far away”, “The top of A’s head as seen from an airplane”, “Marker saying hello to the board”, “The end of an elephant’s tail” and very few “That’s a dot/point”. He repeated the exercise with his Grade 10 students and got a combination of blank and bewildered looks, appearing to question his IQ with an uncanny unanimity about it being a “dot”. There must be something in the way little children learn that keeps their imagination well nourished and fertile; there must be something that we, adults, do differently to lose perspective of possibilities and become masters of prescribed procedures.

Advocates of play perceive it as a cognitive and affective process, simultaneously stimulating multiple synaptic nerves, making it both a process and a product. As a process, it facilitates individual understanding of skills, concepts, and dispositions; as a product, it is a vehicle for children to demonstrate their understanding of skills, concepts, and dispositions. In the 1970s, Germany decided to ramp-up the academic quotient in the kindergartens at the expense of play. More and more academically oriented kindergartens mushroomed in the early childhood education space. Researchers, in their quest for empirical evidence on the wisdom of such a move, studied 50 children each (up to grade 4) from academically-rich kindergarten and from play-rich kindergartens. It was found that the latter excelled over the former in every domain – physical, emotional, social and intellectual. The findings were compelling enough for the Germans to reverse course.

The author is an international educator and founder of Art of Learning, a Gurgaon-based education consultancy. She can be reached at [email protected].