The Centre for Learning (CFL) has been running in Hyderabad for the last 30 years. It has a mixed group of students. Some parents enroll their children at CFL because they believe in the school’s philosophy but others because they don’t want to fit their child to an inflexible formal school routine. Some come because their child cannot fit into the rigid learning schedule. Some come because their children are rejected by other schools. A few are at CFL because of learning difficulties; some have emotional issues or are from an economically disadvantaged background. CFL thus works with children who for different reasons do not find the formal mainstream schools conducive to their needs. It has mostly been able to help children acquire academic skills and emotional maturity.

Today it stands on the brink of closure. Because the RTE insists upon all schools being recognized. To get recognition requires an investment into infrastructure which a small, not-for-profit, alternative school cannot afford. It also means following other rules that conflict with what makes CFL effective.

While the RTE is good and a much-needed step forward, there is definitely a feeling of disappointment with some aspects of the RTE. The Government must make it possible for all who want to go to school to freely access a school. The Government is overreaching itself when it compels children to go to only government- recognized schools or only one kind of school. 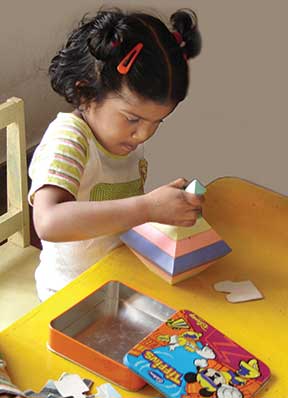 There are two reasons for this. First, in view of the poor quality of many government and private schools, it makes no sense to compel children to go to such schools without first improving their quality and thereby ensuring that the child will actually gain from attending the school. Second, given its neo-liberal leanings is the government really taking on responsibility or under the guise of taking responsibility, is it opening a captive market for the private sector? It is also in some cases subsidizing the private sector with the voucher system while saying it does not have the means to support education for all. On the other hand, the loans taken to fund education from the World Bank and/or other countries make us more indebted and less free to make our own choices now or in the future – and that too for, what is at the best, a doubtful gain.

If the government is really serious about a good quality education for all, the first thing it should have done is to make all schools common schools. All it has done is insist upon 25% intake of students from disadvantaged backgrounds every year. Most of the elite schools are getting out of this with some excuse or the other. Without children from privileged schools going to the same schools as the less privileged, there will never be an improvement in the quality of schooling. The disparity that exists in the quality of schools for the more privileged and the less privileged will ensure this disparity continues to follow them through life in their access to opportunities.

This move towards standardization ignores the fact that the existence of different curricula and systems makes it possible for us to imagine different ways of doing things. It helps us compare to see what might be other ways of doing something better. We can learn from other ways of teaching and improve our work. In fact the existence of alternative schools has actually forced formal schools to consider the possibility of activity-based, play-way methods of learning. Alternative systems of education must be encouraged not only to make it possible for the parents and the children to have a choice but for formal mainstream schools to improve by considering other ways of educating.

The other danger is that if and when one has a government in power whose concept and aim of education are at variance with the kind of education that one would like to choose for one’s child there will be no other options available. It is not very long ago that a lot of us had difficulties with the saffronization agenda of the previous government. It is not so difficult to imagine that in future, some political party will impose a syllabus that is guided by utilitarian or technocrat considerations – that completely cuts out humanities and history. If today we agree to one standard syllabus for all, in the event of such an eventuality, we will have no choice left.

The danger is that the state looks at education from the point of preparing obedient, compliant citizens and productive individuals that compromises the view that individuals should be ends-in-themselves. One does not need to produce any further evidence of this than the fact that the Department of Education is under the Ministry of Human Resource Development. While the present NCF 2005 document is perhaps the best curriculum guide we have had, can we forget that it still instills/imparts mainstream values to the students? The concept of development and progress underlying the curriculum is the mainstream concept of progress that is not only undesirable – especially if one values social justice – but unrealistic and impossible given the environmental constraints and the crisis looming.

Gandhiji said, “I am not quite sure that I would not oppose compulsory education at all times. All compulsion is hateful to me. I would no more have the nation become educated by compulsion than I would have it become sober by such questionable means.”

On this same issue Rabindranath Tagore said: “Today of our own accord, we are ready to hand over to Government the duties which belong to Society. Society has lost interest in itself, and Government must provide even the gift of education. That is where the danger lies.”

There is need to give serious attention to this concern of Gandhi and Tagore.

The author has been working in the field of education for the past 30 years. She has been involved with teaching, teacher-education, curriculum development (at institutional and national levels). She is based at an alternative education centre, Centre for Learning, Secunderabad, which she co-founded. She can be reached at kaur.gurveen@gmail.com.

Let’s keep the alternatives
Doing things differently – for a reason
Some concerns from an alternative school
Innovation is important
Adivasis, education and the RTE Act
Our efforts will continue