As adults we believe that we know it all and children, being who they are, are inexperienced and do not have any thoughts or ideas of their own. We believe that the responsibility of shaping children rests on us. To do so we allow our own perceptions of the real world determine what must be taught and prefer to follow standardized teaching procedures without paying heed to the fact that children also have their own ideas and perceptions of the real world. We forget that we too were once curious and fascinated by any form of nature or anything new that we saw for the first time. 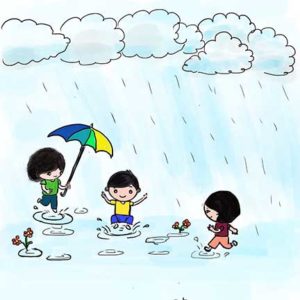 Different children have different personalities, which determine how they like to learn new things. When I started my career as a teacher, I had 25 children in my class in the pre-primary section. Each child was unique in his or her own way, but some were very different especially in terms of their behaviour. Some preferred to sit alone in the room, some would not sit even for five minutes, some hated the idea of picking up crayons and pencils to write or colour and so on. The most challenging of the lot was this particular child who loved climbing benches and running around. It used to be extremely difficult to conduct a class based on the prescribed syllabus, which involved writing words and numbers. These children lacked comprehension skills and could not follow simple instructions. I decided to come up with a concrete plan to help these children learn, keeping in mind their unique personalities. Little did I know that a much bigger challenge awaited me. A picnic was to be planned for the primary class children. My imagination ran wild. I could see them running all over the place, jumping over walls, picking up stones and putting them into their mouths, while I stood screaming instructions that no one paid attention to. Obviously, I could not refuse to take them on a picnic on the grounds of my wild imagination.

Left with no option but to embark on the trip, I had to come up with a way to ensure safety while we had fun as a class together. Since they were too young to travel a long distance, a nearby park was chosen for their first picnic. We sent a note to the parents about the date and time for the ‘fieldtrip’. Next day, a grandma was at the school anxiously waiting to ask how we could take the tiny tots on a fieldtrip. Her anxiety made me more nervous but I managed to stay calm on the outside and assured her that it would be fine as we were going only to a nearby park. She let out a sigh of relief, while I prepared myself mentally for the trip.

The day before the outing, I started a conversation with the children about the picnic to the park. Some kids enthusiastically talked about the park, while the rest remained silent. The silent lot were the ones I was worried about. How would they react in an open space? Will they follow instructions? They don’t follow instructions in class, how will they follow them in an open space? I wondered. I had hoped that a conversation about the park would make things different. I showed some slides and pictures of parks and talked about what they would see there.

The D-day arrived. Armed with necessary items like water, snacks and little umbrellas, we walked together, holding hands, to the park. Once inside, the children were allowed to run around freely and play. Thankfully my nightmare did not come true. The children I was worried about, in particular, were at their best. As a matter of fact, they enjoyed being there and came forward asking interesting questions.

We took them to see the rabbits. While we observed the rabbits, Kiran* tugged at my saree pallu. I always thought that he might have ADD (Attention Deficiency Disorder). He said that he wanted to ask me something about the rabbits. This was the first time he had shown interest in something. Intrigued, I waited for his question. He asked, “Which is the rabbit who ran the race with the tortoise? Where is that tortoise now?” I was a little taken aback by the question and mulled over what the best answer to that question could be.

It started to drizzle. Tiny, colourful umbrellas were opened and held by tiny hands. It was a very pretty sight. All the children loved walking with the umbrellas, except for Ria*. She looked worried. When I reached out to her, she asked, “Won’t the plants catch a cold if they are left out in the rain? Who would give them umbrellas?” I explained that nature has made them resilient and given them the ability to be free from colds. As we walked towards the exit, I noticed that one of them was a little behind the rest of the group. Worried that she might be up to some mischief, I went to bring her back to the group. She was looking at flowers and feeling the petals. When she was done, she ran back and joined the group without me having to instruct her.

Just when I was beginning to think that perhaps it was me, who was learning more on the trip, the child who always loved climbing benches and disturbing the class, surprised me. Raj* spotted a kitten being chased by a dog. He managed to get all his classmates together and surround the kitten. He then tried to scare the dog away. The dog was of course absolutely puzzled by the turn of events and thought it best to run away. Conflict averted, we finally made our way to the exit, when this child surprised me once again. He asked, “Where is mamma cat? Why wasn’t she there to protect her kitten?” I wish I knew the right answer. All that I could manage was a meek, “I don’t know.” 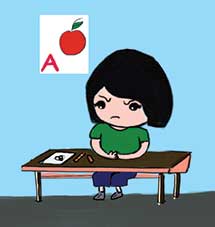 After the kids left for the day, I pondered over the variety of questions I had heard that day. I realized that those children liked to learn by seeing, feeling and touching. Given that environment, they were on their best behaviour and what’s more, they were very eager to learn! Encouraged by their response, I decided to come up with a good answer to each of their questions.

I used different stories to answer their questions in the following days. Gradually over time, I began to notice a change in their behaviour in class. Raj who had led the mission to save the kitten in the park asked his parents to get him a kitten as a pet. His parents were puzzled but since he seemed very keen, they went ahead and got him a kitten. Much to their surprise, the arrival of the kitten brought about a huge, positive change in his behaviour. His tendency to get hyperactive considerably reduced. The child who hated anything to do with crayons and pencils took interest in drawing and colouring beautiful flowers.

Since the first picnic had a very favourable impact on the children, we began to arrange more picnics. The duration was gradually increased from two hours to two day picnics for the primary children. The impact these picnics had on them was phenomenal. It became obvious that a closed classroom mode of learning was insufficient for these children. The more practical their lessons became, the more interest they began to show in learning new things.

Over the years, having taught several children and having been trained to be a special educator, I have often wondered whether we as adults should be labelled as ‘differently enabled adults’ as we often cannot understand the beautiful world that the children conceptualize.

The author is a qualified special educator with over 30 years of experience with both normal and special children. She can be reached at radhikamitter25@gmail.com.