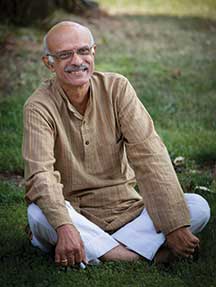 In any role one is first and last a human being. The daily challenges show us our ethics, certainties, and fallibilities, a humbling and strengthening process. It has been my good fortune to work in a place that offered freedom to think, question, and re-conceptualize school processes. School was and is a wonderful learning opportunity.

I look back on a golden moment that I experienced when I was appointed principal. One was not responsible for any existing problem. All too soon one had to accept the final responsibility for the continuity of problems, for not finding ways ahead and for new ones. I have often said, “my colleagues are responsible for all the good work, and I am responsible for the problems that are unsolved.”

Krishnamurti said, ‘Get off the pedestal!’ to teachers, and created a crisis for principals. In a K school, the principal is one among equals, whose role requires finding egalitarian and non-authoritarian engagement to move ahead. Students and teachers are encouraged to question and this builds a liberal and energetic atmosphere, even if it is somewhat irreverent at times. Schools are atmospheres and the principal’s first duty is to attend to this to sustain it.

Thichnat Hahn says, “The flower is made of only non-flower things!”School and its atmosphere are made of only non-school things. It is the relatedness, the consistency and tone of interactions that define school, not academics and procedures and rules. I used to say on occasion, “we also teach academics!’ Conversational spaces among students, teachers, in class, in open houses, in staff meetings and parent meetings are rare and precious. When explorations begin with sharing questions and perceptions as equals, the movement has a life of its own.

Further, Krishnamurti offers a rare invitation to teachers to be ‘responsible for the whole.’ Moving together as a coherent staff body is neither easy nor obvious. How do adults participate in the process of generating good decisions and sustaining an atmosphere? How does a school develop depth in its decision making? Questions, dissent and disagreement are essential for good decisions. The messenger of bad news is not to be castigated.

As the 21st Century dawned, it pushed in many directions, disrupting business-as-usual. Information became instantly available. The media explosion and advertisements ‘teach’children the hidden curriculum of our society, reducing schooling to an ineffective ritual of knowledge acquisition and high-stake examinations. At school, making sense of knowledge came into focus and ‘teaching’ had to be redefined as ‘facilitating learning’. Thus, schools entered a very special zone – exploring new ways ahead became almost mandatory. Also, around this time, the horrifying statistics of Child Sexual Abuse came to public gaze. Schools had to offer safety to all children.

Michael Fullian says, “Change of form precedes change of culture.”I joined The School 18 years after it started, and was principal for the next 18 years and Director for another three. One worked hard to meet the challenges and anticipated challenges at the level of infrastructure, pedagogy, and key thrusts. A radical new program for students of class 11 (1997) was initiated when a purely academic program ran out of steam. Multi age classes in Junior school (1999) and in middle school (2006) replaced the class wise arrangement, to make learning from peers possible as also to enable student learning ‘at one’s own pace’. A teacher training program commenced in 2006 for new teachers to enter school better orientated. The CSA prevention program was started in school and workshops for sensitization for teachers and heads of schools, government and private were initiated.

The 11th standard program created a threshold into adulthood and was adapted from practices such as the ‘Walkabout’. One of the students called it ‘once in a lifetime opportunity’. The programme took our students and staff in the winter months to the Narmada Valley, Barefoot college, Parivarthan, meeting people such as Baba Amte, Medha Patkar, Rajinder Singh, Bunker Roy, Aruna Roy, Fr Thomas Kocherry and Arvind Kejriwal who had given their energy to fairness, egality, and a life without excessive personal concerns. Students also encountered farmers, tribals, the poor, slum dwellers, faces they normally don’t. Students grew, understanding the other India and developmental questions. The numbers in classes 11 and 12 rebounded from a low of single digits to around 65 with impact on budget, staff body composition, and retention of students below class 10.

A shift to multi-age classes in Junior school was smooth and with many examples in Montessori and other systems. However, the multi-age grouping in middle school, shifted the classroom processes significantly.

Sarva Shiksha Abhiyan-TN showed interest in this and engaged with us. In one short year, 16500 middle schools moved into Active Learning Methodologies (ALM), guided and supported by teachers of The School, working through the Outreach wing. DFID* report in Jan 2008 said that, “The innovation was developed with the help of ‘The School’ of KFI and involves major changes in the classroom processes emphasizing the importance of the engagement of the learner with the sources of knowledge and not as a recipient of information from the teacher….To the Mission’s knowledge ALM is the first major pedagogical intervention in upper primary education under SSA and, as such, it warrants particular attention.” It demonstrated starkly that the processes that worked in an English medium city school, worked in every government school as well.

The State system sought help with reworking the ABL cards for primary school, rethinking Teacher Training Syllabi with DTERT and evolving a pre-school syllabus for ICDS. All this was possible thanks to the voluntary effort of many teachers, carefully coordinated by my wife and colleague Sumitra M Gautama. Unusually, a small private school in Chennai could share its insights with every State government school.

Through discussion, dialogue, and proposals, these and many other forms shifted. There is a tide in the lives of institutions. If seized, movement happens easily. As principal I helped the school seize several windows of opportunity and I believe we moved in the right direction.

As principal one is expected to see that children are happy, academics are transacted well in a healthy atmosphere. But there are situations outside all role definitions such as when the father and mother of a child come to school with their respective lawyers and court orders for custody of child, or when a child indicates that she is scared of a near relative or when an influential person wants to visit his grandchild in school against the mother’s instructions. The biggest learning is that we cannot choose the situations that come our way. Life is only about how we meet them? I also saw how as a result of complex circumstances, the school had to plan a relocation.

Once someone asked me, ‘What is the strength of the school where you work?’ I replied, ‘Conversation!’ The visitor persisted, with that tolerant look reserved for those who are a little slow, ‘I mean, how many students do you have?’ I said, ‘Oh that! 350, hardly a number in India today.’

Does education prepare students for ethical living? Or does it co-opt them helplessly into the role of invalidated bystander, helplessly upholding, witnessing, unethical happenings in small or large measure? This concern has been at the heart of my weekly conversations with students in culture classes, general studies classes and other contexts. Students could speak honestly and listen carefully to multiple perceptions, thereby hopefully understanding themselves and society a bit better. I have heard profound wisdom in students’ words, powerful and authentic, and carry fond memories of the students and their courageous sharing.

Entrusted by KFI to stabilize a new KFI residential campus, after 21 years at The School, I now look after Pathashaala, 75 Km from Chennai. This is a pilot school designed for 120 students, which attempts a shifted approach, while rooted in the essentials of all K schools. It is shaped around life-long learning, self-directed learning, facilitation rather than teaching. The campus has L shaped learning spaces rather than rectangular, solar lighting, ecological sanitation, passive solar construction and reaches out to the neighbouring village communities.

If I ask myself what I have done in the past 24 years, I would say, “I tried to see if school can be a place for teachers who are learners, where people work together fearlessly as equals, finding good decisions and movement,” the belief being that if this happened, students would be well educated.

The author is Director-Secretary of The Chennai Education Centre KFI (Pathashaala & Outreach) near Thirukalukundram. He was former Principal, The School, KFI, Chennai from February 1991 to May 2009. He can be reached at gautama2004@gmail.com.