‘Do you think talent and practice are inter-twined? If yes, why?’ the boy asked. He struggled with the word ‘intertwined’, getting it on the third attempt, grinning as he did.

I grinned with him, not just because he tried, but because, for an 11-year old, the depth of his question pleasantly surprised me.

Clearly, I had allowed my perceptions to walk ahead of me: I never thought I’d have kids ask me these questions. At least not here, in Pathanwadi.

In the drizzle of a Mumbai August, I asked for directions to the school. The butcher directed me. Away from the tall buildings coming up in the distance, ‘past the green mosque’, I found myself in a tiny lane: plastic curtains on tiny doors, wet clothes crowding rickety first-floor balconies. All signs of, what you would call a Mumbai slum.

Looking for the school, I focused beyond the 5-year olds playing catch, to the depths of the lane that allowed only a narrow strip of sky. I saw a stream of kids, a gate and a watchman. Before I could utter ‘Divine Child’ I was showered with queries that came like happy rain ‘Yes, ma’am, this is the school…’ ‘Ma’am, you’ve come for the interview? It’s tomorrow. You’re the dancer?’

Truly, few things are more red carpet than the enthusiasm of children.

Divine Child, is like most municipal schools. However, unlike most I’ve been to, these kids spoke fluent English, and lest you think me prejudiced, it was not so much the fluency of language, as their knowledge of something more.

I was eager to find out. But they beat me to it: ‘How come you are here today? It is tomorrow, no?’ Fiona Vaz, TFI fellow, and education consultant who teaches them extra skills through projects, invited me to talk about poetry, and be interviewed by four students for an hour for Expert’s Day. I’d arrived a day earlier.

The kids were in the 7th standard. As I repeated their names, I was rewarded with big grins for having acknowledged them.

Was I the poet? Yes, I said, ‘I write poems’, not wanting to sound pompous. ‘So you are a poet?’ they asked again, making sure I didn’t retract my statement later.

Even as I glanced beyond them, I saw parents who’d come to pick up primary school kids. Shy, hesitant, wary. Mostly poor migrants from other states, I was told later. A stark contrast to what these kids would grow up to be.

‘We will interview you… but we don’t have our questions today.’ With a quick phone-call to Fiona, and with an assurance far beyond their age, they rescheduled the session. ‘Don’t worry ma’am, we will get the others, and our notes.’

While a few checked if they could miss ‘Extra class’, the others didn’t spare a moment to know more about the world. One little hero, about three and half feet, went for it, ‘Ma’am, what kind of poetry you write? Have you travelled abroad? Where? Ma’am I like to act, I want to become an actor.’ And while I mischievously queried him right back, he freely gave me his world view: how travelling would let him see places, meet interesting people… It was obvious that, for him, Pathanwadi was not enough. 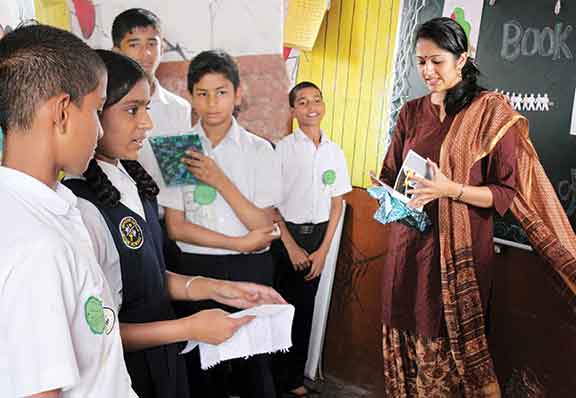 ‘Practice makes perfect’ was the theme for Expert’s day. While I don’t really see myself as an expert, or even completely buying into the strictness of the saying, I wanted to share about poetry, and loving what you do. The project involved the students interviewing ‘experts’ from various fields and putting together 1000 word essays which would be bunched together into a book.

In the quiet of a third floor classroom, they chose to interview me separately. Like professional journalists wanting exclusive quotes. And yet there was collaboration; some discussed questions so they could help the others meet the 1000 word target.

They’d served me one googly already by speaking English so clear that it made me question the lane I’d just walked through. But clearly, I wasn’t ready for their maturity, their level of understanding, and the honesty and incisiveness of their questions: Why did I choose to do what I do. (Like they were beginning to understand the deeper consequences of choice.) Who are my mentors? How many books had I published? What was my biggest award? Of course, they wanted also to know if I knew any Bollywood actor personally, and in pure innocence, eagerly pulled out notebooks for phone numbers, even before I could answer.

They saw life through a wider angle than many adults: They didn’t just want the interview. They wanted me to read one of my poems, do a workshop. They didn’t just ask about words, but how much money those words would make. Their questions opened a deeper tunnel into their world, showing me that they knew the value and power of money, and where it could take them. They had more than just dreams, they were gathering tools to build them.

For over two years now, Fiona, along with co-teacher Vaibhav Mathur, has been lovingly encouraging them to learn art, reading, drama, ‘almost everything’ their little minds will absorb. You could see they did.

Even in those moments I felt inspired to ask more questions of my own life, to write more. But mostly I was reminded of, and amused at the perceptions and beliefs we hold. It’s a good practice then to have them ripped, especially by the glass-sharp transparency of children.

As he sat opposite me on another desk, not taking notes, preferring to read-from-memory, Sunil, asked earnestly, as if in a bit of a battle about it in his own life, ‘Ma’am, have you struggled? With your writing.’ What happens when someone doesn’t like what you do?

While I told him I listened with an open mind, and learned to trust myself, I hoped he would too, and that his world would allow him that.

Studying the slums outside, framed in class windows; a patchwork of blue plastic sheets for the monsoon, dish antennas, and rusting tin roofs, I pondered the next question.

As I waved goodbye to them later, I realized that I did see new beauty, and new poetry. In them.

The author is a freelance writer, counsellor and life coach who likes to study the colours in people and things. Her writing credits include The CS Monitor, Boston, Gulf News, Kummpani (Finland), India Today Travel Plus, TOI and Femina. She facilitates workshops in Creative writing, life skills, and Waking up to Yourself. She can be reached at [email protected].