Working with adolescents in a school like Shishuvan meant living all the values that you might want to teach. The structure of the school allowed for a lot of experiments and explorations to view life differently. If I had to specifically mention a few incidents, I can recall a sequence of three significant events. Tolerance is certainly not something that can be taught. It can only be explored time and again – every time a political party feels compelled to exhibit its power over the citizens, every time there is a bomb blast and every time a teacher chooses to punish a student. Tolerance, as I understand, is accepting people and situations as they are and being “OK” with the differences, similarities and individual choices. Obviously, it is easier said than done.

However, while exploring one’s thoughts, actions and beliefs, tolerance cannot really be taught as an isolated lesson. I believe it has to be a journey filled with experiences of situations that help one to explore one’s beliefs and actions rather than manipulate the session to lead the participants to believe “the right thing”.

The experiences I am talking about are mere milestones while the conversations with students happened over three years in class, outside class, during breaks, during exams, during field trips and annual days and over Facebook and Gtalk chats!

The first significant event was a class on ‘Stereotypes’. Words like prejudice, beliefs, stereotypes, racism were thrown open to the students and written on the blackboard. The facilitators were energetic and calm at the same time. They had already explored the activities and their personal views about the same. 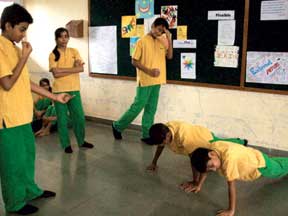 Session 1
Ice breaker: Students began by saying their names in different tones accompanying it with action.

Activity: Students were asked to make a story based on key words provided to them such as: Nurse, Pilot, Mother, Father, Paintbrush, football … etc.

They worked in groups to create these stories and shared it with the larger group. Observations were made on whether the characters allotted and the roles allotted to them denoted any stereotypes. Gender biases associated with different professions were also touched upon. For instance, a nurse was typically a female while a pilot was a male. This was subtly brought to the student’s awareness by questions like what prompted them to create the characters, the plot, and the roles of each member involved.

As a next step, they were asked to create a story which managed to stay away from stereotypes as much as possible.

Summary: While there was no intention to direct the students to think in a particular way when the class was in session, it was however aimed at exploring different ways of thinking through stories. The session however, did not explore their personal experiences right away and only established the base for it.

(Planning this session demanded honesty on the part of the facilitator. We started questioning our own beliefs such as whether in our endeavour to open up minds, were we subtly insisting that only if a nurse was a male, did it help break stereotypes? This made us a little more cautious while conducting the sessions and we did steer away from directing a fixed line of thought to some extent).

Session 2
Ice breaker: The sun shines on…. …
This ‘game’ is played in groups. Students stand in a circle and mention their preferences or experiences. For example, one student steps forward and says “the sun shines on all those who like ice cream” – All those who agree with the statement, form a cluster. In the course of the entire activity, different clusters are formed and broken.

De-briefing: The learning that came from students denoted that we all have different preferences. We may not be friends but a lot of us like similar things as well. Therefore we need to understand our classmates a little more.

(I believe oftentimes intolerance is a result of not really knowing the person or understanding where they are coming from. With familiarity, one becomes more open to or at least willing to consider another’s point of view…though it doesn’t guarantee acceptance or change in attitude) 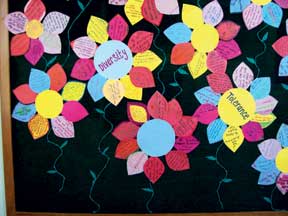 Session 3
The group had spent about 6 weeks learning about the life of Kabir through stories and poetry to put up an Annual Day play on the life and learning of Kabir. The poetry is something that stayed with them. While they agreed or not with his thoughts, their interpretations were based on the experiences they had while creating the play – on the different ways in which they interacted with Kabir’s poetry.

Ice breaker
Irish Duel
Each person makes a shield of his left palm which is placed on the lower back and uses the right fore finger as a sword to poke the others. One is allowed to poke in the area of the palm only. The aim is to poke as many people as many times as you can and simultaneously avoid getting poked by others.

If time permits and your school structure allows, do take it as a 40 minute class. However, if not, then each activity can be dealt with in isolation, only condition being have CONVERSATIONS/DIALOGUES. This is the most important aspect.

Some brief recommendations on integrated learning:

These are again just some starters – surely more will emerge once we start thinking deeper about these issues and about the various areas of our lives that are affected by the issues of inequality and prejudgments at so many levels. The key thing here is to keep questioning all that we already know, and all that we think we know.

The author is currently working as a Project head for Arts Academy – looking at enhancing the role of arts to build life skills amongst slum children. She can be reached at priyanka.manan@gmail.com.

Opening minds by opening hearts
Teaching children ‘to be’
“What can I do?”