“Son, you are a boy. You should wear your own clothes, not your sister’s.”
“But I want to be a fairy! And why do you keep saying I’m a boy when I’m a girl?”
“Because you are like your brother, not like your sister. Boys are boys and girls are girls, Guthli.”

This conversation is an excerpt from Kanak Shashi’s book Guthli has Wings (2019), published by Tulika Books and recommended for readers above the age of six. If Guthli were a student at your school, how would you interact with her? Knowing that her home environment does not affirm her gender identity or her personal understanding of who she is, what would you do in order to create a safe and welcoming atmosphere for her? The easy and spineless thing to do would be to shut her down, and get her to fall in line. The challenging and humane response would be to listen to what she is going through, ask her about the support she needs, look for useful resources, and work with the students and teachers to get her what she needs to thrive. 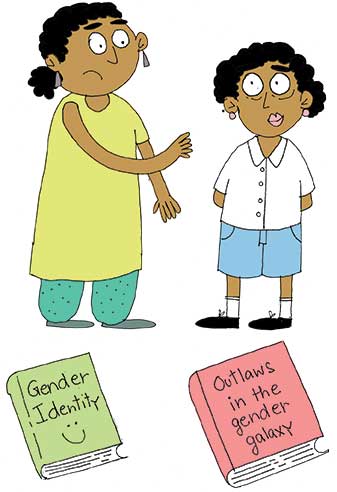 Uncertainty in the classroom can be a source of moral panic when you are faced with a situation that you are not trained to handle, or one that destabilizes your deeply held beliefs. It can also be an opportunity to admit that there are things you do not know, and that you need to learn about. A pamphlet titled ‘Answers to Your Questions: About Transgender People, Gender Identity, and Gender Expression’ (2014) published by the American Psychological Association states, “Gender identity refers to a person’s internal sense of being male, female, or something else; gender expression refers to the way a person communicates gender identity to others through behaviour, clothing, hairstyles, voice, or body characteristics.” Your gender identity may not coincide with the sex mentioned on your birth certificate. Check out https://www.apa.org/topics/lgbt/transgender.pdf to learn more about the difference between sex and gender, and to figure out what it means to be transgender, intersex and genderqueer.

Guthli identifies as a girl. The author affirms this gender identity by referring to Guthli as a girl, and by using Guthli’s preferred pronoun ‘she’. Guthli’s mother takes a while to come to terms with her daughter’s gender identity. She insists that Guthli is a boy, and her son. Frustrated by the lack of acceptance in her own family, and the constant misgendering, Guthli becomes quiet and withdrawn. She prefers to spend her time talking to trees and chickens rather than human beings who disappoint her. The sound of her chatter vanishes from the house, and this is what makes Guthli’s mother have a change of heart. She brings Guthli a frock, and says, “Wear it and be what you want.” Guthli wears the new frock, and dances with joy. She imagines herself as a golden bird flying high up in the sky, “over all the rules of the world…that said she was a boy because she was born with a boy’s body, and not the girl she knew she was.”

To learn more about misgendering and preferred pronouns, look up GLSEN (https://www.glsen.org). This is a New-York based organization that works closely with schools to end discrimination, harassment and bullying based on people’s sexual orientation, gender identity and gender expression. Their online publication ‘Pronouns: A Resource Supporting Transgender and Gender Nonconforming (GNC) Educators and Students’ states, “Misgendering refers to the experience of being labelled by others as a gender other than the one that a person identifies with. The essential thing to do after learning someone’s pronouns is remembering to use those pronouns when referring to that person. If you accidentally use the wrong pronoun when identifying someone, please correct yourself in front of that person and begin using the right pronoun. Everyone makes mistakes, and making visible your work to respect and use someone’s pronoun after a mistake is an important moment to take.” Read more at https://www.glsen.org/sites/default/files/GLSEN%20Pronouns%20Resource.pdf. 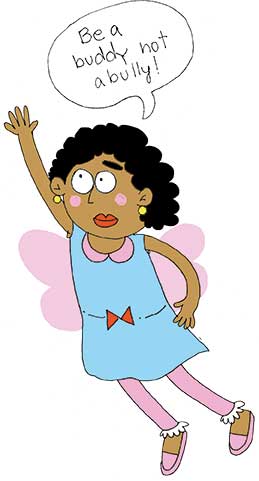 If young students like Guthli can show the courage to challenge conventional ideas about gender, and define their own place in the world, how can you stand along with them as an ally? Allyship involves risk-taking. Be prepared to encounter resistance from colleagues and students as you recognize and make visible the gendered dimensions of structures and routines within the school system – uniforms, choice of sports, segregation of toilets, etc. In the book No Outlaws in the Gender Galaxy (2015), published by Zubaan, authors Chayanika Shah, Raj Merchant, Shals Mahajan and Smriti Nevatia write, “Uniform regulations make gender boundaries rigid and compel gender definition. Such a marker could be erased if there were a greater choice or leeway in the matter of skirts/trousers, blouses/shirts, etc.” Some students experience a great deal of distress when their gender identity and gender expression are not validated. Resist the temptation to pathologize, diagnose or imply in any way that the student has a mental disorder. Get some advice from a mental health professional trained in queer affirmative practice.

These students should not be viewed as troublemakers who dress differently in order to seek attention. The problem lies with society’s inability to make peace with diversity, and its obsession with ‘uniformity’. In Be a buddy, not a bully! Experiences of sexual and gender minority youth in Tamil Nadu schools (2019) published by UNESCO, authors Sunil Menon C., Venkatesan Chakrapani and Sarita Jadav point out that sexual and gender minority youth in schools are exposed to “various forms of bullying on the basis of their perceived gender identity and expression, or sexual orientation.” Their observations come from a study conducted by a community-based organization called Sahodaran. The forms of bullying identified by the participants of this study include physical bullying, verbal bullying, social bullying, sexual bullying, and forced sex. I prefer to use the word ‘violence’ to describe these behaviours. ‘Bullying’ seems somewhat euphemistic.

It hurts to think about the ways in which these students’ safety is compromised in learning environments that are meant to serve as places of intellectual development and emotional nourishment. You cannot fix everything at one go but you can certainly make a difference in your own school by utilizing some of the resources that have been mentioned in this article. It can be overwhelming to begin learning about something that is totally new to you but this is something that students are expected to do all the time. If they can do it, so can you.

The author works at the intersection of peace education, gender equality and queer rights. He has an M.Phil. in English Language Education, and several years of experience in working with students and teachers. He can be reached at [email protected].