‘Remember your basic physics class, and now find your centre of gravity’, I tell my young dance students.

‘Strengthen your spine and find the inherent balance of your body. To leap and jump in the air and perform aerial movements, remember to accept gravity and then take off from it, by lightening your body. You can do it if you give yourself the necessary momentum to leap. Sit low before you jump as that will give you momentum and velocity.’

Am I taking a dance class or physics class?
I teach Bharatanatyam which is a classical dance form with origins in the southern state of Tamil Nadu, India. Today it is one of the most popular among all Indian classical dance forms with performers and teachers spread across the world.

Bharatanatyam is known for its architectonic beauty and grammar, with the body centred on the meridian, with clear and precise geometric and linear extensions of the limbs, creating unambiguous triangles and lines with body and limbs; its extensive use of hand gestures (mudra), sculpturesque contours and the fine art of expression (abhinaya).

So why am I talking physics?
Let us look at the most prominent image of a dancer. What comes to one’s mind is the grand image of Nataraja – The dancing Shiva

This static image spells an inordinate dynamism and energy. With the left leg lifted, while the body is stable and strong on the right foot, with the right palm held as a benediction, while the left palm points to the left foot, even as Shiva is encapsulated in a ring of fire, and resonates with fantastic symbology and deep meaning. 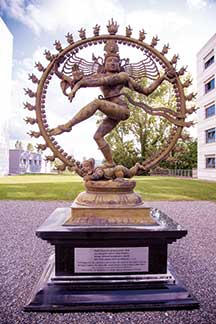 This dynamic composition of Shiva as Nataraja expresses movement and stasis, rhythm and expression, overt symbology and deep philosophy in the simple configuration of the image. In a single image, it combines Lord Shiva’s roles as a creator, preserver, and destroyer of the universe and conveys the Indian concept of the never-ending cycle of time. Its present form evolved under the Chola rule in South India.

Shiva, as Nataraja, is the ultimate metaphor of dynamic energy and immovable stasis.
It is indeed extremely interesting to note that in 2004, a 2m statue of the dancing Shiva or Nataraja, was unveiled at CERN, the European Centre for Research in Particle Physics in Geneva. A plaque next to the statue explains the significance of the metaphor of Shiva’s cosmic dance with quotations from Fritzof Capra: “Hundreds of years ago, Indian artists created visual images of dancing Shiva in a beautiful series of bronzes. In our time, physicists have used the most advanced technology to portray the patterns of the cosmic dance. The metaphor of the cosmic dance thus unifies ancient mythology, religious art, and modern physics.”

Fritzof Capra goes on to elaborate this scientific metaphor, in his article, ‘The Dance of Shiva: The Hindu View of Matter in the Light of Modern Physics’; and later in the The Tao of Physics, where he beautifully relates Nataraja’s dance with modern physics.

He says that “every subatomic particle not only performs an energy dance, but also is an energy dance; a pulsating process of creation and destruction…without end…For the modern physicists, then, Shiva’s dance is the dance of subatomic matter. As in Hindu mythology, it is a continual dance of creation and destruction involving the whole cosmos; the basis of all existence and of all natural phenomena.”

And it is this image that every dancer in India, learns to hold and balance first and then hold perfectly! Dance, or for that matter, movement in any form is all about physics, from static to kinetic energy, from stasis to movement; it is about the momentum given by the mind through its agents thoughts, to the body to move in a particular way, as directed by mood, in the case of impromptu movement, and by raining and creativity, in the case of trained movement or dance.

While the student understands basic principles of physics and its usage in dance as a young student; as he or she understands and gets comfortable with one’s own body and the limits that it can be stretched to, then the dancer starts to explore the limits, and thus we see extraordinary dancers, defy gravity in their leaps, bend the laws of physics as it were by performing anti clockwise jumps and turns; contort the body in unimaginable ways, and be lifted and carried like a feather.

All this cannot happen without the understanding of the laws of physics and its adaptation to the body. There is no dance without understanding physics, and physics in its very nature is a dance of the law of the universe!

Indian dance while understanding and using the physical laws of nature for its grammar and idiom brings to the viewer the unique metaphysical constructs of Indian thought and philosophy.

The author is a distinguished classical dancer, teacher, and choreographer. She is also a senior officer in the Indian Railways and holds a Doctorate in Tourism and Culture. She received the Padmashri in 2007 and the Sangeet Natak Akademi award in 2009. She is a TED speaker, whose Ted talk is now rated by Huffington Post, as the 1st of 5 greatest TED talks by Indians. She can be reached at [email protected].