Varadenhalli Primary school in Bengaluru lies at the entrance to the Centre For Learning, where I work. The children there now receive free uniforms from the government. For many families, this means that they don’t have to bear the increasing costs of clothes and shoes over their children’s growing years. For the children, it means that each of them will have at least two sets of assured clothes that they can count on to wear to school.

The place of uniforms for a large percentage of families in our country lies in placing parents and children at further ease through the schooling years. Children can get up in the morning knowing that they will sit in their classrooms dressed no differently from the other children in their class.

I believe that the idea of the uniform was first introduced in 16th century British schools to bring about more discipline. Somehow, it was thought that wearing the same shorts and shirts would bring a certain order to a learning space, that it would bring a required discipline to a chaotic situation. It seems that the intention was not to address class differences, but to place children into a more regimented setting. This is the same intention that informs the presence of the uniform in many institutions: the military, the hospital, the factory, the restaurant. As in the school, people in these institutions have a fixed role to perform. The work is prescribed by authorities, the workers must follow. It is almost as though they were worker-ants, going through their routine unquestioningly, looking almost identical.

We cannot talk of schools as one. In our own area there are primary and middle government schools and one private school in Varadenahalli, and a middle school in nearby Bachenhatti. Near the Tippagondanahalli dam and reservoir, 10 minutes away, is a private school, nestled beneath Honge trees. Magadi, 10 kilometers in the other direction, has several schools, private, government, madarasas. And there is CFL.

All of the government and private schools, except us, have uniforms. Surely the free uniform lessens a burden and surely the presence of a uniform makes dress less of a discriminating factor for children. I am not sure about the regimental impact of the uniform. The uniform is a feature that came to stay with the advent of certain British educational norms. Whether it has played a subduing role in rowdy classrooms is questionable. In our nearby schools, tumult in a classroom probably has more to do with the fact that one teacher has to handle alone 30 children spanning 6 to 10 years. 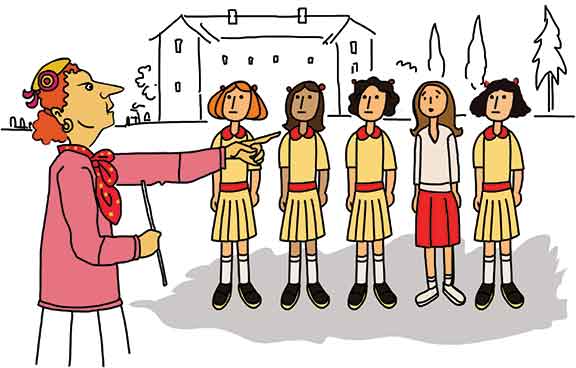 Now here is the irony. Recently, I learned that the uniform is a source of financial stress in the Tippagondanahalli private school. Children are required to wear not one but two fairly elaborate uniforms. Growing children can stretch one set of uniforms only so much. Many families aspire to send their children to this school. They spend a fair amount on fees, where the government school in their own village would be free, clearly favouring the attention their children receive in the private school. And now, over and above the substantial fees, they have to pay for two uniforms.

So here is a case where the uniform is no leveller. It distinctly puts aside those who can afford and those who cannot. An element of show and prestige may be at play. By putting their children into blouses and pinafores and ties and badges, a school may attempt to project its status through its just-so uniforms. Or maybe there is a tie-up with a prescribed uniform-provider, who profits from the spoils.

As for personal recollections:
I went to a school in Bombay where the girls had the best uniform in the whole city. We wore sacks. Cool cotton sacks with grey pinstripes and woollen sashes. The cotton was affordable, so too the tailoring. Ideal for muggy Bombay weather. The woollen sashes were costly. So at home this meant that we kept them carefully and that we learned to darn when holes appeared. The one ordeal was ironing our sacks and polishing our Bata or Carona sneakers at night. Sometimes we would do quick rub-the-white-chalk-on jobs. We would announce who was first, second, and third, when it came to ironing. Having a uniform meant getting it ready to wear for the morning. If you were organized, you arranged it all at night. If you weren’t, the morning was a scramble. If you got wet in the rain on the way to school, you could go to the art room and iron at least part of your uniform dry.

The angst came when we had to attend practices on the weekend. Children came from families of varying means. Blue jeans were a huge status symbol and only attainable from overseas, Levi’s and Wranglers. So too your shoes, Adidas or otherwise. Coming to school on a weekend involved much weighing of the favourite thing to wear, what would look becoming. At home, on our near-wild campus by the sea, I happily roamed around in patchy Bermuda shorts, striped t-shirts and Hawai chappals. When it came to a weekend at school I was terribly conscious of how I would look. I think I was relieved that I didn’t have to iron my uniform for the weekend, but finding what was just right for weekend school wasn’t easy.

So there you are, for the large majority of school-going children, our government’s decision to provide free uniforms is hugely welcome. For another large proportion of families who send their children to a range of private schools, the prescribed school dress may continue to pose a problem, putting social and financial stress on select families.

With thanks to Kamala Mukunda for suggestions.

The author works at the Centre for Learning, Bengaluru. She teaches social science and art and is a keen photographer. She can be reached at [email protected].