Teachers are human. They need periodic nudges to remind them how powerful they are.

The demands of a regular school day often lulls them into thinking an efficient run through has been good enough. But every teaching day gone by without having inspired a child or forced them to think has been a monumental, criminal waste. It is one more day of abandonment; another 24 hours we have left them at the mercy of the Radio FM blaring its Fevicol song, the late night serial eulogizing weeping women, or a facebook update celebrating risky behaviour.

For all the bluster of India’s economic forges, equality is struggling to happen here. There is a swelling unease at the widening chasms: Indo-Pak, VIP-aam aadmi, police-citizen, traditionalist-progressive, dalit-brahmin, penthouse class-basement underclass…all brewing under the dark shadow of corruption, a hazed out bureaucracy and our dyslexic government. Watching this national hotchpotch going bad is the mushrooming middle class, nursing its heartburn and fighting down a reflux.

The regular textbook can hardly justify and limit the knowledge exchange taking place in the classroom under these circumstances. Students need help, more than at any other time in Indian history, to make sense of their environment. The Indian ionosphere is sick with toxin. There are dishonest advertisements, sexually charged songs, irresponsible messages of pornography, pressures of competition, and the constant struggle for acceptance and a dignified existence.

Parents are just about able to keep their physical nurture going in a system that will not guarantee them efficiency nor safety and certainly not any facility. That leaves the teachers with classrooms that have become the new ground zero, the only spaces with a semblance of sanctity, authority, and naivety conducive to instilling healthy beliefs. The software wiring of young minds has to happen in schools while the students are young enough to harbour an inherent sense of right and wrong, fair and unjust.

Teachers have to remind themselves often of the huge investments they are making in their students. Their children listen to them. Classes have to be told that the human reality is changing and that we need new recipes for survival. They have to be spoken to of the skewed gender ratio that is threatening peace and democracy in the nation. Explain how we are creating bare branches on family trees by killing baby girls before they are born. What are the surplus men going to do? They will live and roam in loose groups of unattached, unemployable cesspools of anger, with no stake in societal order; all the time blaming successful women for their own failures. 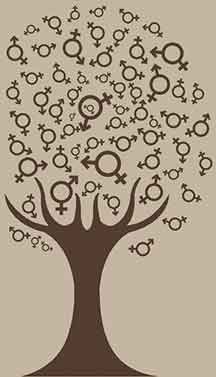 This generation must not grow up thinking that girls are fairy tale characters, and boys prince charmings on horseback. They need to appreciate that the two genders are real people with real problems. They will see that the roles that worked when we were a farming community no longer apply in our modern, industrialized, information driven democracy. Girls deserve permission to be as naughty as boys who in turn ought to feel free to use their tear ducts! Boys should be able to study psychology and girls should be able to join the National Defence Academy. Far more than femininity or masculinity, it is humanity that our survival depends on today.

In time, the young will grow up to realize the challenges ahead; the immutable but bitter truth that whenever a power equation is threatened, balance has to be wrested; it has never been given on a platter. For this, they have to develop an ease with discourse, debate, dissent. The current rigid hierarchical structures employed in most schools heap shame upon them. They need liberation to follow their hearts and listen to their own voices so they can grow up with a strong sense of self-esteem. It will be the modern young’s duty to contest and protest. Every word, every thought, every gesture counts. Fundamental rights for all, irrespective of caste, colour, creed, gender, status, religion are not just western values; they are universal, human values.

The human race is in a process of evolution, of evening out power. The rich have fortressed themselves, much like the proverbial ostrich. While the rest of us wait for speedy justice, accountable leaders, and a protective police force, we can embrace gender sensitization. We can change our behaviour, beginning with an empathy with our own and the other gender. It is time to examine long held beliefs and question the realities we have taken for granted.

We are creating a very close, inter- dependent and transparent world. No one can survive in this spacecraft-like claustrophobic closeness unless they are good human beings. Gender sensitization is a step in that direction. There is a call for systemic change. If we do not alter our ways, we are going to leave behind a terrifying world for our children. We owe our young the space and freedom to achieve their highest potential.

Teachers are not merely uniquely placed or wholly equipped to prevent gender becoming their students’ destinies; they in fact are the only ones in any position to do so.