In the late Sixties, there were relatively few options that a student could pursue after school. I was not interested in engineering, so the IITs did not really attract me, I had no desire to be a doctor either, so I chose to do my undergraduation in the sciences. My schooling was at the St George’s College in Mussoorie. In the school finals – the Senior Cambridge examination – I had done slightly better in chemistry than I did in the other science subjects so I opted for a B. Sc. in chemistry, with physics and mathematics as ancillary subjects at Loyola College, Madras.

My initial choice might not have been very well considered, but as the years passed, I was glad that I studied chemistry. I found that I was fascinated by organic chemistry – particularly organic synthesis, mechanisms, structures, and molecular shapes. The complexity of biology scared me at that time, and I found myself more interested in physical chemistry, and in particular, theory. The other branches of chemistry – inorganic or analytical – were remote and more descriptive, at least the way they were taught then. 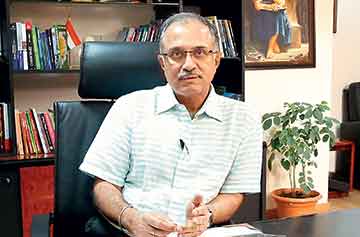 When I graduated from Loyola, there seemed to be only one logical option, to do my M. Sc. at IIT Kanpur, where there was a truly stellar chemistry department. The faculty was excellent; almost all of them were already leaders in the field, and many have continued to be active researchers, which is remarkable considering that it has been over four decades now! It was in Kanpur that I really learned the best of all the branches – organic, inorganic, physical … and I had a chance to take courses in physics as well. The curriculum at IIT Kanpur was far ahead of its times. There was a separate course in mathematics for chemists, one on molecular biology, and one that I can vividly recall to this day, on symmetry. The fact that a chemistry student could take a physics course (for credit!) in 1974 was truly enabling, and when I decided to go in for a Ph. D. in chemistry, it was clear to me that I would work in chemical physics, at the interface of the two disciplines.

By the time I finished my thesis, many theoretical chemists were getting very excited about chaos theory – partly to explain aspects of chemical reactions, but also for its own sake. This provided me an introduction and entry into the field of dynamical systems, the area that I have been working in for the last 30 or more years, in one way or the other. My interests have been in different aspects of non-linear dynamics applied to chemistry, to physics and, increasingly over the past few years, to biological problems, to “systems” biology.

The fortunate choice that I made to study chemistry for the undergraduate degree meant that all the other disciplines where my research path has wandered through have been easily accessible. Even biology, an area I did not really work in until the 1990s, had so many familiar concepts at its heart that it was less daunting than it might seem.

More vibrant now
The study of chemistry today is both more necessary than ever, and more vibrant than ever. Chemistry is taught differently – there are important new principles that have been discovered, and the systematics of the subject have also been better elucidated. There is much less emphasis on rote, and more on a logical approach to the subject. The interaction with other disciplines is also more emphasized – in particular with materials science, where the impact of new methods of synthesis has been considerable; with environmental science, where the so-called green chemistry has been fundamental; and in chemical biology. The impact of chemistry in biology – in the design and discovery of new drugs, in recognizing the role of many different molecules in biological processes – has been significant. However, there is an urgent need to convey these ideas and applications, or at least introduce some flavour of this excitement, to students early in their courses, to see that the subject retains its allure.

I guess the main advantage of chemistry as a subject is that it occupies a certain type of central ground. By answering the question “What is this made of?” (which is one way of describing the main preoccupations of chemists) one is led, inevitably, to questions in all other directions, encouraging multi-disciplinarity, collaboration, and continued learning. This has allowed me to be intellectually flexible, to move to problems that intrigued me. In that sense, I think I was lucky I chose to study chemistry.

The author is Vice Chancellor, University of Hyderabad. He can be reached at r.ramaswamy@gmail.com.