I have been teaching mathematics for the last 20 years. Mathematics is often regarded with fear and is perceived as a difficult subject. The students are overloaded with theorems and formulae which they are taught through the traditional lecture method. So some students develop an aversion to the subject.

I have always wondered if this is a global problem. In 2018, when I was selected as a Fulbright Teacher Excellence and Achievement Fellow, I got an opportunity to observe the American school system for six weeks. During one of my visits to a school, I observed two students making a rap song on coordinate geometry. This brought home to me that rap music is the craze of the new generation.

After returning to India, I wanted to experiment with my students. In class 7, when I introduced the topic of ‘Operations on integers’, I noticed that some students were struggling with the rules. I was disheartened that in spite of my different attempts, the students were unable to recall these rules. That is when I thought of trying the rap song method. 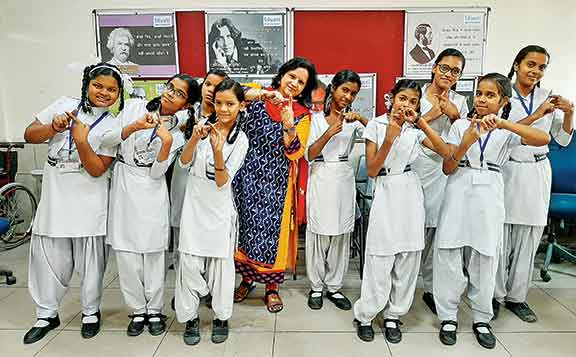 So I told the students, ‘Let’s make up a song for the rules’. The students were vey excited. Although, they were finding difficulty rhyming the words, with collaborative effort, we developed this rap song:

Rap song on operations on integers
When you have to add or subtract integers
Don’t bother your brothers or sisters
Positive plus positive, we add always
That you know since you were in your nappies
Negative plus negative we add again
This you must always retain
But positive plus negative we subtract, my friend
Never forget this rule, I recommend
It’s the same rule you have to follow
If adding negative with positive, my fellow
But one important thing more to get the correct answers
The sign of the answer is same as the sign of the greater of the two numbers
Now you know the rules
Never behave like fools
Didn’t we tell, my dear
There is nothing to fear

This rap song had a magical effect on the students. The students were more attentive and each group tried to sing it in a different tune. Their involvement not only generated interest in the topic, it also enlivened the classroom environment. I think because they had made the song themselves, it was more effective. The students exclaimed, “This is so easy! Can we make such songs for every concept?” Now, my students are mostly correct when adding or subtracting integers.

It was an eye opener for me too, that the methods and strategies that we adopt for teaching should be synchronized with current trends and needs of the students. I think the rap song was effective because the next generation was able to relate to the music of the contemporary times.

I realized that integrating art with maths can give amazing results. This activity was liked by these students because the next generation is crazy about rap songs. The tune and rhythm brought them to their toes. I came to the conclusion that maths should be related to everyday situations, not just for application of learning but also for learning the concepts.

The author is a Mathematics teacher working in a senior Secondary school in Delhi, India. With an experience of 20 years, she tries to experiment in her teaching strategies to enliven the classroom environment. She can be reached at manishapavi65@gmail.com.