A friend of mine was in town recently, and among the topics that came up in our profound discussions was that of the Model United Nations conventions. This wasn’t strange, given that much of our early interaction came about as a result of various (make that two) MUNs. He has a lot more experience in this field than I do, and hence was able to contribute more worthy points to the discussion. All I did was to start the ball rolling with a casual ‘So how helpful do you think MUNning has been/will be for your career?’

(In the course of this article I will refer to the act of participating in a Model UN convention, at a college or school level, as MUNning. Also, I should probably mention that the friend in question is currently doing a degree in Global Affairs, and recently did a three-month internship at the UN in New York.)

He thought for a bit, and said that there was no ‘direct’ and easily ascertainable benefit to his professional life. However, the practice of research he’d developed, the ability to read and retain information from newspapers and online archives – that was beyond priceless for a budding wannabe diplomat. What MUNning had cultivated in him, he said, was the ability to care about people in other countries, to feel responsible for one’s own decisions and the impact his interaction with his fellow ‘delegates’ had on countless lives. ‘I loved the feeling of representing someone’ he said, ‘and feeling responsible for so many people’. That experience, as staged as it might have been, has definitely had some kind of weight on his decision to work not just ‘in’ his country, but ‘for’ it.

After that, the conversation veered off this earnest course, chiefly because I couldn’t keep a straight face at what I thought was a pompous declaration. He was already, I thought, beginning to sound the part of a high-profile UN employee, a la Shashi Tharoor. 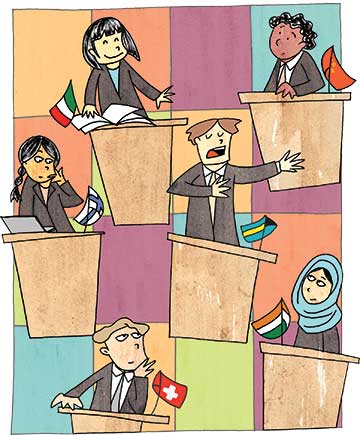 Wording quibbles aside, I do not doubt the sincerity of my friend’s statement. I haven’t been a part of many MUNs myself (as a delegate), but I have seen plenty of MUNners. For most, the four-day convention seems a fun excuse to dress up in their corporate, campus-placement best, spend a few hours speaking about themselves in third person and then, of course, have the fun backslapping and catching-up session after committees and councils disperse for the day. Many of those who do best in the council room are students who double as debaters for the remaining three-fourths of the academic year, who are familiar with how best to turn a phrase, how to distract the watching judge (in this case, the Chair) from his/her weaknesses by strategically attacking an opposing delegate’s language. I have seen three-hour-long sessions where two or three principal delegates wrangled over the ‘definition’ of a particular word in the stated agenda. Yes, it is very important that everyone be absolutely clear on what exactly a term like ‘terrorism’ means, but when you have only two days, comprising two six-hour sessions each, can you really afford to spend one-fourth of that time defining something?

Then again, this might just be how exactly the ‘real’ UN works. Which, my less-UN-more-subaltern-supportive friends would argue, explains so much.

But coming back to my larger point, that of whether this makes any constructive ‘difference’ to the participant. There are always going to be some people who have entered the MUN (or similar, ‘model’ game, such as Moot Courts or Model Cabinet sessions) for nothing but the superficial glamour such activities hold in some imaginations. There is a thrill to dressing up, to feeling important and play-acting as someone else. That’s why the students in theatre clubs in college are usually considered ‘cool’ and ‘edgy’. There is absolutely nothing wrong with enjoying this aspect of a MUN, and I confess I have felt a thrill of excitement myself at the prospect of wearing high heels and strutting around the college corridors in a black, ‘corporate looking’ skirt.

I do, however, believe that one can take something more permanent than a photo-op from the experience. My friend is right – MUNs do cultivate in their more sincere participants a feeling of responsibility, an idea of the connectedness of the world and how one’s actions in a council room can affect millions of lives. These conventions ‘dress up’ the everyday, ordinary practice of reading the newspaper or tuning into international events, and make them desirable, things that lead to a better chance of victory in what is, at the end of the day, a competition for ‘best delegate’. For kids who enter that contest at least three times a year (and in DU, certainly more often, with every college putting up its own MUN), the pursuit of this knowledge becomes a regular activity – regular enough that they may, at the end of those few months of frenzied MUNning – have a fairly good grasp of at least one or two countries’ stances on various issues of ‘international importance’.

And there’s nothing quite like the feeling of throwing your weight behind a ‘foreign’ opinion, and finding, surprisingly maybe, that you can empathize with it. For instance, my friend A was assigned to represent Somalia at a MUN convention. Her reading on the country exposed her to their policies on prostitution, which, she discovered, were much more ‘advanced’ and enlightened than India, a country more economically ‘developed’. As a representative of the Philippines in another convention, she was given the opportunity to read up on the history of a country that Indian students rarely, if ever, encounter in their textbooks. The concept of ‘comfort women’ in particular touched and troubled her, and she took up issues of women’s rights with a conviction and passion that was quite amazing.

I think MUNs give the opportunity of learning, first hand, that the world truly is an interconnected place, that decisions made by one delegate can alter lives in another country altogether. It’s about lobbying, having people on your side when you want to make a change, and that means reaching out and trying to understand where they are coming from. What history has taught them, and in return, what that history can teach you.

So yes, some of my friends might sneer and call MUNning a ‘dress up’ game; it is a dress up game, but it is also much more. All good dress up games are more, eventually. They teach us about the importance of thinking like another person, of putting yourself in someone else’s shoes, and thus, slowly, quietly, subtly, they teach you the importance of being willing to care about someone who is, at the end of the day, not all that different from yourself.

The author is a freelance editor and writer based in Hyderabad. She can be reached at achala.upendran@gmail.com.