During the last couple of years at high school, I didn’t have any idea about what I wanted to study in college. I added and subtracted my interests and hobbies, my favourite subjects and the ones I would be happy to leave behind. I examined various permutations and combinations of the above sets. Finally, I figured out what I wanted to study. So “based on my calculations”, I decided that I wanted to graduate in mathematics, and that I was looking forward to studying math during my undergraduate years. I announced this to my family, confident that I could prove how I had arrived at this decision.

Unfortunately, they were not convinced. Most of them asked me about my plans after I earned the degree. I had not really explored that question. They asked me what kind of job I hoped to get. That really got me thinking. My parents have always encouraged me to work on things that interest me. So I set out to solve the new issue by breaking the problem into smaller pieces, to understand how mathematics is linked to each and every branch of study.

I understood that most people don’t classify mathematics as a science in the way they do physics, biology, and chemistry, because there is not much scope for hands-on experimentation, for getting one’s hands dirty, for digging deep into the nature of humans and humanity. It’s considered to be very theoretical, with a lot of written work and problem-solving. Although this may be true to a certain degree, mathematics is much more than research papers and seminars. It has far-reaching impact on almost everything, and is closely linked to the other sciences. There is so much possibility with mathematics nowadays. 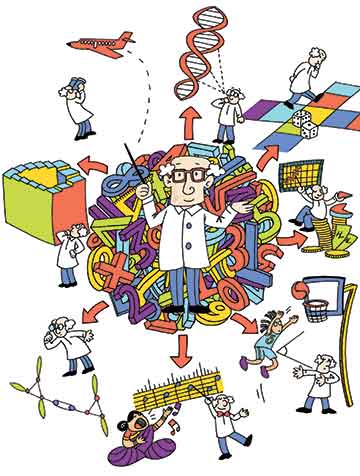 For example, population genetics is one such field. It sounds like biology, right? It is the study of distribution and changes in the gene frequency in the human population. Yet this has always been a mathematical discipline. Mathematicians use biological principles like natural selection and mutation, along with data collected from sample groups to trace back genes, as well as to predict the genes that will be present in our future generations.

Chemistry and math are not separate either. There is a branch of research called chemical graph theory, which as the name suggests, involves the application of graph theory to mathematical modelling of chemical phenomena. You just cannot escape math! It permeates into most fields.

Are you fascinated by airplanes? It’s not just engineers and physicists whose expertise is required in the design of safely functioning aircraft. A mathematician’s knowledge can be irreplaceable because those who are taught and trained for a mathematics degree often have great critical thinking skills, which are used to analytically solve problems related to trajectories of flights and aerodynamics. Consider aircraft navigation. Using the various pieces of information given to them (direction of flight, distance of flight, cruising speed of aircraft, aircraft weight and balance information and weight of aircraft), mathematicians use their knowledge of vectors, functions and trigonometry to figure out the best possible route for a flight.

People who find solace in solving complicated integration equations and deriving proofs for theorems in geometry, can go into research or teaching. Many people think mathematics is a static field, but that is far from the truth. The fact is, if you dig deep into the matter and you are truly passionate about it, you can discover more about game theory or cryptography which have applications in a wide variety of industries like business, biotechnology, finance and artificial intelligence. In this way, mathematics is ever the same and always new at once.

Actuarial Science is a branch of science that uses mathematics and statistics to assess risk in various other fields of work like insurance. Mathematics students can pursue this career because they study topics like statistics and probability in depth. It is a well-known fact that mathematicians can get a job in business, finance, banking, and funding industry. As I deepened my research I realized a lot of mathematicians work for Wall Street in New York in some of the highest paying jobs in the world.

Have you ever seen any of Vi Hart’s videos? She calls herself a recreational mathemusician! Math doesn’t ever have to be boring, she talks about topics like logarithms and pi through videos in which she draws and sings. She even tells us why some infinities are bigger than other infinities (a famous line from John Green’s novel ‘The Fault in our Stars’). So, don’t ever think that it is impossible to combine interests like math and art or music together.

All sorts of sports require the advice of mathematicians. They are the ones who draw up player rankings based on certain facts, and use matrices and combinatory to determine playoff scenarios. Math can be used to help baseball players and basketball players improve their skills. Mathematicians can determine a player’s range (of shooting a basketball or hitting a baseball) based on their average hitting or throwing speed, and help them predict which angle will give them the greatest range.

There may be many people who don’t have much interest in mathematics because it seems too abstract sometimes, and it’s just numbers. But, there is in fact a theory that the whole universe is a giant mathematical object (we won’t get into that now!) My point is simply this: mathematics is used in every field, in every aspect of life, so I’m sure everyone can find a topic in math that interests them, whether it is linear algebra or topology, so give it a try!

The author is a B.Math (Hons) first year student at Indian Statistical Institute, Bangalore. She can be reached at raginirama@yahoo.com.