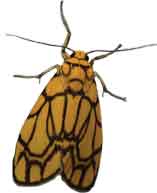 A new hobby that is attracting both amateurs and professionals alike is watching moths. Surprised? Don’t be, because people are beginning to discover that there is a lot more to moths than meets the eye or sometimes doesn’t meet the eye!

The Nature Watch series attempts to bring to your attention, not merely nature’s beautiful diversity, but also to dispel some persistent myths. One such misinterpretation has to do with moths. While their close sibling the butterflies are considered beauties worth worship, moths are treated with disdain – creatures of the night, bearers of ill omen. But there could be nothing more farther from the truth. Moths are as beautiful, if not more than butterflies, and how much more colourful – well let the photographs in this article speak for them. Moths are, though largely, but not entirely, nocturnal; there are day-flying and crepuscular moths too. As for their destructive reputation, they are no more destructive than the butterflies and more beneficial than them – take for example the silk industry.

Indeed, it is much easier watching moths than butterflies. No nets, no mad, wild chase, just sit and watch them come to you. You can rear moths too, as the silk farmers would testify; but first about moths. Moths are insects that belong to the Order Lepidoptera (Greek words: Lepidos=scale; pteron=wings). The Modern English word “moth” comes from Old English “moððe” (cf. Northumbrian “mohðe”). Those who study butterflies and moths are called lepidopterists. The term moth-ers (to be pronounced not as mother but as moth-er) has become common for those who are into mothing, i.e., watching moths. But it is butterflies that more often capture the attention when one discusses Lepidoptera; although there are currently an estimated 1,12,000 to 1,65,000 described species of butterflies and moths, the number of moths (96% of Lepidoptera are moths) far exceed those of butterflies with many species yet to be discovered!