All through my years of teaching at Kendriya Vidyalayas across the country, my mind was often struggling with the problem of bringing alive concepts in the classroom, by connecting them to the children’s imagination, as well as to their real world with its unique issues and concerns. My searches often went beyond methods and activities. And most surprisingly, the inspiration for building these relationships would suddenly emerge out of our classroom discussions – from the children themselves and their experiences.

This makes me feel that teaching is not all about physical preparation of TLMs* or activities. It is about being engaged with the minds of the children around you, their contexts and their concerns. In the 80s, discipline and punctuality were valued above everything. Nobody ever questioned these values. While scolding latecomers one winter Monday morning, I remember angrily asking in class, “Why do you come late to school? Does any one of you have to cook, clean and collect water at home?”

Visibly shaken by this retort, it was only then that I enquired into her life at home. This child, whose mother lived in the village, had to do all the jobs that her mother did before she came to school, and yet, she managed to get more than average grades.

The year was 1997. I was teaching Mending Wall by Robert Frost in Class X. We were discussing the words…
“Something there is that doesn’t love a wall,
That sends the frozen-ground-swell under it,
And spills the upper boulders in the sun; …

Before I built a wall, I’d ask to know
What I was walling-in or walling out,
And to whom I was like to give offense.”

They reminded me of Rabindranath Tagore’s words from the poem, “Where the mind is without Fear, which all the children knew by heart.
“Where the world has not been broken up into fragments
By narrow domestic walls,” 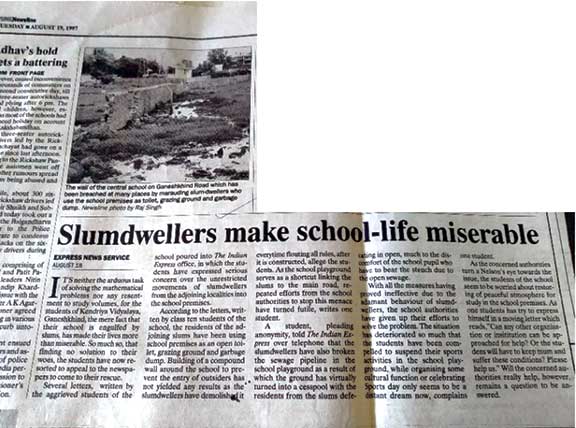 We began discussing all kinds of walls: of caste, class, privilege, ignorance… But it was patently obvious to me that the discussion did not really make sense to some… Their blank faces and bored expressions pushed me to a brink. Suddenly, someone mentioned the broken wall in our compound: the wall which was a bone of contention between the slums and the school.

And that’s when the discussion was transformed!

Our school was situated in a civilian area, sandwiched between two slums. The slum dwellers used the school playgrounds as a thoroughfare to cross from one slum to the other, as also to the market which supplied most of their needs. They even used our grounds for morning ablutions. This made it impossible for our children to play in the grounds and practice for their football or cricket matches. Attempts by the school to build a wall around our playground, so as to protect and develop it always met with resistance from the slum dwellers. Many a time, a wall had been built and then broken. In preparation for the annual sports, the grounds would be cleaned for practice and matches. But by morning, there would be litter and filth on the grounds. A lively discussion ensued, and I found myself asking how the words of the poem, “Mending Wall” could connect with the lives of the children so as to have them understand the impact of not only the words but to translate these words into action!

Every thinking teacher often asks herself this question, “When do I say that my children have learnt something? Is it when they understand, when they articulate? Is answering questions enough? Is the ability to explain something on a sheet of paper the real proof of learning?”

Alas, most educational efforts stop there. Our examination system tells us to ‘swallow and vomit’ blue ink marks on white paper to get a centum. Yet when these very same 100 markers face the real world, they are often baffled, defeated and disillusioned. Here was a live opportunity for these students to confront a real-life examination and meet its challenge.

Around that time, a local newspaper had started carrying a column on citizen’s voices. I had often brought the newspaper to class to show how different areas of the city were being covered, and how real and local issues of citizens were being discussed through these pages. The students asked me, “Were these problems being solved? How does writing to a newspaper solve problems?”

Someone piped up, “We could do it, too!” And that did it!

The next day, I decided to ask the children if they would like to write letters to the editor of the newspaper with their issues regarding their playground and ‘Mending the Wall’. And what a response I got! Yes, children poured out their woes – you see, they were deprived of their games by their playground being desecrated! It was a burning issue!

Now we decided to make it more real by submitting our letters to the newspaper office. And one of the girls offered to do so, as she lived next door to the office. So, the letters were written, collected and sent with our emissary in the hope of seeing some light at the end of a long tunnel! But does real life ever churn out such quick solutions?

The newspaper published a detailed report on the children’s story. The broken wall became the talk of the town. The leaders from the slum, the leader of a political party and the school committee took notice of the wall and the playground. A survey was done and promises were made.

Yet nothing happened in a day or even a year! Walls were built and walls were broken!

The journey of our struggle of mending the wall continued. Many different strategies were adopted; the use of force, the use of cooperation but the words of Robert Frost always rung true, “Something, there is that doesn’t love a wall.”

And then, differences slowly dissolved. As successive batches of children and authorities meditated on the wall, solutions of all hues came up. There were also friendly football and cricket matches between children on both sides of the wall. Understandings grew, pucca roads came up, toilets were built. The slum transformed into a settlement with pucca houses. The parents living in the colony depended on the people for various services. This interdependence began to be recognized and respected. As an understanding grew in the homes, a change happened in the school. 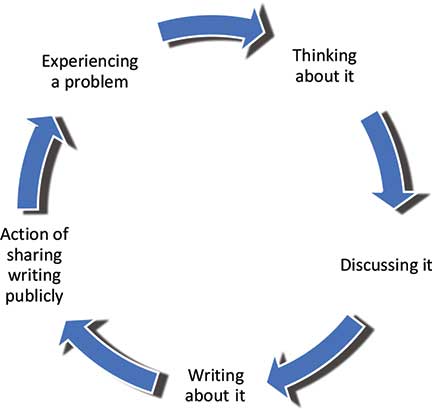 Not all the children from Class X that year were witness to this change. But they were definitely movers and change makers. For it was the first experience-thinking-discussion-action which led to a chain of events – on MENDING a WALL!

This started a cycle of actions – moving from uneasy and suspicious cohabitation (with someone different from you) to finally welcoming diversity. For it was not the physical wall that needed mending but the walls in our minds – the wall that divides people, that deprives some and privileges others! We did not discuss all the skeins of this tangled thread of life in the classroom. However, the words came through richly for the children from many sources related to life, each unravelling meaning in her own way. How long was the road that we travelled from Robert Frost’s poem!

The author has an experience of teaching English at secondary and higher secondary levels for more than 29 years. She is now a Visiting Faculty in the University Resource Centre and School of Continuing Education of Azim Premji University. She can be reached at nita_bv@yahoo.co.in or nivedita@azimpremjifoundation.org.