One of the changes we have seen in the working of the social sector over the past two decades or so has been the increased level of involvement of various stakeholders in the way interventions are planned, implemented, monitored, and evaluated. Several of the nongovernmental organizations and foundations engaged in supporting and strengthening school education now are conscious of the fact that they need to carry along – and learn from – all the actors on the stage, from government to communities to the extensive network represented by the DIETs (District Institute of Education and Training), the SRCs (State Resource Centre), to teacher trainers and teachers themselves. These apart, there are also the many long-standing NGOs that have been working in education reform for decades without much money power or political clout, such as Digantar in Rajasthan and Ekalavya in Madhya Pradesh. And of course the new crop of education resource providers such as Education Initiatives (Ahmedabad). The sustained involvement of all these groups is needed if any change is to be brought about in Indian government schools. This new commitment to a collaborative approach reflects the scope and complexity of the project of education reform. It is recognized as a long and involved process, and funding organizations cannot simply hope to achieve anything significant without getting their hands well and truly messy – for a long time! 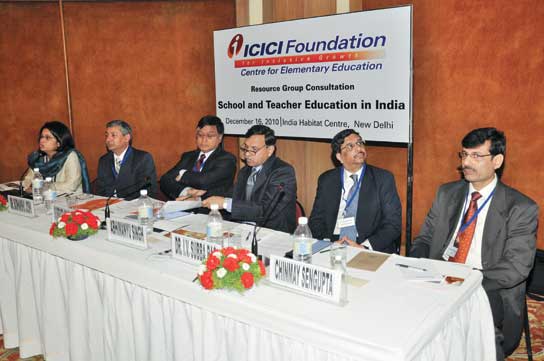 Reviewing and Re-prioritizing
In the spirit of such sustained engagement, the ICICI Foundation for Inclusive Growth and the ICICI Centre for Elementary Education recently held a consultation (November 16, New Delhi) that brought together senior bureaucrats from the Ministry of Human Resource Development, the National Council for Teacher Education and the NCERT, representatives from civil society groups, teacher educators, and multilateral funding agencies and academics. The group was charged with taking a critical look at ICEE’s initiatives in education, particularly with reference to teacher development in the states. While perspectives varied across the group in terms of the specific methods and means of empowering and equipping teachers and adding to their numbers, there was general agreement on the fact that standards need to be set, maintained, and monitored across the country. The role of universities in constructing and upgrading syllabi, and in ensuring that constituent colleges maintained standards, was stressed. Several SRC representatives bemoaned the fact that many institutes offering teacher training were no more than shells, with no infrastructure or faculty. Mr Sudhanshu Joshi, President, ICEE, summarizing this aspect of the discussion, noted the need for a broader policy which should improve, regulate and enforce the functioning of such institutes.

Another major point of discussion was the urgent need to build the bank of resource materials for teacher educators. While plenty of thought and effort has been going into making good materials available for children, teacher education has received less attention. ICEE recognizes this as a priority and has been working closely with state governments to help correct this lacuna. Teachers, particularly those who work in rural schools or in remote areas, feel not only geographically isolated but also professionally disconnected from the larger context of education. This can be corrected to some extent with better continuing education programs and other means of ongoing professional development. Talking about the need to broaden the understanding of in-service teacher training, panellists remarked upon the need for mechanisms to facilitate interaction among teachers in the form of mentorship, teacher forums. While most members of the group expressed scepticism about the role of technology in solving any of these problems, some did feel that technology could be used at least to break this teacher isolation and alienation.

It was refreshing to see that the discussion went beyond the mouthing of platitudes to some serious and constructive criticism of the system. State representatives minced no words in pointing out where government schemes and initiatives had failed, and went further, in making suggestions on how these failures could begin to be addressed. Mr Vikram Sahay of the MHRD, while accepting that there was a long way to go in teacher development, both in terms of quality and quantity, noted that the government was making serious efforts to correct their course. A new “Teacher Development Index”, to be released soon by the Ministry would provide a measure of effectiveness of initiatives, and could be used as a baseline and a continuous monitoring tool. 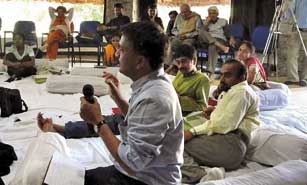 Reflection and Renewal
On quite a different note, the 11th Partners’ Forum (Bangalore, December 20 – 22) convened by Wipro Applying Thought in Schools (WATIS) featured a discussion on history, its meaning and its teaching, that ranged over two and half days. Two “expert” presentations formed the core of the meeting, around which participants debated meanings and methods of history. Participants from among the WATIS partner organizations included teachers, teacher educators, resource organizations, materials developers, writers and others involved in school education. The two invited experts were Professor Neeladri Bhattacharya, a historian from Jawaharlal Nehru University, New Delhi, and Professor Kanche Ilaiah, political scientist and Dalit scholar, from Osmania University, Hyderabad.

Beginning with an interrogation of what history means, and what its materials and methods could be, Prof Bhattacharya raised a lively debate on past and present approaches to history and their validity and perceived legitimacy, and of course the impact of these changing views on its teaching. Without completely having resolved any of these issues, the group moved into an exploration of alternative views of history, flagged off by an impassioned yet critical talk by Prof Ilaiah. Asking participants to think through questions of strategic inclusions and exclusions in history texts and teachings, Prof Ilaiah disturbed conventional understandings and provoked further thinking on such questions as how caste and religion play out in the “battleground” of the classroom. An additional perspective was provided by a practitioner”, Shankar Jagannathan, who spoke on the history of economics as a discipline – both the “doing” of it and the “making sense” of it.

Further complicating – or problematizing – our understanding of the realm of history, Subramaniam of Ekalavya focused participants’ attention on three main questions: What is the object of historical study? What is its objectivity? What is the purpose of history? Grappling with these and related questions had the participants engage in sometimes heated exchanges about objectivity and subjectivity, the dangers of relativism, and the value of fact in the face of different interpretative approaches.

Venu of Centre for Learning, Bangalore, brought the discussion back to the realm of the classroom by asking (again) three questions: What is the nature of history? How is history done? How do we teach history in the classroom?

These are after all the basic concerns of the teacher of history or the teacher of any other subject who must take a historical perspective. Issues of advantage and disadvantage, visibility and invisibility in public and communal memory, legitimation or negation of stories and mythologies… these are all issues of crucial importance, often under- emphasized in both history curricula and teaching practice. Participants shared perspectives on and experiences of teaching history, and explored the questions raised in relation to their own teaching and learning contexts.

The WATIS Partners’ meet is not, in the organizers’ own words, “outcome oriented”. It serves mainly as a space within which participants explore questions that drive their practice and share experiences. Sometimes, answers emerge from the discussions, and at other times, more questions that beg further thought and discussion. But as one participant put it, the meeting also offers the opportunity to think and talk outside the confines of a routine, besides being a place where friendships are renewed and new ones made.