Most chemistry teachers are familiar with the mole concept which is introduced to students only in the tenth class. This article makes a case for rectifying this anomaly and reviews the usual way of teaching this concept.

The mole, as every chemistry teacher knows, is a unique chemical quantity, something that is the basis for every chemical reaction. Using the mole as a unit we are able to show the rationale behind chemical reactions, deduce stoichiometry, write the so-called “chemical equation”, perform required reactions quantitatively without wasting chemicals in trial and error methods. Such an important concept has to be obviously taught quite thoroughly early in the formal study of the subject. Unfortunately, in our school curriculum we first introduce chemical equations with a certain arbitrariness after introducing elements, compounds, etc. Only much later do we introduce the mole in the form of a disjointed chapter of numerical calculations. We introduce the laws of chemical combination even later (11th grade). Therefore the chemical equation does not appear as a natural consequence of the laws of chemistry. While we teachers cannot change syllabi, we can perhaps rectify this anomaly by introducing the mole concept even during classroom demonstrations at the eighth grade level.

The classroom demonstration can then be turned into a quantitative experiment with the numerical calculations following right after it. Of course, I do not deny that we should introduce the sights and sound (the colours and the smells) first. But this can be done at earlier levels without burdening younger students with numbers.

In this article, I suggest a few well known experiments as experimental support for the mole concept. Of course that large pool of resources – the internet – has many experiments to offer. (Some links that you can access on the internet have been given at the end of this article). Here I would like to suggest only the well- known text book experiments which can be easily carried out in the average school classroom. These experiments are already well-known to chemistry teachers. My point here is to suggest the appropriateness of doing the experiments quantitatively in the 8th grade, so that the mole concept can be quietly introduced alongside. The extensive numerical can follow naturally in the 10th grade as usual.

At this stage it is also relevant to review the usual way of teaching the concept and avoid some of the pitfalls found in our text books. Here is a suggested sequence for the introduction of the various points. Chronology is important but not exclusively so. The experienced teacher knows what questions are coming from the flock! 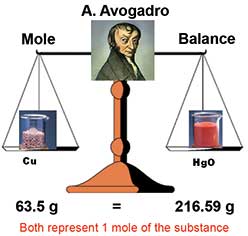 Discussing the points above mentioned will probably take two classes, after which we are ready for the experimental demonstration. Given below are the experiments.

Heating of copper (II) carbonate:
This is quite well known and comes in the ninth grade practical syllabus under “Action of heat on substances”. This can be nicely turned into a quantitative experiment. A set up shown here will serve the purpose.

Since we have to weigh certain quantities, the following precautions have to be kept in mind*

After the experiment the chemical equation can be written and calculation done in terms of moles.

A second experiment can then be performed involving the heating of copper (II) nitrate. The experiment is very similar, with the difference that NO2 produced need not be absorbed but rather shown as a brown gas. Here also 0.01 mole of Cu (II) nitrate can be taken.

After this, it can be very easily shown how, in terms of mass alone it is difficult to rationalize the fact that different masses of substances produce the same mass of CuO. By contrast it makes more sense if we look at the chemical equation in terms of moles. Later, it can be mentioned that since mass is the measured quantity, we derive the mass – mole relationship. It is also a good idea to actually show the students the masses of one mole of various substances (elements and compounds).

Since this article addresses chemistry teachers, a full detailed procedure has not been given. It must be emphasized that care must be taken at all stages of the experiment. In addition the limits of experimental errors must be mentioned.

The author is a retired teacher of chemistry. He has taught chemistry at various levels from the high school to the post graduate level. He can be reached at kaone52@gmail.com.