S Upendran
“I was the best man at the wedding. If I’m the best man, why is she marrying him?” – Jerry Seinfeld 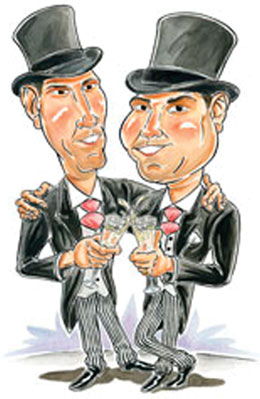 Good question Jerry. If you are the best man, why is the girl marrying your friend and not you? The groom may not have a face to launch a thousand ships, but shouldn’t the poor bloke be dubbed ‘the best man’ at least on his wedding day? Why has a groom, for several centuries now, always had the best man standing next to him at the altar? Shouldn’t the groom be the cynosure of all eyes? Instead, he chooses to share the limelight with another male on this very important day! Doesn’t really make sense, does it?

Well, it does once you get the lowdown on how weddings were performed several centuries ago. In the not so good old days, men usually married women from their own village. But sometimes it so happened that there weren’t any eligible girls around. What did they do then? Unlike parents in India, they didn’t hand over their horoscope to the priest/friends and ask them to find a suitable girl from the next village. No, the European men took matters into their own hands; they found a girl for themselves. What you have to remember is that strangers weren’t welcome in villages those days; so there was no chance of a man going to the next village on an everyday basis and wooing the woman of his choice. Romance was just out of the question. When a man wanted a woman, he had to do what a man had to do! He had to find a girl, grab her as quickly as possible and make a run for it. In other words, he had to kidnap her.

Easier said than done of course. Though movies make it look simple, kidnapping is not easy business – especially when you don’t have a car to dump your victim into. It’s difficult to grab hold of someone on your own and then force her to walk back to your village. The groom needed help to pull this off. He needed someone who was strong, who knew how to fight and whom he could trust. He needed to figure out who the ‘best man’ for this not so delicate job was! The original ‘best man’ was someone who aided his friend in kidnapping a girl; the dude was a partner in crime.

This explains a lot of things. It tells us why the best man stood behind the groom during the ceremony. It was to protect him from the girl’s parents and relatives, in case they crashed the party. Since the groom didn’t want anyone to recognise the bride before they were legally married, he covered her face. In the old days, it was merely a sack; with the passage of time, it became a sophisticated veil. The kidnapping also explains why the bride always stood to the left of the groom. In my first column in this series, I had pointed out that the left side is always associated with something negative. If this is the case, then why did the bride stand to the left? The answer once again is fairly simple; this was to ensure that the groom’s right hand was free to draw his sword in case of trouble.

Earlier, I had also raised the question as to why the wedding ring was worn on the left hand and not on the right. I had suggested it was perhaps because the couple knew that the good days were behind them. That however is not the case. For a long time, people mistakenly believed that something called the ‘vein of love’ ran directly from the ring finger on the left hand to the heart. The belief was the person whose ring you wear on this finger will remain closest to your heart.

Once the priest pronounced a couple man and wife, he tied their hands together – hence the expression to tie the knot. The Romans, on the other hand, did this tying of the knot rather differently. The bride tied lots of knots in her girdle, and when the wedding was over, it was the groom’s duty to untie them. And believe it or not, a few people used to gather around the couple to watch – not only the untying of the knots, but also the passionate act that followed. These people were witness to the consummation. Nowadays in order to get a marriage certificate, we take a couple of our friends to sign as witnesses. The original witnesses bore witness to a lot of other things!