In the May-June 2020 math special issue of Teacher Plus, we had discussed a student’s question about the presence of “oneths” in the decimal place value (Takker, 2020). We noted how probing the student’s question helped us identify its source and suggested ways of dealing with it in the classroom. Let us extend the inquiry into students’ thinking and examine how, as teachers, we can learn from them. In this article, we will discuss, how we can develop our knowticing, use it to make sense of students’ work, and decide further course of action.

A decimal ordering task
Mani is a grade 6 student. She studies in a school which caters to students from mixed socio-economic and linguistic backgrounds. Mani’s response to a decimal ordering task is selected for discussion here. This response is selected as it has been commonly found among grade 5 and 6 students. Read Mani’s response to all the parts of the question carefully and see if you can identify a pattern. You may also think about – whether you have encountered such a response among your students? What kind of thinking underlies such a response? etc.

Often, as teachers, our first reaction to an incorrect student response is to correct it. However, before we decide a course of action, let us try to understand Mani’s thinking underlying this response. Here, Mani seems to be counting the number of digits for each number by ignoring the decimal point and then comparing the numbers. In other words, 0.658 is considered greater than 5.63, because it is read as 658 which is greater than 563. Can you think of any other reason for why the student might think this way?

Let us check whether our conjecture about the student’s thinking, that is, counting the digits by ignoring the decimal point, is consistent with her response to the other parts of the question. We note that Mani considered 0.248 as greater than 0.85 (see part b) and 5.55 as greater than 55 (see part d). So, Mani’s thinking is consistent. However, there is one deviation from this response. We see that Mani has placed 3.7 as greater than 2.45. In order to understand this deviation, we asked Mani to explain it. When probed, Mani counted the number of digits for all the decimal numbers in part (a) and read 3.7 as 3.70. Does Mani’s response indicate her knowledge of the rule of ‘annexing zeroes’ to make the length of all decimal numbers the same for comparison? Interestingly, although Mani is counting the digits by ignoring the decimal point, she recognizes that 555 is greater than 5.55 and 55 is greater than 5.5 (see part d), even though both the numbers in each pair have the same number of digits. So, the recognition of the decimal point comes in when the digits are identical.

Knowticing students’ thinking
Why is Mani counting the digits of the decimal numbers to be compared? What is the source of this thinking? We know that students spend a lot of their primary schooling learning about whole numbers. When encountering new knowledge (particularly in middle school) as the set of whole numbers is extended to rationals and negative numbers, students tend to use their whole number thinking to make sense of these. For instance, students use whole number thinking when comparing fractions (consider student’s response of 1/4>1/3 because 4>3) or integers (-4>-3). In Mani’s case, we see how she uses whole number thinking for comparing decimals. We note that the student is guided by an underlying thinking of comparing decimal numbers like whole numbers by ignoring the decimal point. This strategy of ‘more the number of digits, greater the number’ works for the comparison of all whole numbers. The use of this strategy, that is, the longer decimal is larger indicates the presence of whole number thinking among students (Steinle & Stacey, 1998). The reason that it works is due to the relation between place values, that is, more number of digits means greater place values and a larger quantity.

Looking carefully, we see that using the same strategy (of counting the digits), Mani has correctly compared 3.7 and 2.45; 0.85, 0.63 and 0.4; 3.303 and 3.033, etc. (in Figure 1). So our revised conjecture is that the strategy of counting the number of digits or the thinking that the longer number is larger works for comparison of some decimal numbers but not all!

We discussed how such thinking is a result of students’ (over) generalizations from whole number thinking. Such generalizations can often get reinforced by teachers’ explanations, such as making references to whole number thinking in the teaching of specific topics. For instance, when comparing decimal numbers with varying length saying, “Add a zero and compare like whole numbers.” In other words, when asked to compare decimal numbers such as 2.86 and 3.7, we ask students to append a zero after 3.7 to make the decimal length of the two numbers the same (2.86 and 3.70), and then compare the digits at the same place value. The rule is particularly salient when comparing decimal numbers, such as 2.87 and 2.8. Similarly, when adding decimal numbers, we say, “Place the numbers one below the other, before and after the decimal point and then add the digits like whole numbers.” As teachers, we are aware of when such extensions or generalizations can be made. However, we also need to be aware of the cases when such generalizations do not work. 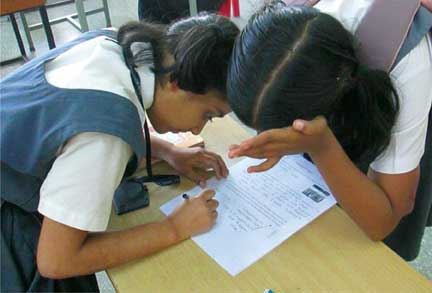 Dealing with student responses
As stated earlier, one of our spontaneous responses as teachers is to present the correct procedure to students. However, we know that correcting students by telling and re-telling the procedures does not necessarily address students’ thinking. Further, the strategy here is more complex as it can lead to correct responses. How do we as teachers deal with it in class? Or what kind of preparation do teachers need in order to deal with such explanations in the classroom?

Let us begin by identifying different cases of this problem. We know that ‘counting the number of digits’ strategy worked for the comparison of some decimal numbers but not all. Continuing with this line of thinking, how do we find the set of numbers for which the strategy works and more importantly, where it does not. Let us do a small exercise. In the table below, identify for which pairs of numbers this strategy will work and where it will not.

Designing exercises
An important task of teaching is designing problems. Teachers design problems if they find the number and variety of problems given in the textbook to be limited, or after listening to the students’ responses feel the need to press some meanings over others. Broadly, the design and sequencing of problems can be based on at least two different criteria – first, the problems must allow students to exhibit or articulate their thinking, and second the problems vary along the known variables. Do you see both these criteria being used in designing the problem sets given in the table?

A series of carefully designed problems which vary along a known criterion make an exercise (refer Watson & Mason, 2004 for details). Designing an exercise for both the sets of numbers – where the strategy of counting the digits works and where it does not, requires an awareness of students’ thinking (that is, use of this strategy) as well as recognizing different cases. While Set A includes problems where students like Mani will find confirmatory examples of their thinking, Set B challenges this strategy by providing counter-examples. Exercises including both kinds of problems (Set A and B) need to be used to diagnose and build on students’ understanding. The variables here are the length and size of the decimal number.

Consider the numbers given in Set B. The numbers in every pair have a different length, that is 1.2 has two digits and 1.13 has 3 digits. So, if the students are counting the number of digits they may think that the longer decimal is larger. In Set A, the length of the decimal numbers can be same (0.56 and 0.42) or different (1.2 and 1.23). Interestingly, if the students solve questions of the type given in Set A, we may not be certain about whether students can actually compare decimal numbers. In other words, students might compare the whole numbers and get correct answers. This means, when assessing students on decimal comparison tasks, we need to include problems of both types (given in Sets A and B).

Now, in the discussion above we seem to have missed some problem types. We have not included questions of the type where the same digits are used with the decimal point placed in different positions (refer part e in Figure 1). Can you design a problem around it? Note down all the positions where a decimal point can be placed in a three digit number. How would students’ responses vary if we used two digits – a non-zero number and a zero, and changed their positions (refer part d in Figure 1)? Such a variety of problems in an exercise will help us in diagnosing students’ thinking. After we have diagnosed students’ thinking, the next question is how do we build on it in class. 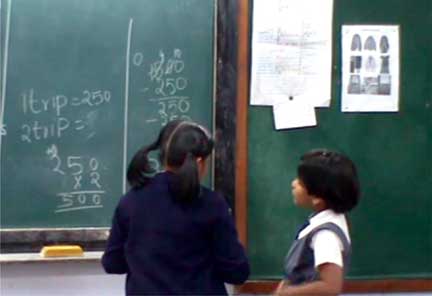 Building on students’ mathematical thinking is a process. It requires an intersection of knowledge of the content and the skill of handling it in class. Teachers’ knowticing of the mathematical potential of such student utterance helps in converting such moments into learning opportunities. First, it is important to acknowledge and explicate the student’s thinking underlying their response. Encouraging students to give reasons for their responses helps us in accessing their thinking. The reason for making this thinking available (by explicating it) to the whole class is that many other students might be thinking in this way but would not be able to articulate it. Also, posing such thinking to the whole class invites opinions from other students. They may provide explanations, reasons for agreement and disagreement. This classroom discussion informs the teacher of the different ways in which the students are thinking and plan further course of action. Second, while engaging with some confirmatory examples of students’ thinking, it is important to pose counter-instances to challenge it. For this, the teacher needs to be aware of different cases, for instance, where a strategy works and where it does not. This awareness can be developed through resources, such as reading textbooks and research literature on decimals and by listening to a variety of students’ responses. Such an awareness becomes nuanced through discussions with students and other teacher colleagues. Third, the need for a consistent explanation can be created which would work for all sets of numbers. For this, identifying key ideas in the teaching of specific topics and making connections between them might be helpful. Comparing decimal numbers using the place value of each digit is an example of such an explanation. Making the key idea of place value explicit and using it as a justification for procedures such as comparison of decimal numbers works consistently.

Concluding thoughts
As teachers, we come across several students’ responses through their written and oral work. We examine the source of students’ errors by unpacking the mathematics underlying these responses, find consistency in students’ thinking across problems, design problems to diagnose students’ thinking, and then deal with their thinking in class. This process requires as well as improves our knowticing of students’ ideas and helps us in responding to students in ways which enhance their learning. As discussed above, two important sources of enhancing teachers’ knowticing are analyzing student responses from our own classrooms and reading the research on student conceptions. These can be the content for discussion in teacher meetings or sessions in professional development programmes.

The author is pursuing her PhD in mathematics education from the Homi Bhabha Centre for Science Education, TIFR, Mumbai. Her doctoral research is on developing teachers’ knowledge of students’ mathematical thinking by supporting them in the contexts of their practice. She has developed and taught courses in pre – and in-service teacher education programmes. Prior to pursuing her PhD, she worked as an elementary school mathematics teacher. She can be reached at shikha@hbcse.tifr.res.in.