My son, Abhiram, is 10 years old. Ever since he was five, he wanted to be an entrepreneur. Over the course of time he came up with various ideas that ranged from polishing shoes, selling lemonade to being a dog breeder after seeing our dog give birth to a litter. Out of all these ideas, selling lemonade was dear to him as he knows how to make lemonade all by himself, from start to finish.

When he was five, he created flyers to sell lemonade and posted it on trees around our house in our layout. His only paying customers were his grandparents and the event ended with a feast with his friends.

Abhiram kept revisiting this idea during each of his summer holidays. My husband and I kept a look-out for any chance where he could set up a shop and have fun. Recently, I came across a one-day event happening close to our place, and after a quick consultation at home I decided to go ahead and set up a stall. 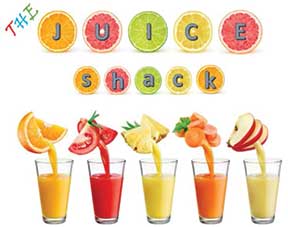 Abhiram was very excited as he eagerly pitched in his ideas and helped us shop. After procuring all the necessary ingredients, the first task was to decide on a name for the stall. This is the stage where Abhiram shone. He came up with the name “The Juice Shack”, and being artistic by nature, suggested and fine-tuned the posters his dad designed.

As parents, we felt happy to see our child involve himself in some activities that aren’t virtual. Finally, the day of the event arrived and we observed that Abhiram was actively engaged in squeezing the lemons, tracking sales, welcoming customers and asking for reviews. For a child who has a great affinity towards gadgets, the stall kept him physically and mentally occupied for the whole day. Within an hour into selling, Abhiram was able to calculate with ease the change that he should return to his customers. Each lemonade was priced at Rs.20 and buttermilk at Rs.30. By the end of the day, giving back the change for Rs.100 for 2 lemonades and 2 buttermilks seemed too easy for him! 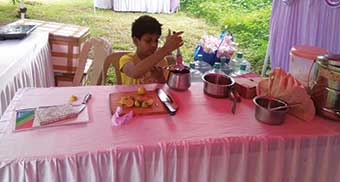 While the sale was in progress, I asked him to keep count of the number of items that we sold. He was able to decode and see the usefulness of tally marks to keep track of the lemonades that were being sold. Seeing the cash box overflowing with currency, he was exuberant and pointed out that we may make a profit. We could see that there was some calculation going on in his head. Looking at the number of glasses that we were selling he was estimating the money we made after every hour. It was dusk when we wound up the stall, low on energy but happy to have fulfilled one of our son’s dreams.

After reaching home, and taking a shower, Abhiram was ready to count the money we had made. He segregated all the 200s, 100s, 50s, 20s and 10s, patiently counted all the notes, added them and arrived at the money that we had collected. He was ecstatic that we had made a profit and started to plan setting up a chain of “The Juice Shack” stalls all over Bangalore and India! Perhaps the calculations continued in his dreams and may be dreams do come true!!

As a parent teacher, I marvelled at how children are far more amazing than we think they are! This experiment of ours taught me how to think uncomplicatedly like a child.