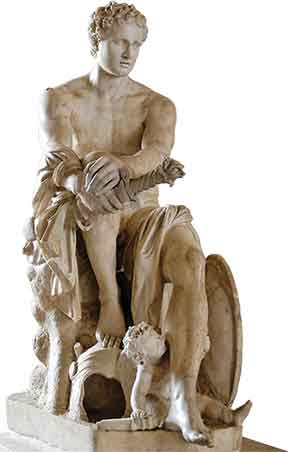 If you had lived in Rome a few thousand years ago, you would have looked forward to the month of March for it marked the beginning of a new calendar year. The Romans called the month Martius, in honour of Mars, the god of war. The Greeks, on the other hand, called the same god, ‘Ares’ – “What’s in a name?” said Shakespeare! One may wonder why the Romans chose to usher in the year by honouring a god who caused chaos and destruction wherever he went. There are two reasons for this. First of all, like many ministers today, Mars held what our government would call ‘an additional portfolio’. He wasn’t just the god of war, he was also the god of agriculture. March signalled the birth of spring; the season when farmers started doing what farmers usually do – tilling, ploughing, sowing, etc. For soldiers who had been hibernating during the cold winter months, the arrival of March marked the end of the dreary days and long nights of winter – it was now time for action. The welcome change in the weather meant that armies could easily march from one place to another. In fact, the Romans and the Greeks carried out most of their military campaigns between March and October; during the winter months, all military campaigns were put on the back burner. Perhaps the history of the world would have been very different if only Napoleon and Hitler had followed the sensible strategy of the Romans. If they had resisted the temptation to invade Russia during winter, European history, as we know it now, might read very differently.

There are several interesting myths about the god of war. If historians are to be believed, Mars was not fathered by anyone. The story goes that his mother, Hera, wife of the all mighty Zeus, became pregnant when she touched a magic herb given to her by Fauna. The child grew into a tall, handsome, self-centred individual with a mean streak in him; a trait which neither parent found endearing. He was not the apple of anyone’s eye. With his sidekick Discordia accompanying him everywhere, Mars took great pleasure in creating mayhem wherever he went. In a war, he never took sides; the only thing he was interested in was bloodshed – lots and lots of it. Despite this negative portrayal, for the Romans, Mars was a very important god; next only to Zeus. In fact, they believed they were all descendants of Mars, and called themselves ‘the sons of Mars’. Why? According to one theory, Mars fathered Romulus and Remus, the twins who founded the city of Rome. Romulus named the city he created after himself. 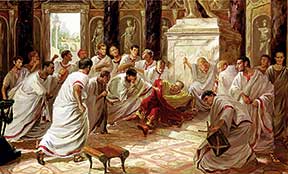 Enough about Mars and war; let us turn our attention to something less violent. Let’s move on to literature and take a look at the various expressions that contain the month of March in them. For the ardent fans of Shakespeare, the expression that will immediately leap to mind is the famous line from Julius Caesar, “beware of the ides of March”. In the play, a soothsayer – someone who claims that he has the power to see into the future-warns the emperor about the ‘ides’. Now while you and I may have rolled our eyes and scratched our head before finally asking, “Hey dude, what the hell are you talking about?”, the great Caesar understood what the man was trying to tell him. In the Roman calendar, the middle of the month was referred to as the ides; in this case, 15 March was the date the soothsayer had in mind. On this day, the Romans paid obeisance to Mars by having a military parade in his honour. The story goes that on 15 March, while he was on his way to the Theatre of Pompey, Caesar asked the soothsayer (in rather unshakespearian English) “Yo soothsayer. Looks like you got your wires crossed, man. It’s the ides today, and I’m still standing.” To which the soothsayer replied: “Yup, you still is standing. But for how long? Whatche gotta remember hombre, the ides ain’t gone yet. You know what they say Julius, it ain’t over till the fat lady sings. So you just watch that pretty little backside of yours, you hear?” But unfortunately, Caesar didn’t watch his back; Brutus and company turned him into a pincushion by stabbing him 23 times.

Some people say that Caesar was potty not have taken the soothsayer’s prediction seriously. Others believe that he had become rather arrogant, and chose to ignore the counsel of those who cared about him – including that of his wife’s. If he was crazy, one thing is for sure, he couldn’t have been as loco as the rabbit in the Lewis Carol classic, Alice in Wonderland. Remember the deliciously whacky tea party scene that features Alice, the Mad Hatter, the March Hare and the sleepy Dormouse? The novel gave life to an already existing idiom, ‘as mad as a March hare’. In real life, most people perceive the rabbit and the hare to be followers of Mahatma Gandhi – practitioners of non-violence. While this belief holds true for most of the year, come March, hares and rabbits undergo a metamorphosis. The usually docile creatures suddenly become exponents of WWF wrestling: they stand on their hind legs, thump their chests as they tear into each other and make fur fly. For you see, March is the start of the mating season for these animals and macho males go nuts trying to do two things at the same time – subduing other potential rivals, and trying to catch the eye of the females who are in season. Therefore, when someone is accused of being as mad as a March hare, he is like a rabbit in heat – not absolutely cuckoo like the animal in Carol’s novel!

Another common expression, which we Indians are not too familiar with is ‘March comes in like a lion and goes out like a lamb’. The proverb refers to the weather. In most parts of Europe, the weather during the first half of March is usually cold and unpleasant, but as the weeks progress, the temperature begins to rise and the world outside begins to bloom.

Enough of idioms and proverbs! Before I sign off, let me list some of the important events that took place in the month of March over the years. A major event occurred in the United States during this month in the year 1876 – something that we all take for granted these days. Alexander Graham Bell made the first telephone call. It was to his assistant Watson, who was sitting in a room next to Bell’s. Nowadays, of course, we say ‘hello’ when we pick up the phone. When Bell was asked what people should say when they answered the phone, his reply was ‘Ahoy’! Thank god this greeting did not catch on! Ten years later (1886), another great invention took place in March – at least present day teenagers would say that it was a great invention. The (in) famous drink, Coco Cola was invented. March was also the month the rubber band was invented. And what about Mars? Did any of the wars start in the month of March? Of course, there were! Here are some of the recent ones: George Bush’s offensive against Saddam Hussein was launched in March 2003. The current Syrian uprising began in March as well. So, it is quite possible that as you were reading this article a war or two may have started in some part of the world. Mars rules!