Young people these days are constantly “plugged in” – listening to music on their iPods or other digital devices, or on their mobile phones, tuned in either to a favourite FM station or listening to downloaded tunes on their MP3 players. Many large departmental stores and supermarkets play soft or peppy music providing an audio backdrop to the mundane activity of shopping. Restaurants have either live or recorded music playing in the background while office spaces – lobbies and even work spaces – often gently reverberate to the strains of violin or keyboards. Music is used to create and maintain mood, to fill in the emptiness of a waiting space, to quell impatience in lobbies and lifts, and sometimes, as in a gym, to build energy and support rhythmic activity. Many of us work and study with music playing in the background because it helps us concentrate and shut out the distractions of our immediate environment. Music of a certain kind helps open up minds, promotes reflection and introspection, and puts us in the mood for work. 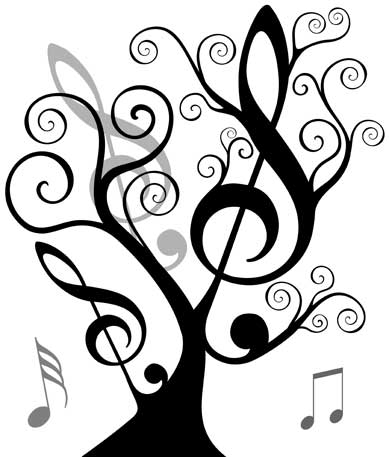 So why not use music to enhance learning spaces in schools? Why not bring music into the classroom to expand the mental space available to a child (and teacher) to explore questions and ideas that arise during the course of a lesson? We often complain about the cramped nature of our classrooms, that children are crowded into spaces that do not even allow elbow room, that the noise of the too-close outdoors and neighbouring classrooms impinge on attention and concentration levels. Music can bring in a neutralizing effect, helping to drown out other distracting noises, in a way enveloping the classroom in a cocoon of its own.

What we are talking about here is not the use of music for teaching – that is a very different thing – but the use of music as background, as an environmental influence. The benefits of using music to stimulate mental activity, or to bring about a calming ambience, have been studied by both musicologists and child development researchers. It’s part of current mythology, for instance, that playing Mozart to newborn babies can help develop a certain type of intelligence (yet to be proven conclusively, but an attractive idea nevertheless).

While it may take several years of study and observation to determine whether classical music has an impact on the wiring of our brains, it doesn’t take much to realize, at an intuitive level, that we can define our mental spaces by surrounding ourselves with music. When Sony Corporation introduced the Walkman, they did not expect that it would move music listening from a communal activity to a highly individual one, allowing people to isolate themselves from others, create their own mind-spaces, by blocking the world out with music.

A pair of headphones or earplugs helps us block the world out, but the very sound of music can do that too. How often have we sat in a crowded auditorium surrounded not only by people, but by the rich texture of music? In that communal space of the concert, we still can experience complete solitude – we can retreat to a space in our minds, where there is nothing but the self and music. Powerful music can do that. And there is another kind of music too, which not only transports us from our immediate physical context, but which makes room for thought, shepherds it into productive activity, and holds us there until we are ready to emerge.

This is not just fanciful musing. Ask that iPod addicted teenager why he has music on all the time, and he is likely to tell you that it helps him concentrate. Ask the high school girl how she completes her homework with the television on in the background, she may say that it serves as “white noise” that helps her focus on her work and keeps distracting sounds out.

Clearly, not all kinds of music are suitable for creating this ambience in a classroom or work space. In the past few decades, an entire genre has emerged, called variously, space music, or ambient music, used (as mentioned earlier) to create mood, fill waiting spaces, or set a contemplative or relaxing tone such as for meditation or therapy. Gentle instrumental music with string or wind instruments (veena, sarod, santoor, violin, or flute) is preferred over music that has heavy percussion.

Psychologists who study learning say that while most people concentrate best when there is no sound, some sound of a certain kind can actually improve the ability to concentrate. Music that is harmonious and has a repetitious structure helps create just enough arousal to stimulate the brain yet not to a level where studying becomes difficult. Some scholars say it does this by bridging the divide between the right and the left brain – the left brain engages in intellectual, reasoning activity while the right reacts to stimuli, and the presence of the right kind of music helps us focus while also engaging the right side of the brain. However, other studies have indicated that students perform better in silence than with music. The jury is still out on the question, if the number of studies on either side are an indication.

In many Indian classrooms, though, silence is not really an option – distances between children, the organization of furniture, and intrusions from neighbouring classes as well as street sounds make silence almost a luxury except in schools that are located far from the city or that have a large intervening compound. It is in such schools that music could help cloak disturbing ambient sound and offer an auditory environment that is pleasant and conducive to concentration.

Why not begin by playing music during classwork, when children are completing an exercise without too much tension, and looking at the response? Based on the reaction of children (and perhaps, of the neighbouring classrooms), you could make this a practice and then gradually introduce it during tests. Ambient music would work particularly well when children are expected to be creative, say in art or composition class, when children need to get in touch with their inner thoughts and find ways to express themselves.

Preschools and some experimental or alternative schools use music in various learning contexts, as also to help students relax at different points in the day or in the calendar, but these are in a minority. It may take some daring on the part of a teacher in upper primary school (and more certainly in high school) to suggest the introduction of ambient music in her classroom, but it might be an experiment worth trying.

Let us know if you found the ideas in this article interesting and feasible for your classroom! Write to us at [email protected] and share your reactions with us!