An outstation trip was being planned. Children were exploring the concept of distance, time-speed, direction, compass, maps, roads etc. Each child was into his own goal – one wanted to make a compass for the trip to know where to go, another one wanted to make her own map. While this was happening, another one was keenly observing through a magnifying glass. He selected a permanent observation point for himself. 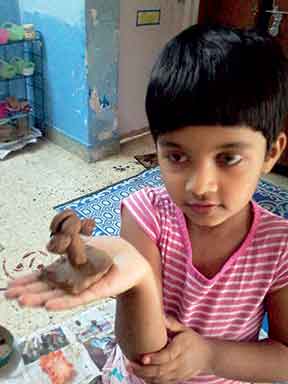 One child wanted to explore sand and after a satisfying exploration time, wanted to come into the session room. Soon, the child realised that she had to clean up before she entered the room. She tried cleaning up the sand first with her hands, then using only the dust pan, next using only the broom, then finally both. If Newton were alive, he would have been proud of the way the child almost unconsciously used so many of his laws – first to her frustration and finally to her satisfaction of doing it.
* * *
During an outdoor trip to a pharmaceutical lab, the children were taken through the process of how a tablet is made. During the Q&A session, children asked several questions on the shape of the tablet, the color, how it stays in that shape, how it reaches the right place etc.… The host then remarked to us (faculty members) that his session with the children was a test of his pharmaceutical knowledge, and that he attempted to answer all the questions that the children asked.
* * *
One week the children were exploring music. The thoughts which they expressed were, “What is music, what can be called rhythm, where do you find music, how and with what can we create music … one child experimented with her thought on‘ where do you find music’ . She put her ears to the ground, against the wall, against the partitions etc. She wanted her peers to experience the same and finally concluded that music is everywhere, even in the air. Another child shared his own observation that there is rhythm in breathing too.