A colleague and I were visiting a government primary school for girls in the state of Chhattisgarh. When the head teacher arrived, we gave our “parichay” (an introduction). My colleague and I prefer sharing only our first names. It does not satisfy the curiosity of most people I encounter in my work and it is also my intention. “How do you complete your name?” we were asked. We desisted from responding. He persisted. We relented. He seemed pleased on getting to know our last names. “It is my good fortune to have met a Brahman early in the morning,” he said. What was amusing to notice was that he did not look at me but directed this remark at my male colleague. To be a Brahman and a male is still considered a supreme privilege by many in this country. Alas! It is a privilege I missed attaining by a few inches. This head teacher was clearly oblivious to the 30 pairs of eyes and ears inside that classroom that were intently watching us. They were all girls aged between 7 and 13 years; many of them belonging to the scheduled castes and scheduled tribe. I feel I owe each of the children an individual apology for having had to witness this exchange.

Chhattisgarh is a state where ST and SC populations put together make up for around 48 per cent of the total state population. The scheduled tribes are the most underprivileged group in Indian Society (The Ministry of Tribal Affairs, Government of India). This space is not appropriate nor enough to discuss the plight of the girl children amongst that underprivileged group of schedule tribes. A child of the schedule tribe and a girl to boot! 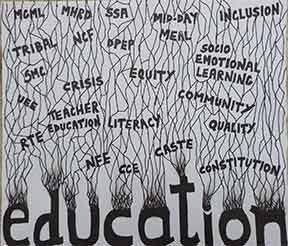 I recall the work I was engaged in a few years ago with runaway children and youth living on the streets and railway platforms across this country. Instead of being at home and in schools, they were on the streets trapped in a vicious cycle of hurt, neglect, and abuse. Along with the staff of various NGOs, I worked to create a socio-emotionally safe environment for these children in shelter homes. Indifference and apathy on the part of the school, discrimination, and sometimes cruelty meted out in schools was cited as one of the triggers for running away from home by many children. The example I recount above will not qualify as an instance of cruelty for many of us or of physical harm; it is probably more harmful because of its insidious nature.

I am trying to understand how we could make our government schools socio-emotionally safe spaces for children and what needs to be done for the same. It cannot be one prescriptive list for all schools and that might make us uncomfortable – but being able to make one prescriptive list for all schools in this diversely stratified country would be absurd too!

Within the system of education, the ultimate goal of all its components such as its various ministries, policies, acts, projects, programs, functionaries, teachers, the curriculum, pedagogical techniques, is quality education for every child. Emphasis on socio-emotional learning and creating schools that are socio-emotionally safe is another way, from the many, of looking at quality education. I am drawn towards the understanding of this space and towards processes that will aid its creation.

I am still only scratching the surface and I hope to scratch it a little more furiously, until a dent is made, with time!

The author has worked with children who live on streets, railway platforms and with the staff of NGOs who worked for their care and protection. She currently works in what she chooses to call “the labyrinth” rather than the field of education with government functionaries. She can be reached at [email protected].