It was my first day at the nursery. The previous day I had sat down and prepared for a storytelling session like a diligent student. Books that I read told me that children love illustrations. So I learnt to do easy drawings of characters in the story with the help of books like The Blackboard Book by Eleanour Watts. Despite all this I was afraid to go amidst the 20 odd 2½ year olds and tell them the story of a dog that lost its bone.

I had earlier taught children in the age group of 9-13 years. This was my first experience at a nursery though I had dealt with my own two boys.

I started my story by drawing the much practiced dog on the blackboard with each of its body parts slowly emerging. I left the tail for the last. To make it interactive I asked the children what kind of tail they wanted the dog to have. I turned to find that most of the children were sitting facing in various directions and very few were actually interested in my modern art. I was narrating the story in English. I was very disheartened and sat down in my chair. Just then a little boy came and spoke in my ear “nai”. It meant dog in Tamil. Another one came and told me “bow wow”. One of them drew a curled up tail for my creation on the board. Just then I felt that a small window had opened for me to connect with these children. I could see that I had the enjoyable task of opening more doors for the children and me.

The other experienced and trained teachers looked at me with sympathy but reassured that I would get better with each passing day. The staff room conversations that day were on my storytelling. The result of the analysis in the adult world for the children’s inattention was that they came from backgrounds where the children were first generation English language learners; very few parents spent time reading or telling bed time stories to children. But I found no solace, my restlessness increased.

I went back home and reflected on the day’s happenings. I chalked out a way to do things better. I spoke to a number of friends who have dealt with this age group. Some were die hard Montessorians, whilst some were Waldorf inspired. They all rattled the philosophies that their schools practiced. But one thing was palpable in all their conversations, the excitement of working with children.

I decided to trudge along various paths to understand the way little children learn. I found that Montessori said, “The aim of education is life itself, not preparation for life.” The role of the teacher is necessary but very discreet. The teacher is a guide and a facilitator in their learning as it is believed that children develop naturally. Waldorf believed that young children need to be directed in expressing themselves. They emphasize on rhythm, beats, and music to teach various subjects including maths. Then I came upon a number of progressive schools which stress on student centeredness with open classrooms and hopefully open minds too. Auroville believed, “Nothing can be taught, work from the near to far. Mind must be consulted in its own growth. Children learn by doing, not by being taught. The teacher has to be the role model for the children.”

When I thought I was done with most of the philosophies in pre-school education, a word “De schooling” popped up. I heard KB Jinan of Sadhana Schools say, “Learning is living and learning is part of our structure.” 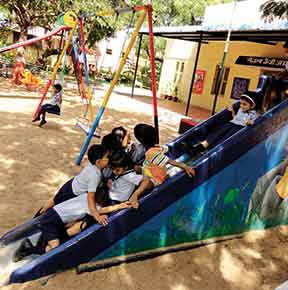 I seem to have come back to point zero in my understanding of pre-schools. I only have more questions on what constitutes learning. What is the role of the teacher in today’s world (it seems to be ever expanding!)? Do we need more philosophies?

All things stated in all these philosophies seem to keep the child and also the growth of the teacher as a person in mind. Nevertheless, I found that each child and his/her relationship with the teacher generates reams and reams of new philosophies. Giving names to philosophies and plotting the dos and the don’ts creates an invisible boundary in the minds of teachers and curbs the otherwise abundant creativity existing within the teacher and the child. Most philosophies emphasize on the teacher, child, and the school. But it is imperative that we also build integrated communities for only then will the true purpose of learning be achieved. Our everyday lives are moments of learning with plenty of live experiences and problems to be solved. Our children should be given spaces where his/her curiosity needs to be aroused to make him slowly understand the world around him/her and himself/herself. The child should be encouraged to approach subjects in various ways paving the way for a truly secular mind where it celebrates and welcomes differences in people and ideas.

The first step that I have taken is to make the school a joyous place for me, the children, and the parents as all learning is but just a game. I am sure Montessori, Steiner, Aurobindo and many other teachers who work silently and tirelessly will agree with me on this.

The author is managing a preschool in Coimbatore. She can be reached at [email protected].