Sports education in India is still quite informal, at least at the school level. Although every school has a physical education class in which children are allowed to run around and play as they please, more often than not, it’s an extended recess – there’s nothing organized about it.

There are two ways to look at sports education: the first, as a way to identify and nurture talent, and the second, a more general approach, to help build character and instill important values. Indian schools and sports coaches, more often than not, take the first approach. We choose to find potential superstars and focus on their growth, instead of trying to inspire and develop the whole.

Sport has been a big part of my life for as long as I can remember. I did gymnastics, played football, tennis, basketball, softball, baseball, learned karate, and then finally settled on cricket. While each game was enjoyable in its own way, cricket seemed the most appealing – not because it was the most popular choice, but because it involved playing with all my friends.

Having played competitive cricket for close to 15 years now, I have experienced, first hand, the life lessons one gains whilst engaging in sport. It teaches one to deal with both failure and success, and also inculcates values of discipline, dedication, responsibility, respect, resilience and hard work.

Success in sport can mean different things to different people. It is not just about winning medals or trophies, it also involves overcoming smaller barriers or limitations – ones that give just as much satisfaction. For a track and field athlete, it could be registering a personal best time or distance; for a cricketer, scoring a hundred, or executing a certain type of delivery; for a tennis player, it could be something as simple as taking the game to five sets for the first time; and for a triathlete, simply finishing a race could be enough.

All through my career, I have learnt and felt that the success of a teammate can feel just as good as a personal achievement. After all, each person’s performance on a team only contributes to the team’s cause. Sport teaches you that we all play a little part in each other’s lives, and it is important to try and leave a positive impact.

However, I have found that most children these days are taught that success is ‘being better than everyone else’. Right from school we encourage young kids to clamber for the top post – class leader, hall monitor, prefect, head boy/girl, house captain, gold medallist, etc – but rarely do we teach them to find a way to succeed together. We all chase the same crown, forgetting that we each have different strengths and are good at different things. In school, it often feels like there can only be one winner, and therefore, we come to believe that it must not be any different out in the grown-up world.

A twelve-year old girl stands in a corner in her full cricket kit as her father admonishes her for getting out.

“What did I tell you to do?”, he says, angrily waving his arms around.

“Didn’t sir tell you – ‘nothing less than 50 today’? Who asked you to play that shot? You were supposed to score more… Look at her,” he says, pointing to a nine-year-old who has just played a flawless cover drive for four.

The girls slumps over her bat and lets the words wash over her. She looks longingly at a bottle of water that is lying on the ground next to her father’s chair. He ignores her weariness and continues.

“Can’t you score more than her? How many times do I have to tell you – if you want to be the best, you have to score the most. You can’t let the other girls beat you… You can’t be distracted by your teammates. This is about you! Not them! Don’t you want to play for India? You have to be better than them… ALL of them!”

The young girl trudges off to where her team is seated, dragging her bat along the ground, promising herself that next time she will outscore them all… Every last one of them.

It is the values that you learn in school, and those that are reinforced at home, that you carry with you through life. They define you and your actions. What you learn in school stays with you forever, for the foundation of your beliefs are set when you are young. If you teach an eight-year-old that she can only be successful if she beats everyone else on her way to the top, she will believe that to be the truth.

Building a healthy culture is very important in sport and in life. A culture affects the way you see and approach things. It embodies your values, attitudes and goals towards the game and life.

I went to a school where competition was frowned upon, and we were specifically told/taught not to parade our achievements around. Every exam was preceded by a lecture about how the papers were meant to test how much we had learnt, and not to see how much more we knew as compared to the others. Despite the little bubble school kept us in, sport was a major part of our daily activity. We would play in the lunch breaks, in PE class or after school – sometimes as many as 50 people swarming on the football field, each team trying to find a way through the opposition’s seemingly impenetrable defence, and only skilful teamwork could get the ball past the five self-appointed goal-keepers!

It was by playing unorganized sport in school that I realized being part of a team forces people to work together. You learn to embrace each other’s differences, and strive to make those differences your collective strength. It is an unconscious effort, but once in a team, you understand that you cannot win on your own – you need your teammates in order to succeed.

Kumar Sangakkara, former Sri Lankan cricket captain, when speaking to a group of students recently said, “You cannot live in isolation…. You have a responsibility towards each other, to ensure that along with your own success, you make sure that someone else succeeds along with you.”

To put it simply, that’s what sport teaches you – to put the team (others) before yourself, and to ensure that everyone succeeds together. After all, in life too, we can only make a difference together. 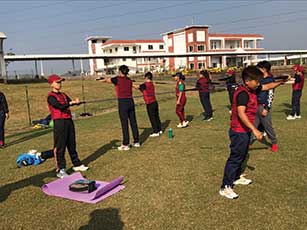 A 16-year-old stands nervously in the team huddle, listening intently as the captain hands out final instructions. After two years on the bench, she is finally getting her big break. “No one will even know,” she thinks.

As she breaks away from the huddle, the young girl feels an arm around her shoulder. “All the best! Start well! Make the wait count!”, says a senior teammate. She smiles, pats her on the head, and walks back into the dressing room.

The 16-year old jogs on to the field, hands her cap to the umpire and marks out her run up. Before running in to bowl the first ball of her professional career, she glances towards the dressing room and sees her senior – the one whom she replaced – beaming at her. The nerves disappear. She is flooded with relief. Tail up, she bounds in to unleash her first delivery and can almost feel her teammates willing her on…

Success isn’t always about reaching the top. Sometimes it is simply about doing your job as best you can. Within a team, not everyone can be a superstar. There are some players who stand out, and others who play the supporting roles. They form the engine room of a team: they do not demand attention, but provide the ‘superstars’ a solid base from which to confidently launch. Their contributions mean just as much in the overall scheme of things, even though they may not be as celebrated.

Over time, sport allows you to appreciate that it is the little things that make the biggest impacts. The making of a great athlete doesn’t happen overnight. An athlete’s achievements are not just a result of his/her efforts, but also of those around her. Each one of us has a responsibility to help people along the way – to try and make them better, and to help them reach their potential. This is not just a case with sport, but applies to every walk of life.

Success is not an objective thing; it is open to interpretation, and that is one of the most important lessons sport can ever teach you!

The author is an all-rounder who most recently played for Sikkim. She is a former India-A player and freelance journalist who covers women’s cricket. She can be reached at [email protected].