(Loyalty, obedience and fear of consequence)

“…besides,” the principal, boomed, puffing herself up to full size, “where are your loyalties?”

On an ordinary day, the students of Std. X would have smothered their giggles at the sound and light show that was on before them – but not today.

Today their fate was sealed. The principal had announced that she would not allow them to take the admission test for Std. XI at another school. They had to stay on in the school they were studying – her school – which had recently opened its doors, (also with a sound and light show) to the grand IB curriculum.

If the students were moving to different cities, that was a different matter. But if they were to stay in this city – her city – they had to be part of her school. And if they intended to apply to boarding schools, she would grant them permission to apply only to schools that she deemed fit.

Just to make sure that no one “sneaked off” to any admission test in the city in spite of her instructions, the principal kept track of when such admission tests were being held. Was it then a coincidence that the compulsory class tests were on the very days of the admission tests in other schools? Moreover, no absentee would go unsuspected – and God would not help those who helped themselves to find a better school.

Now, with all the birds in the principal’s hand, there would be none in the bush, and her new Std. XI would have most of its seats filled – and full fees paid in advance for two years.

The above scenarios sound made up – but they aren’t. Nor are the stories about principals refusing to write student recommendations if the institutions that their students choose don’t meet with their approval. It is also true that there are principals who choose to parent the parents of students in their school and prohibit tuitions, extra classes, or (and this has been a personally witnessed moment) even plays and public performances students may want to attend outside school. 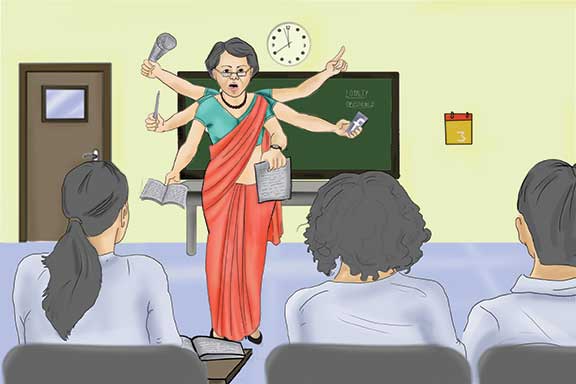 Surely all this is bullying for obedience and has nothing to do with loyalty.

In another context, a principal concerned herself with “unacceptable” photographs that her students had put up on Facebook. Were the students in school uniform? No. Was there anything to suggest that the photographs had been taken in the school premises? Just a few steps, which could be steps anywhere in the world. But, in the middle of their ICSE examination, the principal hauled in the students of Std. X en masse with their parents “because this is far more important.” The students had insulted the school and “the meaning of education.” The principal went on to show the meaning of education. She announced her intentions of checking every student on Facebook – more a threat than a reality, I hope – and everyone was to delete photographs that the principal had found “unacceptable.” In addition, the principal said, she would not welcome these students back to school should they ever return.

In the circumstances, obedience was immediate. I don’t know how many students went back to the school (or may even want to) but I do know that ICSE study time was spent with the added anxiety of deleting facebook entries before the principal snooped on them.

Parents quibble about the colour of ties and sashes in school uniforms and whether school lunches are to include a Mexican meal on one day or two. Yet, parents are terrified of taking up serious differences with school authorities.

“They will take it out on him/her,” the parents say of teachers and administrators, and students feel their marks will suffer if there is any step taken without the approval of the powers that be.

Students who stand up to authority are called “cocky,” “defiant,” and “rebellious,” and parents who question schools for test schedules being unreasonable or for extended hours of debate or sports practice are “difficult” or “interfering.”

Differences evidently suggest disloyalty and disobedience, so parents and students feel they are safer if they simply accept the line of control.

One can understand the reason for school teachers to stop rowdy hooliganism on a school camp, but what students do in their own homes, in their own time, inside family and parental orbits and outside the school is none of the principal’s or the school’s business. This is not to suggest that school authorities should not care for their students or that teachers and counsellors should neglect their students. There could always be a parent or student in exceptional circumstances of distress or confusion in genuine need of guidance and as responsible adults we are all concerned with the values, sensitivity, and respect we want students to learn.

How students learn, their grasp of subjects; the discovery, exploration and expression of their individual talents and identities; their social skills; and their physical and mental health are most definitely the concern of any school. Every teacher and principal has the scope, through simple and daily interaction, to draw upon and demand the energy and commitment of each student.

But in the need to be mentors, surrogate parents, or whatever role they would like to see themselves in, school authorities need to also understand that policing cannot be a policy in every sphere of a student’s life.

The author is an educationist and children’s writer based in Mumbai. She can be reached at bublabasu@gmail.com.