The Western Ghats are approximately 1600 km long and different parts of these mountains have different histories. Geologists have found that the Indian plate broke away from Pangea (the supercontinent) and drifted to the Indian Ocean between 167 million years ago (mya) and 50 mya, when it collided with the Asian plate. (See video of Indian plate tectonics at this website http://www.scotese.com/indianim.htm) During this period there were a number of events that led to the formation of the Western Ghats. Much like how pressure applied on the underside of a metal plate will cause a bent surface, crustal movement caused a series of uplifts resulting in the formation of the southern Western Ghats. Parts of the southern Western Ghats uplifted to the highest peaks are very old, estimated to be 2500,000,000 years old (from the Archean geological era), forming some of the oldest known rocks in the world. Interestingly, while India was part of Pangea, there were some geological faults or linear zones of weak crust, cutting across the region. These regions stayed as low-lying gaps or passes (e.g. the Palghat Gap and the Shenkottah Gap in South India), prone to faster weathering, while the adjoining areas formed massive mountains. In contrast, the northern Western Ghats were formed due to volcanic activity. As the Indian plate floated along the Indian Ocean, near the Reunion Hotspot, about 45 mya, large amounts of lava from volcanic activity resulted in the formation of the northern Western Ghats. This volcanic origin and subsequent weathering patterns caused the formation of spectacular tablelands like the Kaas plateaus (Panchagani) in the northern Western Ghats. (See popular writing on the formation of these tablelands in a blog by Suvrat Kher at http://suvratk.blogspot.in/2009/01/panchgani-tableland-informs-about.html)

All these geophysical activities have led to varied impacts on the species of plants and animals living in these areas. A number of evolutionarily old species that were found in India when it was part of the Pangean landscape are even today similar to species in Madagascar or Africa. Some evolutionarily younger species like birds and mammals, on the other hand, evolved in different parts of the world and colonized the Indian subcontinent later. The evolutionary history of our national animal, the tiger, indicates that as a species it evolved in China and colonized India. Several birds are also thought to have colonized similarly from other parts of the world. As you can imagine, this means that the answer to questions like ‘where are you from’ depends on the time frame – and evolutionary and geological time scales can provide a different perspective to the ‘normal’ human-centric view of life.

The geological origin of the Western Ghats with a series of uplifts has also had a strong socio-economic impact in this region. Tea and coffee plantations grow only in two parts of the Western Ghats formed by uplifts at different times. Tea grows in the older, higher parts of the mountains where soil has been leached of calcium and magnesium while aluminum remains relatively high. In the lower parts, which were uplifted more recently, younger calcium and magnesium rich soil supports coffee plantations. (More information in a blog post by Suvrat Kher on this research http://suvratk.blogspot.in/2009/02/why-tea-grows-at-higher-elevations-than.html) 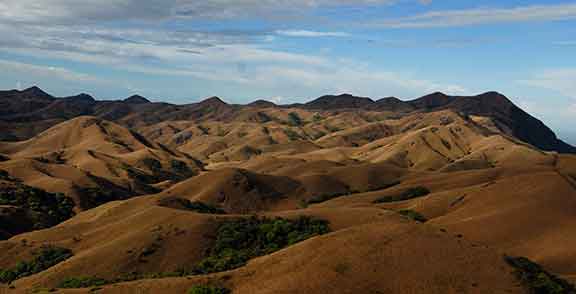 The deep geographical gaps (like Palghat and Shenkottah) in the Western Ghats, apart from allowing humans to cross between the east and west of the relatively unbroken Western Ghats, also affected several other plant and animal species. One of the impacts of the physical structure of the Western Ghats is that some species living on either side of these gaps were isolated for millions of years. Such isolation, like that famously observed by Charles Darwin on the Galapagos islands, caused new species to be formed. Research has indicated that mountain endemic birds like the White-bellied Shortwing and the Grey-breasted Laughing Thrush have had such speciation events caused by the deep gaps. As one can imagine, not all species may be affected by such gaps. Species that move less, like frogs, may be affected more by such gaps while large animals like the tigers and leopards may not be affected at all. In the Western Ghats, perhaps the Palghat Gap is the most prominent biogeographical feature, like the Wallace line in Southeast Asia, affecting even large animals like the Asian Elephant. Recent research has shown that elephant clans north and south of this gap have remained isolated for a considerable period of time.

Understanding the origin of species over evolutionary time also gives us perspective that human presence across the globe over a few thousand years has significantly altered millions of years of evolutionary history of many other species. We have changed species distribution patterns directly by bringing invasive species and indirectly by contributing to climate change. Many populations are now artificially isolated because of the forest fragments created by us, and species are not able to move through landscapes heavily modified by humans. The songs of some Western Ghat birds isolated on such human-made islands of forest fragments are now recognized to be different from each other. Bird songs are like human languages, representing cultural diversity that can also be lost by human impact. Some species found only in the grasslands of the sky islands have lost large parts of their range because of the modification of grasslands into plantation for timber (eucalyptus) or production (tea).

Sky islands, at the highest parts of a mountain range, have a cooler and wetter climatic regime than the lowlands. Some species have evolved adapting to very specific climatic conditions on these mountaintops. In the Shola ecosystem of the Western Ghats sky islands, there are specialist species in the forests (Laughing Thrush and Shortwing) as well as in the grasslands (Nilgiri Pipit). These high elevation habitats are also the most threatened by climate change due to the specific climate in these regions. As the temperature and aridity increases, the distribution of species and habitats on mountaintops decreases while species from the warmer lowlands expand upwards. Specialist species like the Shortwings, Laughing Thrushes and the Nilgiri Pipits in the sky islands can thus become extinct due climate change.

While we must endeavor to understand how different life forms interact with our physical world, we must also ponder about the ethical and moral right of our species to impact other species in such a significant manner.

High elevation habitats along mountain chains that are separated from each other are otherwise called sky islands. Unlike oceanic island systems, depending on conditions like climate and habitat the valleys in between could act as bridges or barriers for different species to move between sky islands. Sky islands are often centres of diversity and endemism for the species that inhabit them. There are nine such sky island systems identified across the world, and the Western Ghats of peninsular India is one of the most isolated sky islands systems. Many popular tourist destinations like Ooty and Kodaikanal are in the sky islands of Western Ghats. 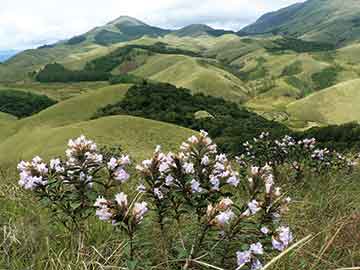 A unique mountain habitat, similar to Tropical Montane Cloud Forests in different parts of the world, occurs in the Western Ghats. This habitat is a natural matrix of forests and grasslands found in the highest reaches of the mountains. The forests are usually found in the valleys and grasslands on the slopes. This habitat forms the source of many south Indian rivers and hosts many endemic (found nowhere else in the world) plants and animals. This habitat is celebrated for the Kurinji flower that blooms only once in 12 years!

The author is an evolutionary ecologist working on the evolution and conservation of Shola birds in the Western Ghats. More details about him and his research are at www.skyisland.in.