The distinction between knowledge and information has got diffused so much that nowadays information is considered to be knowledge. We proudly proclaim that we are living in the ‘information age’ or that ‘information is knowledge’. We give information in the name of general knowledge! The myth gets perpetuated. But the two are entirely different categories. Information is time and (mostly) space specific, and hence has to be remembered and updated. Knowledge on the other hand is beyond time and space; once understood or experienced it is no longer required to be remembered, it becomes part of our being.

There is great stress these days on ‘learning by doing’. This has been taken to such an extent that the distinction between ‘learning to do’ and ‘learning to understand/know’ has also got mixed up. There are certain activities that we can only learn by doing, by repetitive actions, like reading, writing, riding a bicycle, driving a car, typing, etc. The element of understanding is minimal in such activities. Knowing and understanding fall under a different realm. In the process of knowing and understanding, doing is not as important as listening (as different from hearing), observing, remembering and recall, silence, contemplation, questioning, dialoging, experiencing are far more important. In the absence of this understanding, confusion prevails between the role of a teacher as an educator and teacher as a trainer. The stress on teacher training is indicative of this malaise. The teacher needs to understand the basic principles while the ‘how’ (a subject of training) needs to be decided based on the circumstances. This ‘how’ cannot and must not be standardized which is increasingly being done.

The distinction between truth and fact is also missing these days. Facts keep changing but truth prevails. Truth is eternal, not facts. But more often than not, the two are confused – one with the other and facts are being taken as truth. So mythologies, stories and narratives that may not be stressing on facts but may be very potent carriers of truth, are largely being ignored. The stress is on facts rather than truth. In higher education this confusion gets extended to our understanding of itihass (non linear, higher stress on truth) and history (linear, facts).

Another important distinction being ignored is between means and end. Subjects are a means to an end – to understand the objects (internal and external – nature) or to know the reality. Means are always expedient, changing with the times. That is why subjects keep changing. We introduce new subjects (e.g. genetic sciences) every few years or the scope of subjects keep changing (e.g. geography) with time. This will always be so and this is the way it should be. But the issue is that in the process we have lost sight of the object, the reality, knowledge of which is the reason for the existence of various subjects. Subjects are creation of human beings but not the reality, the principles, the objects. In the perception of most teachers (and students) knowing the subject has become dominant at the cost of losing sight of the object. This has led to fragmented perceptions instead of an integrated approach and holistic view. This has led to overspecialization and dis-empowerment of the ordinary citizen and ignoring and demeaning of local traditional knowledge systems. 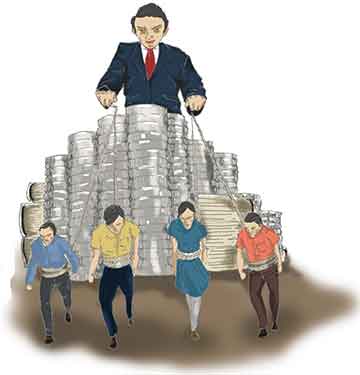 In the name of secularism we have alienated our education from the cultural roots of our society. Language has been reduced to basic means of communication only. This and the objective of turning students into ‘human resource’ to serve the market-led economy have led to the dominance of English. But the categories of Indian languages – from Tamil to Hindi/Urdu and from Assamese to Gujarati – are quite different from the categories of English and other European languages. We assume that words can be easily translated from Indian languages into English, in the process we are fast losing our categories. For instance, dharma is being translated as religion. But dharma means much more than religion. Dharma means the essence of a substance while religion is quite different and very narrow. This is only one example to show that our categories are different and we cannot mindlessly assume that languages are value neutral or culturally neutral.

These are but a few examples of how education has inadvertently undergone a drastic change over the years. We are ignoring the philosophical moorings on which any education system needs to be based. These foundations are common to all the various subjects we may teach now or in future. This acknowledgement is important which comes from an understanding of the philosophy and purpose of education.

Essentially we have moved from a paradigm of ‘value’ to a paradigm of ‘price’. Value is eternal and intrinsic – easy to understand and know. But price keeps changing from place to place and with time. It has no intrinsic value. Price is an imposed value, it is not intrinsic. This confusion between the essential, the meaning, the value, the eternal and the imposed, the temporal has played havoc with the education system and simultaneously lowered the status of the teacher. The teacher is hardly a teacher anymore. He or she is more of a trainer-facilitator.

The basic reason behind this shift is that the present education system is driven and controlled by market dominated economics. And market is no longer need based. Desire is being created and has replaced need. In present times, creativity lies in exploiting the human frailties of greed and envy to increase consumption at the cost of nature. In spite of the professed concern for environment, greed and consumption is being promoted. In spite of all the talk about individuality of the child the entire system is geared towards creating ‘human resource’ to serve this greed-based exploitative economic system.

Therefore it is in the interest of the system that the teacher (and students) remains confused between knowledge and information, between meaning and word, between value and price, between end/object and means/subject, between the eternal and temporal, between truth and facts. This confusion makes it easy to manipulate the ordinary citizen and keeps the exploitative system thriving. The average educated individual, while being exploited, becomes a great advocate of the very system that sustains this economy. Everyone is busy finding an individual identity based on externalities. Rights based approach supports this mindset. Responsibility is ignored, it is passé.

The system draws sustenance from mediocrity, standardization and universalization. Then the teacher remains a teacher only in name but in fact he or she is only doing a job to earn a livelihood. It is not a calling as in the case of a guru.

In traditional Indian society, the vocation of a guru came under ‘bhiksha-vriti’. His needs were to be met by alms. He chose the profession because of a certain calling, dedicating his life to the particular vocation out of free choice, not out of compulsions of livelihood. This is a major shift. Also if we look at the 18th/early 19th century British records, we are astonished to discover the large scale education system prevailing in the country. There are detailed records available of approximately one lakh village schools in Bengal-Bihar area (covering present Bengal, Bangladesh, Bihar, Jharkhand, part of Odisha and parts of North-East; William Adams report), 50, 000 villages under Madras Presidency (Thomas Munro) and large part of East and West Punjab and Bombay Presidency. The caste-wise data is astonishing, debunking the prevailing myth that education was only for the select few from the upper castes. But what is noteworthy is the fact that this enormous education system was entirely autonomous and not under any uniform centralized system. This should make us think afresh.

It is therefore important and crucial to keep the alternative space alive for authentic experimentation, deep questioning and exploring the relationship between the present state of education, the changing role of teacher where he/she is increasingly being made redundant and the larger system. Those in the field of education who are truly interested also need to look closely at various Indian traditional systems to find out the principles behind them without getting mired in the obvious and the manifested. As long as there are survivors there will be hope.

The author is an educator and Director-Founder of SIDH, an educational institute. He can be reached at pawansidh@gmail.com.