The use of robotics in education, in particular primary and secondary education, has seen a rapid growth over the last five years. The hands-on approach, coupled with accessible robotic kits in Innovation Hub, BITM (Birla Industrial and Technological Museum, Kolkata), has greatly aided the teaching of science, technology, engineering and mathematics (STEM) concepts within the curriculum.

The use of robots in the hub spans a wide variety of topics, a part of which is provided here:
• mathematics of gearing
• levers, pulleys and simple machines
• electronics
• sensors and actuators
• software flowcharting and artificial intelligence
• datalogging
• automated systems

The robot kits that have been widely used in the hub are from LEGO Corporation. Alternatives to these popular kits fall into two categories: expensive/modular and inexpensive/single configuration. Expensive/modular kits such as the Kondo and Bioloid kits have impressive specifications with sophisticated processors interfacing to, and in some cases, a dozen servomotors and multiple sensors. The modular nature allows the kits to be assembled in a variety of configurations to explore a wide range of educational concepts. Typical budgetary constraints limit the use of these kits. 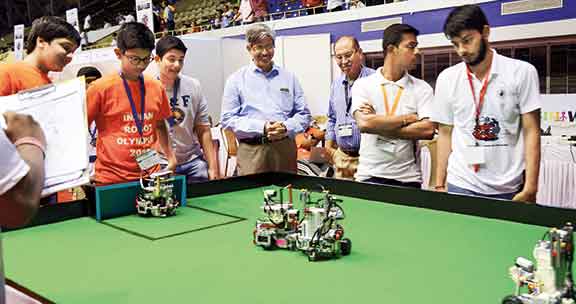 Inexpensive/single configuration robots prove far more popular in the cost-sensitive education market but typically have only one predominant configuration. Although, there is no doubt that there are significant educational outcomes possible, the lack of physical modularity tends to restrict the type of activities possible. The Create Roomba from iRobot and BoeBot are two such examples. Although all educational robotics kits serve a particular section of the curriculum, the LEGO Mindstorm system is arguably the most commonly used. It has the easiest learning curve of all systems, hiding away complex circuits and electronics, to allow students to concentrate on mechanical building and high-level software programming. The modular nature allows it to be reconfigured into an almost unlimited number of different configurations.

The current LEGO Mindstorms system provides a central processing unit capable of three outputs and four inputs. Geared DC servomotors with encoders, along with touch, sound, light and ultrasonic sensors are provided as standard with the base kit. Additional outputs and inputs are available for third-party vendors such as servomotor controllers and a variety of sensors (pH, accelerometer, dynamometers, colour, etc.). There are several software languages that can communicate with the Mindstorms system, and LEGO encourages people to develop their own. However, the official software is built on LabView and incorporates a graphical user interface. This approach makes it intuitive to students and can be used for students of eight years and younger also. 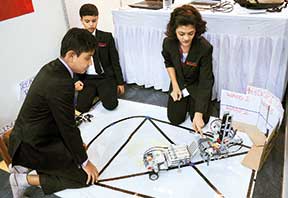 Embedded within the curriculum: Robotics provides the opportunity to learn a wide variety of STEM concepts (see above) that are required by curricula around the world. By using the robot as a tool in a specific lesson plan, educators are able to actively engage and motivate their students, giving tangible and observable representations of the concepts they are teaching. For example, the concept of pi becomes far more relevant to students when they are required to move their robot a certain distance. 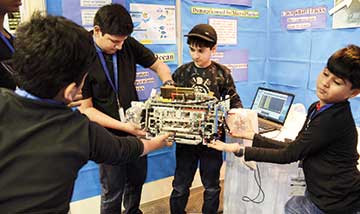 Extracurricular activity: In addition to its direct use in the curriculum, robotics has also found its place as an extracurricular activity in lunchtime or after-school clubs. These tend to be less explicitly focused on the curriculum and more focused on the creation of a final product, be it for a competition or for a display and demonstration to the student’s immediate community.

The First LEGO League (FLL) and World Robot Olympiad (WRO) are two significant education competitions that focus on robotics. The FLL and WRO both restrict competitors to the LEGO robotics products and set an annually changing series of challenges for the students to solve. Each year, a socially relevant theme is used, and in addition to the robot part of the competition, students are encouraged to undertake a research project in that particular field. These challenges do not change significantly from year to year, and students are being motivated to improve their robots.

Despite the significant increase in robotics awareness in Kolkata in the past few years, there is a lot of scope for betterment of the situation. There is no dearth of interest among the school students and certainly no lack of skills. But the non-inclusion of robotics in the school curriculum often poses a hindrance to the students’ zeal for learning. Innovation Hub, BITM, for the last four years, has been trying to inculcate the passion for robotics in students by providing them training in this regard throughout the year. Also the hub is trying to sensitize the school authority about robotics in the school curriculum. In 2016, World Robot Olympiad (WRO) India National, held in Kolkata generated the much required awareness among students interested in robotics.

The author is a curator in Birla Industrial and Technological Museum, Kolkata. He has developed multiple methods of scientific learning based on the STEM principle which provide students a joyous, fruitful and effective learning experience. He can be reached at sudipto.juetce@gmail.com.