Nature is one of mankind’s greatest teachers. Most of our scientific discoveries are inspired by studying nature in its myriad forms. We learnt ‘how to fly’ from birds, ‘how to swim’ from fish and ‘how to smile’ from apes! The sad reality of today’s education system is that we keep the children far from nature and try in vain to enrich their minds merely through print and pencil.

Learning in today’s world is synonymous with classroom education. A brick and mortar school building with no connect with the outside world cannot be the best setting for creating impressions on young minds. The old and established schools at least have something of a campus. The schools that mushroom in congested corners of our cities today are just concrete boxes. Far from being a vivid and vibrant exercise, the process of learning has been reduced to a mundane chore. With teachers bustling in and out at the stroke of every hour, the kids have to switch their minds instantaneously from mathematics to science to languages at the strike of each gong!

Biology – A chance encounter I had with a rowdy little nine year old at a horticulture show recently comes to mind. He was ahead of me in the ticket queue to enter the exhibition grounds. Throughout the duration of waiting in the queue his mother kept cajoling him that he was surely going to enjoy the show. As opposed to the virtual gaming parlour which he thought would be a much better investment of time. She tried her best, filling his mind with verbal pictures of pumpkin creepers and chilli shrubs. But the fellow could only imagine his dreary biology textbook or sliced, packed veggies in his refrigerator. We got separated for a while and I got to see them again a good hour or so later. The wonder and awe with which he was looking at each plant struck me with great force. There was a reverence in his approach as he moved from brinjal to tomato to turnip. He asked the exhibition curator the most intriguing questions and was eventually rewarded with a rose sapling for being the most interested visitor! I bet biology will not remain a distant and drab subject for him anymore. 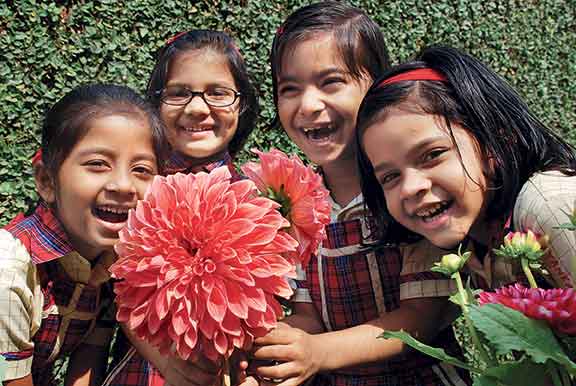 Literature – One of my close buddies is a high school English teacher. She once recalled a poetry lesson gone comically wrong in her school. She was trying to inspire her students with poignant lines from “The Road Not Taken” by Robert Frost. When she posed the choice to her students about which road they would choose, their response was totally matter of fact. Obviously the road less travelled because that seems to be a short cut with less vehicular traffic on it! Little wonder then that literature and poetry are no longer subjects of choice among our students for advanced education. They are unable to weave images of a world sans the harsh urban realities, and thus prefer to live in the prosaic world.

Sex education – Another tricky subject to teach children is sex education. Mothers flounder with inadequate words and embarrassing descriptions while on the topic. Teachers find it highly unsuitable for classroom teaching since it’s a sensitive subject, best imparted one on one. But I have observed a remarkable trait in children who grow up on farms or have pets at home. They are at ease with the idea of procreation, pregnancy and delivery. Having seen these occurrences among animals, they are able to relate to these elemental facts of life. It is the urban children who are cloistered from life’s realities that are ignorant and unprepared for this critical life lesson.

While on the subject of learning from nature, I am going to let you in on one of the hottest research areas in the tech world. The latest endeavour is to capture the internal workings of the human brain and teach computers a thing or two about how humans learn. If you have heard the words ‘Neural Networks’, ‘Artificial Intelligence’ or ‘Machine Learning’ you know what I am getting at. The tech moghuls have decided that computers cannot learn anything effectively if they are just fed thousands of rules and asked to follow them. It was turning out to be as futile as asking a kid to mug up Wren and Martin in order to speak fluent English. So the new approach to making computers intelligent is going the human way. Learn by exposure to the situation at hand. Then improve by trial and error. And finally become perfect by practice. So now a computer learns how to identify a cat by looking at thousands of cat images!

After dwelling on several flights of fanciful ideas, I am now going to list a set of concrete steps to rectify this void in education:

Even computers have realized the folly of learning merely from stacks of rules and blocks of instructions. When are we going to free our children from this sterile learning environment and give them the joy of involved learning?