As soon as she entered the gate, she felt at home. This was the feeling she had savoured and relished. Bustle without chaos: the noise of young people letting themselves go as they connected with their friends and then quickly pulling themselves up as they caught sight of a teacher. The sheer vibrancy of it all was what held her in thrall.

‘How I will miss it!’ Priya thought. ‘And how I wish I could experience another five or ten years of this.’

Priya knew it would end soon. Already, she had crossed the retirement age but she was staying on for another couple of months to complete the academic year with the students.

If she could have another few batches of students, it would give her a new lease of life. ‘Imagine what fun it would be!’ she contemplated with a faint smile playing over her lips. She glanced at the groups of students she passed on her way to the staff room. ‘I probably wouldn’t even notice them when they’re in junior school, then I’d start to pay attention to what the middle school teachers have to say about them as their personalities took shape, and finally I’d have them under my eagle eyes in high school.’

As English teacher for Grade 10, Priya had always made it her business to learn names quickly – and then match names with faces. At the beginning of each academic year, she gave herself a target of six names a day – and thus, in a couple of weeks, she had them all memorized and none of the kids could get away with, ‘No, Ma’am, you didn’t tell me, you must have told one of the other boys/girls…’ 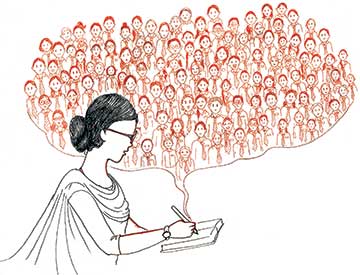 Priya also did something else she knew her colleagues didn’t. She kept a meticulous record of each child who went through her class. She had not started this until she met the first batch of ex-students after they had been through the 11th and 12th and had joined college. They were already two or three years out from her class – and she only remembered the really naughty or the really good students from among the rest.

‘I just pretend I remember them all,’ Naina, the senior Maths teacher at that time, had said. ‘But it is really tough. I’m already stressed with the current lot I’m training up for the board exams. How am I to go back in time and recall what or who drove me crazy years ago? So, when one of them says, “Ma’am, remember when you punished me for not doing my homework?” I know it must have been a big deal in that kid’s life, but for me it was something routine, something I’ve done so often I can’t for the life of me recollect what was so special about that instance. So I come up with a noncommittal kind of answer…’

‘Like, “I hope you didn’t make other teachers do the same thing in the 11th and 12th …” or “I hope it taught you not to take work lightly…” or something on those lines?’ Priya had asked.
‘Exactly!’ Naina had laughed and clapped young Priya on her shoulder. ‘I can see that you’ll get used to it pretty soon and come up with plenty of stock phrases…’
Some of the others in the staff room had grunted in agreement.
‘But it seems so unfair to the bulk of the class to just forget them…’ Priya had murmured.
‘Come on, Priya, be realistic,’ another of the senior teachers had said. ‘It’s not possible to commit so much to memory about kids who are in your class for just one short and hectic year – especially since they change so much when they return as adults!’
‘Why not?’ Priya had wondered, but she had remained silent. She was still too new to this aspect of the teaching profession to argue with those with so much experience.

But she had looked down at her feet, thinking, ‘Oh, I never, never, never want to come up with stock phrases. I WANT to remember.’ And that week she came up with the idea of keeping a record of each class for herself and she had started a ‘Lest I Forget’ diary.

It was actually a kind of excel sheet in the days before excel sheets and it was done entirely by hand, with paper and pen. At the beginning of the year, as she got to know the children’s names, she wrote them down along with a little description of the child. Later, after the first PTM, she put in a bit about the guardians and the family. And through the year, she filled in momentous events in relation to each child and her reactions to them and finally, when the class photograph was taken, she labeled it carefully and stuck it in.

It was all in code of course: Thus MOA and FC didn’t refer to the extinct bird or a football club. It meant ‘Mother over-anxious, Father cool’. SiP was ‘sibling pressure’, SF was sports fan, and so on.

She made other comments too – like what she thought the child would be best suited to in later life. Of course, she kept those observations to herself. After all, she was not a psychologist or career counsellor. But it was fun to check how far wrong she had been or if she had been right when she met the students years later …

The diary had served her well over the next 30 years as she kept track of not just the students and ex-students and their careers, but in some cases their children too. A couple of summers ago, she had managed to put all this information on her smart phone. She was therefore always prepared for occasions like this, when the ex-students had a full day at their alma mater.

‘You know who’s here!’ said Ruby, the Physics teacher, as she sat down in the staff room. ‘That little horror Vicky.’
‘You mean Vicky the Wicked?’ asked Dipti, the English teacher for Class 11 and 12.
‘None other.’
‘He hasn’t been to school since he left,’ said Dipti.
‘Under a cloud,’ added Ruby. ‘I think he knew that none of us would want to see him again.’
‘Why is he here now?’ asked Dipti.
‘He’s enrolled his son here – and he wants to show him around and introduce him to the teachers.’
‘His son must be in kindergarten or something,’ said Dipti. ‘Vicky finished school just a few years ago.’
‘More than a few years,’ said Ruby. ‘It’s just that we took some time to get over him. None of us could believe we could have a student like that in a school like ours. We were so worried about the reputation of the institution, remember, what with those reports in the newspapers and all…’

Ruby continued. ‘His son is in Grade 5. He’s just come in from some other city. Apparently, our Vicky the Wicked got married young. Or maybe not so young. He dropped a couple of years, if I remember right…’
‘And now we have to suffer his son!’ groaned Dipti. She started counting on her fingers. ‘Let’s see. If he’s in Grade 5 now that means he’ll take six or seven years to come to me…’
‘…or more, if he’s like his father…’ said someone from the far end of the room.
‘You’re lucky, Priya,’ said Ruby. ‘You won’t be here to face any problems that come up…’

Priya didn’t say a word. She didn’t need to open her phone and search through her memory sheet because she remembered Vicky well. She also remembered his father, who had created quite a shindig when Vicky was accused of painting all those slogans in the girls’ changing rooms. ‘Show me the proof! Is there a CCTV recording? You can’t have that, can you? So how can you blame my son?’ he had roared, despite Vicky piping up every now and then and saying, ‘It was only a game…’ 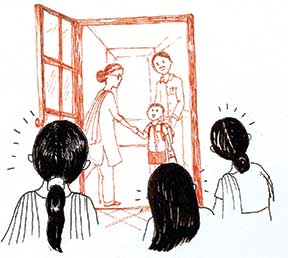 Priya had always felt there had been others involved, but he had not ratted on them. It had been made to appear like an offence that deserved jail time – rather than a schoolboy prank. The implication was always that Vicky had been a peeping Tom. He had hidden in the girls’ dressing rooms…Who knew what else he had done, they said. He was even suspected of leaking those question papers that year. He was the only one who would have done such a thing, they felt…After all, if he could slip into dressing rooms unseen, why not staff rooms, office rooms, and other places? And what about that money that went missing … and those jackets that were stolen?

‘He’s a businessman now and he’s returned to take over his father’s factory,’ said Ruby. ‘So he’s going to be one of the big shots who’ll be in our face all the time…’

The doorway darkened and Ruby looked up to see who was there. She should have known. It could be none other than Vicky. Only he would seek out the teachers rather than wait for them to make an appearance at the venue – in this case, the sports field.

Ruby, Dipti and Priya and a couple of other teachers who had known Vicky rose and went to the door. ‘You look the same,’ said Vicky to the teachers. ‘Do you remember me? Vicky Rana?’
‘You’ve filled out,’ said Ruby.
‘You’ve got grey in your hair,’ added Dipti. ‘But we do remember you…’ She gave him a meaningful look.

Vicky flushed a bit. ‘I’ve brought my son, Adhiraj,’ he said quickly, turning to Priya who had not said anything yet. ‘He’s joining Grade 5 this year so he’ll be with you in a few years…’

‘I’m retiring this year so I won’t meet him when he comes to Grade 10,’ said Priya. She held out her hand to the little boy. ‘But you’ll do fine, Adhiraj. Your Dad was a really creative person and I’m sure you will be too.’

The teachers and even Vicky stared at Priya open-mouthed. ‘Creative?’ said Vicky. A smile slowly spread across his face. ‘You mean I created a lot of trouble, don’t you, Priya Ma’am? You counseled me so often…’

‘You did?’ asked Ruby and Dipti, turning on Priya. They had never heard her mention it.

Priya shook her head. ‘I don’t remember that,’ she said. ‘But I do remember that you were always full of ideas…and ready to take up challenges.’ She turned to Adhiraj once more. ‘You’re lucky to have such an interesting father,’ she said, patting his cheek and then taking his hand. ‘Come on, let’s look around the school…’

Vicky had no choice but to follow her. His cell phone pinged and he took it out and looked at it, then, with an apologetic gesture to Priya, he moved aside and made a call.

Priya was glad that he was talking on the phone and Adhiraj was straining his ears to hear the scores of the game that was going on in the field. She was relieved that she was the only one who caught Dipti’s comment, ‘Thank goodness there is a retirement age for teachers. Priya’s lost it! How can she not remember all the things Vicky did – or that she counseled him, as he claims?’

Priya suppressed a smile. Sometimes, it was better not to remember, wasn’t it?

Cheryl Rao writes for children and adults. Her books have been published by Cambridge University Press, CBT, NBT, OBS, Mango, Pratham, Tulika, Rupa & Co, etc. She can be reached at [email protected].