Bollywood churns up films on sports at regular intervals. Some films like Mary Kom, M.S Dhoni, Bhaag Milkha Bhaag are biopics, some are dramatized versions of newspaper reports while some project a hypothetical situation to make a point about bias and discrimination plaguing the sporting fraternity and by extrapolation, plaguing the country. The thrill and nail biting finish in these films ensure their popularity with the audience. Some of these films become top grossers of the year. People love watching these films again and again. Each one of these films has some valuable lesson to offer – lessons to hone the sporting skills and lessons in lifeskills.

In this write-up, we shall take up two films – Lagaan and Chak De India and examine the dynamics of team building as projected in these two films. In Lagaan, Bhuvan had to create a team from scratch. He had to identify cricketing talent among the male villagers of Champaner and hand-pick every single player who formed the raw material of his team. In Chak De, the raw material was given to Kabir Khan. He had to create a championship team with 16 players from different states. These individual players were strangers to each other. Each one of them was a bundle of ego and prejudice.

In both the films, the teams were a showcase of the diversity of India. Lagaan is read as a film on nation-building. The team put together by Bhuvan had a Muslim, a Sikh, an untouchable and a cripple. When the entire village was against taking an untouchable in the team, Bhuvan did not waver from his decision. He had identified a rare ability in the untouchable and he was focused on putting this ability to good use. But a woman was conspicuously absent from this eclectic team. Her role was confined to that of a catalyst and a supporting role. The rag tag team in Lagaan had to win just one game and that game was crucial for ensuring the survival of the entire village.

The absence of a woman in centre stage is made up in the all women’s hockey team of Chak De. The bickering team members drowned their individual differences and won a series of games to become champions. Initially, being a part of the Indian Hockey team had meant a secure government job, a pension after retirement and a foreign trip. They did not expect to emerge as champions and nobody expected them to come home with the gold medal. But their coach Kabir Khan gave them a higher goal in life and pushed them towards achieving this goal.

In both the films the underdogs emerge as winners. We shall examine how the impossible was achieved through well orchestrated team work.

This nugget of wisdom is fundamental to any team effort – be it a game of hockey or cricket or an event management project or performance of a 90-piece orchestra. All team members have to be focused on the common goal, leaving little room for free will. If individual rivalries or old enemities surface during a team’s performance, then the results are likely to be something like the first game Team India played with the defending champions Australia. Australia scored a goal in the very first minute of the game. Team India, instead of pulling up their socks, displayed total lack of co-ordination. Full-back Balbir got into an argument with the umpire and was thrown out of the field, substitute player Soimoi could not follow the instructions and the senior-most player Bindiya Nayak refused to help her out; centre forward and right in would not pass the ball to each other and played their own little game of one up (wo)manship. The result was a crushing defeat of 7 goals to nil.

In preparation for the next match, Kabir withdrew the rotten apple – the senior-most player Bindiya Nayak – from the team and created a formula for defense that the players could follow in the field if they had to save the game. The precise instructions from the coach paid off and Team India won 1 – 0 against England. Coach Kabir Khan congratulated and shook hands with every player in the team, except centre forward Preeti Sabharwal, the player who had actually scored the goal. Kabir had noticed that Preeti was not passing the ball to right in Komal Chautala. This was against the team spirit.

Team India sailed through the remaining matches and reached the finals. On the night before the finals, Kabir called Preeti and Komal out in the field and warned them that this rivalry between right in and centre forward would be the ruin of the team because the Australian team was sure to notice this friction and turn it to their advantage. Preeti confided in Komal that she had nothing against Komal but she had her own agenda to fulfill – that of being the highest scorer in the tournament. At a critical moment in the final game with Australia, Komal made sure to pass the ball to Preeti so that she could score the goal that saved Team India from defeat. This was a demonstration of the highest form of team spirit.

Often demonstrations of such team spirit, of individual sacrifice, go unapplauded and unnoticed. In a team work, the individual team member’s contributions are often not highlighted, but that should not deter the team members from putting in their best. “Achievement of the team over individual brownie point” is the mantra for any team’s success.

The victory and the overall experience of participating in the tournament under the guidance of Kabir Khan, transformed all the players. Balbir Kaur tempered her temper and Bindiya Nayak, the senior-most player of the team realized that she was not invincible, but she was indisposable. Preeti Sabharwal earned the confidence of carrying on in life without basking in the reflected glory of her “star” fiance. 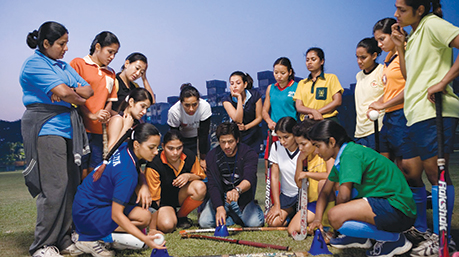 In Lagaan, a nation was born with victory in the game of cricket – a nation that could win a David and Goliath battle against an invincible adversary; a nation that could identify and optimize its indigenous resources, that could adapt a foreign cultural element like a game of cricket and indigenize it to suit its conditions. In Lagaan so much of the game of cricket that Bhuvan’s team played was uniquely Indian. They played barefoot in dhoti, they chiselled their own bats from indigenous wood and they invented a style of bowling that was passed by the umpire because in the rule book of the game there was nothing against it. On the evening before the final day of the match, the entire village prayed to God for victory. The next day, the game of glorious uncertainties that cricket is, God smiled on the villagers and gifted them no balls and missed catches. A victory was clinched in the last ball of the last over. Of course, the team leader Bhuvan played the winning stroke, but more importantly, he held the team together and did not chide anybody for their failing. Even when a spy was identified in the team, Bhuvan decided to give him a second chance and an opportunity to atone for his misdeeds.

From learning to swing the bat and spin the ball, Bhuvan’s Team India learnt to negotiate every unforeseen situation of the real game. When they were injured and fell to the rough bowling of the English team, they made sure to save their wickets even as they fell and cringed with pain.

A film like Lagaan is an excellent resource material for teaching team building and leadership management. Bhuvan displays true leadership skills – from taking a bold decision to identifying talent and nurturing it; from keeping cool in an hour of crisis to carrying the load of the entire village on his shoulders.

A film like Chak De India is excellent material for rekindling interest in the national game. This film is like a textbook for any aspiring coach. The film can also be used to initiate a debate on gender issues, minority issues, patriotism and the problems plaguing our sporting associations.

The question is, if the sporting arena is so effective in character building, why are retired sportspersons not inducted into the task of serious nation building? Why do only advertising agencies use sportspersons for brand endorsements? A good sportsperson is worth much more. He/she is not only physically fit, he is also hard working, uncompromising, a good strategist, a good crisis manager, a good stress manager and much more. It is an appeal to all sportsmen and women to use their star power for nation building instead of turning a country into a nation of consumers.

The author is founder secretary of Bichitra Pathshala. She practices and promotes ‘learning with moving images’. She may be reached at [email protected].