As I was driving in the city, I chanced to see a school advertisement, where a horse carrying a warrior was jumping out of the blackboard and the tag line referred to the effect of how history lessons are brought alive through technology in the classroom! It set me thinking about how history as a subject is taught in Waldorf schools, where subjects (and especially history) are brought to life.

Many around me who are technologically or scientifically inclined wonder at my son’s fondness for history! “What use could this subject be of when the world is advancing at such a fast pace?” I am frequently asked. For me, as a parent of a child studying in a Waldorf school, where every subject is important, it has been a learning process to discover what an important role history lessons play in shaping my child’s character and skills.

Like any other school, Waldorf schools have the usual history syllabus,, but the difference is that alongside learning about events and chronology, the whole class reflects the age and times that they are studying about – through art, theatre, and writing, among other things.

History lessons are like stories that are bound to have rapt listeners (provided, the teacher is well -organized). They stoke the imagination and sets the mind thinking on what could have been, how things might have been… and from these simple ideas many interesting questions arise.

How trivial issues when not handled properly at the appropriate time could lead to a war between nations.
How human temperaments can change the course of future generations.
How weakness and short sightedness can create chaos and long-term problems.
What led Alexander to set out on an expedition to conquer the world?
What enabled Magellan to go on an expedition of circumnavigating the world?
Why did Michelangelo want to dissect human bodies?
What was the role of honesty in art?
How did technology aid art?

History helps students gain a holistic view of the world; they learn the importance of technology as well as art; they learn to respect both objectivity and passion. They learn from successes and failures and have the opportunity to judge the consequences of a whole variety of actions. History is relevant because it encompasses the stories of our world; stories that we need to know to avoid mistakes, to instill great qualities, to shun pettiness and maliciousness and to carry on with good spirit.

I have watched my son who earlier considered drawing a chore, spend hours copying “The creation of Adam” as perfectly as possible. This new found respect for art was clearly due to the History lesson on the European Renaissance and Michelangelo. And what delighted me most was his response to the recent Telengana agitation, when statues on Tank Bund were destroyed by protestors. This to me is relevant education. Learning from the past to apply in the present and future.

The author is a Remedial Therapist and Kindergarten Consultant and also runs Ananda, a Foundation for healthy and holistic learning and living. She can be reached at [email protected].

The perils of the sea

This is how Vishwambhar Anand Vaidyam, a class seven student in Abhaya Waldorf school chose to answer the following question –
What are the perils that you would face if you went on a sea expedition in the olden times?
(The class had done a lesson on Ferdinand Magellan and his expedition of circumnavigating the world.) 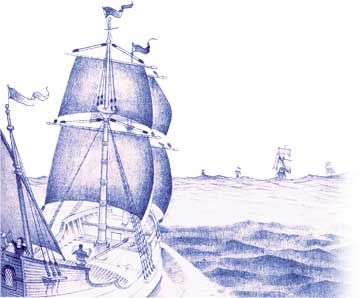 I walked into a pub where I knew I would get the answers to my questions. I sat next to an old “sea-dog” who claimed to have gone around the world with Ferdinand Magellan himself. I told him, “I am planning to go on an expedition to create a trade route with the South – Americans. I have never been to sea before and I want to know the dangers I might face.”

He replied, “I am an old man. I cannot remember. I … “and he began an unconvincing fit of cough…

I was expecting this. So I ordered the sailor a pint of rum. The sailor winked at me. He cleared his throat and began, “The most dangerous perils were the storms. They tore our sails, pushed our ships and made them crash against the shore and worse, swept our barrels of whisky overboard!” so saying, he took a long gulp of his drink.

“Then there were the mutineers who tried to get rid of Captain Magellan himself. But Magellan was clever… aye, very clever. He got rid of the cut throats and continued his journey…” The old sailor now stopped and said, “I don’t seem to remember anymore…”

I noticed that his glass was empty and ordered another drink. He took a sip and smiled mischievously and continued …

“Sometimes we ran low on provisions and had no place to get more. We got sicknesses such as scurvy. All around us was miles and miles of water. Out of hundreds of sailors that set sail, just seventeen of us returned. You can imagine what an ordeal it must have been. The sea is not for the weak at heart… nay…

Even when we reached a shore, either there was no edible vegetation or the natives were very unfriendly.

Then there were pirates who wanted to steal our money but … aha us… we had the men and the guns to overpower them.

We also had to face physical problems… the likes of rocks and reefs, icebergs and giants seals and oh, the whirlpools.

Sometimes a sailor drank a drop too much and went around puking on the deck! Ugh!”

I laughed listening to the last danger. I thanked the sailor and bade him farewell. I was now enlightened and set sail on a fruitful journey.

More than a story

Shiva, Class VII
In my school we started learning history as a subject from the third class. But I already had a bit of knowledge about history. I used to read the history of India from a Telugu monthly magazine called Chandamama.

I once thought that history was a long story and its importance did not go beyond that of entertainment. I began to recognize the importance of history only when our first history teacher answered my question to why history was important. I have modified this answer in many ways until I was satisfied. We depend on history for knowledge, to learn moral values from various stories and lastly to realize that we have come a long way from the past and to learn from our ancestors and to face difficulties as bravely as some did. I personally like history mainly because it is filled with real stories and lot of it still lies shrouded in mystery. To learn about this mysterious and wonderful story, historians and archaeologists uncover evidence which is preserved by the earth. History should not be taught as a subject which has to be learned by heart as it is not like the sciences which are full of theories and laws. I hope that all the pages of this torn book will be pasted together and we shall gain full knowledge of our ancestors which time hides from us.

Dear subscribers/readers
Please note that you will not receive any issue in the month of May 2021. The next issue of Teacher Plus is a special double issue focussing on Home Economics. The issue will reach you in June 2021.