No society, whether big or small, can function without rules of some sort. These rules can be written or oral, spoken or unspoken. But on what are rules based? Sometimes they are based on the whim of a dictator, but more often a society has developed what we like to call ‘core values’ from which the rules derive.

Let’s first look at the terms ‘rules’ and ‘values’, to be clear about what we mean by them.

Values
What we loosely term ‘values’ can be thought of as the attitudes and behaviour that a particular group of people has deemed to be desirable to promote harmonious living within the community. That community could be a nation, a tribe, or an ethnic group; but also a family, a school, or a workplace. 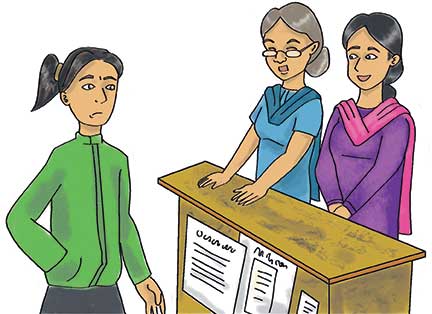 It is interesting to note that most cultures have similar core values, with minor variations. However, we must be careful not to be too indiscriminate. All positive values – with one exception – are in most situations ‘good’, but not necessarily in all. Is it always right to be honest? To be patient? So there are actually no universal values that are true for all situations. (The one exception is, in my opinion, compassion.)

Rules
Over time, the values of a particular community usually become codified in a more formal way. These are what we call ‘rules’. These ‘rules’ can become incorporated into a group’s religion: for example, Christianity has the ‘Ten Commandments’, Islam has the Koran. But secular communities also develop their own rules, such as paying taxes or where to dump rubbish, based on what will promote social harmony. We sometimes call these ‘laws’. Even on a small scale, ‘School Rules’ are putting into words attitudes and behaviour guidelines that a person or a group of people have decided are acceptable.

This is something we must not lose sight of: rules are established to promote certain values. The danger is that people can become so focused on the rule that they lose sight of the values that lie behind it. How often do you hear a child ask, “Why do we have to do this?” only to be told “Because it’s the rule.” Yes, but why is it the rule? That’s the important part.

Blind obedience to rules, simply because they are rules, encourages passivity and unthinking acceptance. Children will simply learn that obeying rules keeps them out of trouble. This does not encourage critical thinking – that is, the ability to look at a situation and decide for oneself what is the most appropriate way to deal with it.

We have already seen that there is (almost) no such thing as a universal value that is always right; so it follows that there is no rule that can be right in all situations.

Another consequence of reliance on rules is that “Rules are made to be broken.” That is, a rule may be made by a group of people, but then is often imposed on others – usually from above. Anything or anyone that tells me what to do, instead of allowing me to make up my own mind, disempowers me. I feel put down. So I make myself feel better, more powerful, by breaking the rules, thus defying those who would impose their will. Teenagers immediately spring to mind.

A rule can actually only be enforced if there is some sort of deterrent. It could be something like “If you do this you will go to hell/get bad karma.” Or pain, or a fine, or be ostracized from the community. Sometimes the misdeed is worth the punishment!

This ‘deterrent’ mentality stifles thinking for oneself. Here is an example of what I mean: every time I wear a seat belt in a car, the driver says “Oh you don’t need that. There are no policemen here in the hills. You will only get caught in the cities.” Oh, so the only reason we wear a seatbelt is because it’s ‘the rule’ and we don’t want the ‘punishment’? Can I not choose to wear a seatbelt because it could actually save my life?

In this ‘avoid the deterrent’ mindset, children sooner or later come to the conclusion that not obeying rules is OK as long as no-one finds out about it. Thus they do not learn integrity: ‘doing the right thing even when no-one is looking.’ So how will they know what is the ‘right thing,’ anyway?

I would like to tell you a story from my own life. I was brought up a Christian, and therefore well aware of the commandment “Thou shalt not steal.” But at age 13 or 14, I was looking for excitement and power, and found these in breaking this rule: I would shoplift little things. The rush of adrenalin was thrilling.

One day I was in a small shop that sold sewing articles. I bought some thread and pins, but quietly pocketed a packet of needles. The two ladies at the counter were very friendly, asking me about my sewing project, and with smiling faces wished me every success. I left the shop feeling very ashamed. For the first time I realized that my actions were actually harming someone, a real person. I was not stealing from some anonymous corporation who would never miss the item, but from two friendly ladies. My deed had suddenly become personal. I saw that actually every deed has some effect on somebody somewhere.

This event, I believe, illustrates the key to teaching children values. Values (and therefore rules) have not been developed simply to curtail your freedom. Values are there to ensure that you don’t harm another person (physically or emotionally). Only this will lead to a harmonious community. So make children aware of this, right from the start. A good rule of thumb is, “Do unto others as you would like them to do unto you.”

Let’s say Mohan is trying to take a toy away from Neelam. Neelam hits Mohan and he starts to cry. Try to make both children see the personal consequences of their actions. Mohan has upset Neelam: “How would you feel if someone tried to take your toy?” To Neelam: “OK, so you were angry, but you hurt Mohan. When we hit someone, it hurts. You wouldn’t like him to hit you, would you? Can you find another way to show your anger that doesn’t hurt anyone?”

In this way we are teaching children from a very young age to think about the effect of their actions on others. (This is how ‘values’ were developed in the first place: if we want to promote a harmonious society, we will think about which attitudes and behaviour will affect others positively or negatively.) We don’t need to give the ‘value’ a name – whether it’s sharing or non-violence or whatever – the basic principles that underlie the values are what are important.

And it’s important not to load children with guilt by talking about ‘good’ and ‘bad’. These moral judgments are not helpful. Thinking about others is. 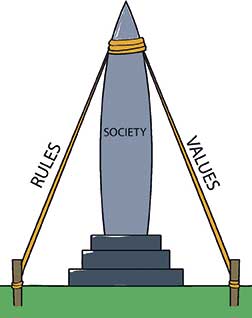 Later, at primary school age, children will be able to articulate what they think are appropriate attitudes and behaviours, and why. After discussion, these ‘values’ can be summarized into ‘classroom rules’. Having made the rules themselves, children are more likely to follow them. They are not following the rule because it’s a rule, they are conforming to the values that they have agreed on and that underlie the rules.

In situations of stress and conflict that may arise at school, constant reminders of the agreed principles will help children gradually to develop the ability to use these principles as a basis for deciding what is the right thing to do in any given situation.

The key therefore is that discussions of principles and values should happen within an actual context, i.e., with reference to a specific incident; ideally at the time of the incident, or if not then immediately afterwards. Discussions or lectures in a ‘vacuum’ have been shown to have little – if any – effect. It doesn’t matter how many lovely charts you make and put up on the walls – that’s where the values will stay: on the wall.

But there is something more important than helping children understand how to use certain principles to resolve issues. Your own attitudes and behaviour are going to have far more impact than anything else. “Values are caught, not taught.” If you want polite, respectful children, be polite and respectful. If you would like them to develop compassion, be compassionate. The younger the child, the more imitative he is.

Teaching children values needs to be part of everyday life, whether inside or outside the classroom. They will not learn values through passive obedience to rules imposed by someone else. Parents have a role to play – the biggest role, really – but we at school have also a responsibility, especially if the values children are learning from their parents are lacking or undesirable. And perhaps we need to have a long hard look at the values we are unconsciously imparting to our pupils through our own actions.

Turning chaos into order
Going beyond the rule book