I was approximately 23 when I was asked to tutor my first student. She was a firm little 7 year old and not easily impressed. Some way into our lessons, she dismissed Goldilocks with utter contempt. “What kind of girl is this? If you go to someone’s house and they are out, you come back home. Do you go inside their house and sit in their chairs and eat their food and lie in their beds?”

The fact that amiable, curious Goldilocks could be viewed as an ill-mannered little trespasser had never crossed my mind.

So my first lesson in teaching was never to try and get away with doses of “cute.”

I learnt more about that when my student returned from a family trip.

“She refused to sing any of the songs you taught her,” her mother said crossly to me. “She wouldn’t recite a single poem either. All our relatives wanted to listen to her, but she just sat in silence. Now, you ask her what the problem is – I am so upset that I can’t talk any more about it.”

“Well?” I asked, after her mother left the room. “What happened?”

Indeed. Just because someone is able to perform a task does not mean that they actually want to deliver on someone else’s whim or command. Ability, desire and performance are not necessarily interconnected. Lesson number two.

My student (now a homemaker) and I laugh over our memories, but I also see these examples to be indicative of critical thinking and individuality.

Teachers and institutions bask in the credit of moulding students, giving them opportunities and bringing out their true potential.

Do we see our own opportunities to learn even as we teach? Not from the information that a student brings us, but from their personalities and their perspectives, as we engage with them? Do we look up to our students for helping us find our own potential, as people not just as professionals?

I used to run a school magazine and one of my 15 year old editors had unmatched intellectual muscle to do most other things too. When she left school, it was with a clean sweep of every academic prize the school offered, and thereafter, it has been an unwavering journey fuelled by focused determination. (She is now an Assistant Professor at an Ivy League University, USA). Having such an energetic, demanding presence in my classroom made me stretch myself passionately and yes, pleasurably, to breaking point. In this case, it was as much an opportunity for me to discover my own will as it was for my student to excel. Finding the fire within…it is an incredible motivation and it stops one from settling for less when so much is expected and so much more can be had.

Mozart. I looked delightedly at the tape that the boy put into my hands.
“Play it,” he told me, smiling an impish smile, “But not just now – maybe an hour or so later.”
“What’s this about? Why the conditions?”
“Well, you know my parents are coming to see you…the music will put you in a good mood…you’ll say some nice things about me,” he said, and added with a 15 year old’s glee in getting the best out of a situation, “It’s called strategy.”

Do I use music before I meet parents as a strategy to calm myself? Very often! And I have a Senior Manager Product Marketing, in the Silicon Valley to thank for that!

As a young teacher in one of the finest boarding schools in the country, I was full of excitement. I wanted to build a rapport with my students without compromising on standard. I remember being in a state of sudden and bewildered deadlock with my class. Why wasn’t it working? Could they tell me where I was wrong? 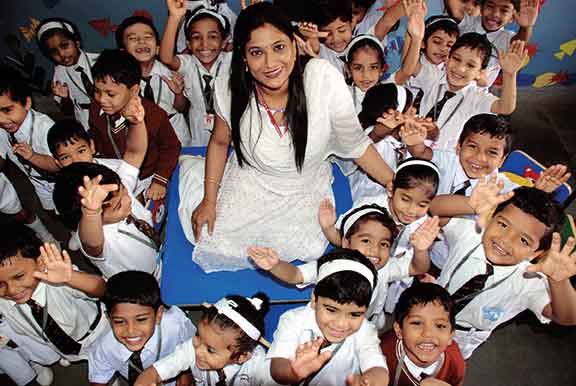 The accusations of several 14 year olds flew at me, and every sentence had a “you” in it. “You aren’t fair…” “You don’t listen…” “You have favourites…”

Later that day, I had a visitor from the class. He had been very silent through the chaos of the afternoon, and now he had come to give me the best piece of advice I have had on group dynamics.

“When you want to solve a problem,” he said, with the wisdom that makes him an intelligent, tactful Business Analyst today, “don’t ask what you did wrong. That’s how you make yourself a target. Ask how we can see where we can improve. Otherwise this will happen again.”

Better relationships come from acknowledging shared responsibilities. Truly a lesson for relationships way beyond classrooms and offices. All delivered by a 14 year old who (then) couldn’t have read Stephen Covey.

In the same boarding school, a gifted writer of 17 (now a freelance writer and sharp witted columnist in one of the leading newspapers of the country), articulated a strong view on authority and governance after an incident of defiance. A few boys had been playing table tennis at the wrong time. The master of the hostel had suspended them from playing the game till the end of term which was two months away. At the time, I didn’t see anything wrong. Breaking rules meant suffering consequences – what was wrong?

Although she was annoyed at my nonchalance, the girl asked me with distinct adult calm, “Isn’t the punishment disproportionate? One afternoon – and two months?”

Young people have the ability to alert us to matters we, as adults steeped in our authority, may simply take for granted, be unaware of or even insensitive to.

Disproportionate. The full implication of that word has certainly impacted my viewing any position of authority or of being in one.

Boarding school life can be enriching and fun, but it can also be very hard, both for students and for teachers locked away from the world in the same bell jar. Temperatures rise – there is strife, there is spite, and one is often left gasping for air. While student-teacher interaction is high, it is not always possible to have full back stories on what makes problems grow, fester, and manifest themselves.

A dining room is a noisy place at mealtimes and seating is difficult to find. From my position at the far end of the hall, I watched the girl advance to a table and take a place at it with the rest of her classmates. To my astonishment, everyone who was seated at the table rose as a single body and left. After what seemed a deliberate class act, the girl continued her meal, smiled at me when I joined her and we exchanged pleasantries as if nothing at all had happened. I marvelled that the girl did not dissolve into tears or leave the hall. Surely, at 15, that would have been an expected and fully understandable reaction. Today, a multi-talented and multi-tasking cultural anthropologist, she laughs at the manner in which I interpret a “small incident,” but for me, this has been a lesson in restraint and dignity – learnt from a distance.

As teachers, we know what it is to be made much of and feel the warm glow of appreciation. Sometimes, we even revel in it with a certain smugness, I am sure, and we enjoy the spotlight we are given.

Possibly from when she was 10, (but I knew her only four years later when I taught her class), she had been a performing artiste on the Mumbai stage and soon she took the school by storm in the annual school productions. Year after year, she had the lead role, but strangely untouched by the applause and accolades, she had a manner that remained most unassuming.

Today she is a teacher-practitioner of drama.
“Not an actress?”
“No,” she said. “I’ve always wanted to be a teacher.”
“Really? But isn’t drama what you studied? Isn’t acting what you learnt?” I asked.
“Yes,” she said, “but what is the use of learning anything if you can’t teach it?”