What do you remember most about school? Grumpy teachers? Bunking? Making excuses for the physical education class? Or Punishment? One could easily furnish a list of horrors that school inflicted upon them. But for me, it was really none of that.

I went to a Sikh community school where the medium of instruction was English. Named after one of the Sikh Gurus whose identity I choose not to reveal (and also it’s not important), the school’s hidden emphasis was really on religion than on education. I suppose it’s also the case with some Christian missionary and convent schools but since I never went to one, I wouldn’t know how to compare.

The morning assembly was an hour long rendition of Punjabi hymns and prayers sung to praise the Guru. In the end there was almost a subtle swearing of allegiance to the religion and the establishment of an exclusive Sikh nation. And everyone had to do it, irrespective of their own religion.

There came a point when the school management decided to enforce the compulsory ‘big turban’ (the one that Sikh men wear as opposed to the small one worn by boys) rule in the school. Also, it was proposed that boys were to dress traditional – a kurta and pyjama – and girls were to follow suit – a salwar and kameez. There was even a debate to extend the turban rule to all boys including the non-Sikhs. Though it never came into being in my time, it was laughed off by most students. 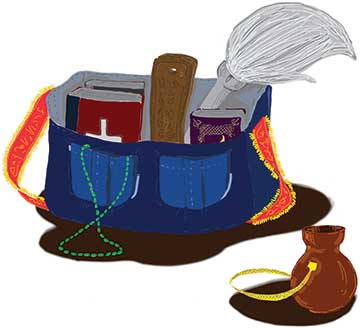 A few years later, a cousin of mine went to a Sikh community boarding school in Shimla, when he was about 10 years old. When he visited home during vacations, he recounted how he was made to get up at 4 in the morning and attend the Gurudwara housed inside the school. The boys were made to wear a turban and dress like the Sikh religious heads to sing prayers in the wee hours of the morning. And most of them slept through it. They were also compulsorily baptized (the adoption of the 5 Ks in physical appearance) at an age where they hardly understood the meaning or significance of the practice.

The sole purpose of his attending a boarding school was to acquire an “English” education, where he would learn to speak fluent English and impress everyone in the small town he came from. When he returned, all he could comfortably speak was a rustic dialect of Punjabi spoken in Himachal Pradesh. His parents would often ask us to converse with each other in English in their presence. And our exchange of “How are you?”, “I am fine, thank you!” would chuff them no end.

While I gave up my religion long ago, I still wonder about the imposition of religious education in school. Even if the school is managed by a religious board, it does not rule out the need for a secular space to learn and appreciate the diversity that comes together in a school. While mine is only one out of so many experiences, and perhaps an extreme scenario, I do feel there was some amount of subconscious shortchanging of the schooling experience. For instance, the music class was always about learning Punjabi shabads (religious hymns and prayers). The majority of teachers belonged to the Sikh religion and felt comfortable in the school’s environment to teach in Hindi or Punjabi. The Punjabi language often pervaded the goings-on within the school from classroom conversation to cultural programmes.

I wonder what has happened to the school today. I wonder if the rule of traditional attire and turban has been enforced. Since religion leaves little choice other than itself, the question remains: Is an overdose of religious education in school (such as in my case) likely to influence our life choices in any way? And is it fair if it happens? Who is to decide? Maybe the readers can answer!