In the current age of information and innovation, a shift in lifestyle from tangible lived experience to intangible ideas, thinking and experience can be noticed. This shift, impacts all aspects of our lives including education. Even though cultures like India have the deepest and rich learning traditions, they could not withstand the onslaught of socio-cultural domination by alien cultures. Alien learning systems in turn took a toll on traditional learning systems, and more importantly, generated a sense of inferiority among Indians. While India achieved Independence 70 plus years ago, “Indian education fell from the frying pan into the fire”. If the seeds for value neutral education were planted during the difficult years of colonization, the seedlings grew to be trapped in education through words rather than lived experiences in the age of globalization.

This article attempts to view this unfortunate development which is affecting learning, pedagogy, social responsibility and consciousness from the perspective of curriculum as a lived experience. Indian learning traditions have kept us informed that ‘learning can only happen in sublime environments, nothing can be taught; we learn through lived experiences’. The same precept provides us a context against which a new scenario for addressing neutrality to social culture and values can be addressed. In contemporary times, India needs to re-conceptualize and redesign traditional learning systems and lived experiences of social consciousness to fit the learning needs of learners of all ages.

India has a long tradition of philosophy and varied interpretations of value-based lived experiences and the space to engage in complicated conversations about the same. Insight (darshana) from lived experiences of values always had an important place. Families and communities were deeply rooted in ethics and values based on the insights of their lived experiences. While we classify Indian insights into 16 schools of philosophy in current times, there must have been many more learning systems embedded in each category. These learning systems engaged with each other through several modes of communication thereby creating acceptance for a vibrant heterogeneous ethical and value-based learning system.

We can compare the interconnected Indian learning systems based on lived experiences to natural systems like forests. It is impressive to see the interdependence and balance to coexist and provide support in natural systems. The interdependence in a natural ecosystem is central to the survival and growth of the system. Even though each species of plant is different from the other having a distinct identity, they provide space to grow and engage with each other to maintain the overall health of the ecosystem. Such a heterogeneous system can overcome adversity and tide over unfavourable circumstances. However, when India after Independence, decided to shift to a western learning system based on the requirements of the Industrial Revolution, it led to the homogenization of a diverse heterogeneous learning system. The learning systems developed to fulfill the needs of the Industrial Revolution in the west, were designed to mass produce clones having no individual identity or grounding. While mass production of learning is economical and efficient to meet the needs of the factory model, it takes a toll on identity and rootedness. Since the learning of ethics and values is based in cultural identity and rootedness to culture and aesthetics, Indian education lost its depth in lived experiences of values when heterogeneous spaces of learning were replaced with a homogeneous system.

Homogenization of learning systems coupled with poor infrastructure and dissemination structures, complexity in social structure and a heterogeneous population of more than a billion varying in culture and religion have created a gap and lacuna in Indian education.

Over the years, many researchers have repeatedly suggested that a single National Human Resource Development policy is not suitable for a heterogeneous culture with varied learning systems such as India.

Traditionally, learning has not only been heterogeneous in India but also followed an open source learning model like the platforms available in current times. Learning was highly individualized, rooted in local culture and way of life and encouraged engagement with the world through integrating culture and social consciousness in the process of learning. Open source education was where information was exchanged freely, assumptions were challenged and understanding of ways of life was open for people to choose from. For example, ancient India had an acceptance of an atheist school of philosophy and a materialistic way of life called ‘Charvaka’ philosophy. There was a healthy engagement with varied ways of life and being and they were considered important to the evolution of philosophy, culture and lived experience. 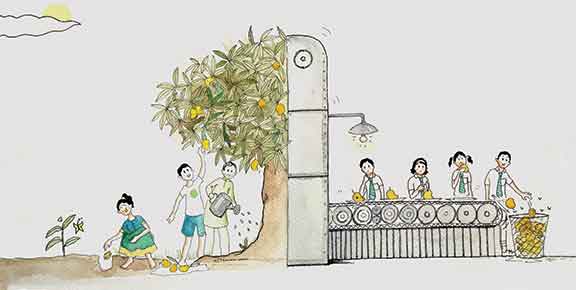 Learning as a cultural process
Children are flexible and can be moulded based on the spectrum of life experiences provided to them. The type of cultural conditioning a child receives decides the lived experience of his/her values and ethics. When children are exposed to a homogeneous value neutral education that does not acknowledge their cultural identity and their way of life and fails to contextualize their learning experience, there is a gap between their way of life and what happens at school. Then, the child, parent and teacher are all forced to gulp the concoction of homogeneity without understanding the core of disciplines and how they are interconnected. Memorization has become the norm as it provides an easy passage to homogeneity and even accommodates it. Lack of heterogeneous insights, basing learning on memorization of the word in compiled textbooks along with cutting out lived experiences with a sole focus on learning through the brain has led to a destruction of the various value-based indigenous learning systems across India.

Learning as a social process
Learning has always been a social process in India which is visible through its fairs, festivals, celebrations, art and craft forms and cultural rituals. This form of learning which was placed in a certain cultural context or a social process was rooted in values embedded in lived experiences. In the west, their cultural practices are rooted in religious scriptures and values based on following their faith. India never has been a witness to one organized religion, one faith or cultural identity. Learning was always a social process!

Several progressive philosophers and researchers in the west also have focused on the social process of learning in their own social and cultural contexts. Learning is a social process and individuals learn from their environment (Dewey, 1933, 1938; Vygotsky, 1978). The idea is taken forward with emphasis on learning ‘with space and time’ rather ‘than in space and time’ and making connections across themes rather than across subjects put into boxes and categories (Slattery, 1995; Sleeter and Stillman, 2009). The separation of nature, life and lived experience has been acknowledged in education in the west and researchers like Sobel proposed ‘Place-based education’. Place-based education is the process of creating a safe environment in the community by connecting people to nature, culture by building inter-relationships (Sobel, 2005). It is interesting to note that Sobel (2005) describes Place-based education as using the local community and environment as a starting point to teach and learn concepts in language, arts, mathematics, social studies, science, and other subjects entwined in themes across the curriculum. This paradigm of learning is quite like the Indian systems of learning which we have discarded in favour of a value neutral education system.

Sobel’s idea is in tune with Dewey’s (2009) description; Dewey (2009) described education as a continuous reconstruction of experience with emphasis on the social life of the child rather than individual subjects. The emphasis on hands-on, real world learning experiences via the medium of place-based education increases academic achievement, synergy, builds stronger inter-relationships within the community, leadership and heightened commitment to service and contributing citizenship (Sobel, 2005). Because of the synergy created, students and teachers are both involved in solving real world problems, teaching and learning as knowledge creators instead of being consumers (Sobel, 2005).

Whether it is the Indigenous Indian learning systems rooted in lived experience or the progressive approaches like constructivist pedagogy from the West, the common thread has been understanding learning as a social process rooted in local culture rather than a mass production mechanism with the objective of procuring a job! It is important to highlight that the purpose of education is towards a fulfilled and meaningful life no matter which cultural and social construct we place ourselves in the wide world.

The author is the founder and president for Adhya Educational Society, a non-profit engaged in improving quality of education in underserved government and private schools. She is also the founder of Ajahn Books, Ajahn Education Foundation and Ajahn Center for Pedagogy. She works with a vision to develop research and development engaging with theory, practice and outreach of pedagogical perspectives in education across socio-cultural diversity in India and the world. She can be reached at madhusagaram@gmail.com.

Moving towards a world of open education
Is open education really open?
The present is open to all
Opening up the code
My rendezvous with FOSS