The committee drafting the National Policy of Education 2019 received more than 55,000 pages containing over 1.28 lakh comments on the draft National Policy of Education 2019. The inputs they received are a wide range, in terms of content and complexity. Some of them are cursory superfluous comments, while some are complex papers written by academics suggesting alternative approaches to particular issues, for example teaching a language in a multilingual environment. The policy committee has formed a large team of people to read these responses, analyze them, determine what changes to the draft policy document they imply, and decide whether or not the policy should be changed accordingly.

Given the complexity and importance of this exercise, soliciting review responses from the entire nation seems unexpected, if not incredible. The policy document mainly contains the aims of education on which different people would have different opinions. What is the purpose of asking all citizens about their opinions on educational policy? How would people claim to know the aims of education for everyone? In this article I would like to talk about three aspects of this situation that are essentially democratic. 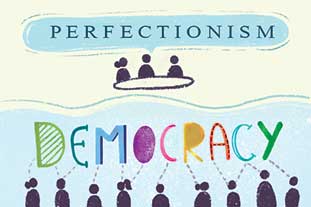 Perfectionism and Democracy
Some people say that the result of any exercise would be better if a few experts work on it, especially issues like educational policy. Including millions of people in the process would make it difficult, if not impossible, to make it perfect. This approach is called perfectionism: perfection being considered most important. But democratic societies do not value perfectionism over participation. Participation, and hence non-perfectionism is fundamental to democracy. Now what is the justification for this principle?

We need to note that it is non-perfectionism, not anti-perfectionism that is fundamental to democracy. Democracy is not against perfectionism; democracies prioritize participation over perfection. It is more important for everyone to participate in the decision-making, than taking a “perfect” decision, perfection defined by a few people even if they are considered experts. If we take only expert opinion on education policy, and hence aims of education, it amounts to their idea of good education being imposed on all citizens. But in a democracy everyone has the freedom of choice to decide how they want to live their life. No one interferes with others’ choices, unless they are able to justify why they do so. Justification cannot be unilateral, it can only be the result of a conversation between both sides. This makes it necessary to conduct a conversation between the committee and the citizens on their priorities in education. The public consultation on the National Education Policy is this conversation.

The form of public consultation
Is public consultation a mere polling of comments or individual opinions? No it is not. The comments are not mere opinions. People are expected to clearly state how the recommendations will benefit India and Indians, and indicate what policy changes should be made so that the entire nation gains from it. So the comments also need to contain reasons for opinions. Reasons give an insight into the comment, and the principles on which the opinion is based.

For example, if someone is criticizing the recommendation that Hindi is being made compulsory, they also need to say why they criticize this idea. There could be at least three different reasons for this (if not more). One reason is that having one common language is a good idea, but that should be English not Hindi, since English is recognized all over the world. Another reason could be that we should not try to make any single language compulsory; it is necessary to educate children in their mother tongue and in multiple languages. A third possibility is a person saying, (s)he is against Hindi as a common language because that amounts to majoritarianism. These reasons are based on entirely different principles. So even if the committee considers removing the imposition of Hindi, the reason chosen as justifiable will determine what is done as an alternative. A change in policy based on the first reason would be very different from a change based on the second or the third. This makes reasons for opinions very important and hence necessary.

Objectivity and intersubjectivity
The process of public consultation happens to receive different recommendations and also reasons for them. At the end we get a huge database of different private reasons each person holds. But we need contributions to the policy, not a database of private opinions and private reasons. How does one distinguish between private opinions and contributions to a public decision?

The difference between the two is that the first question (“What should be the common language for all Indians?”) demands empathy from me. I have to think for everyone, not only for me (or me, my family and friends). It demands that I think intersubjectively. Intersubjective thinking is empathic thinking. It occurs when we think, “What might others want?”; when we put ourselves into the other one’s shoes. If we put ourselves in others’ shoes, we necessarily have to think rationally, meaning, “How would any human being think?” In this case, I have to imagine what language any Indian might want.

If empathy is a necessary condition to answer these questions, then everyone needs to feel obliged that the policy (and the aims of education) is suitable and good for everyone else. This obligation makes it necessary that I don’t give private reasons, but reasons that are valid for all Indians. Does a public consultation encourage this sense of obligation? 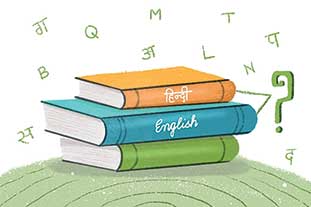 Obligation to others
Christine Korsgaard (a renowned American philosopher) argues that when we give reasons for our opinions, it is not possible for us to give purely “private” reasons. She argues that purely private reasons do not exist. She says sharing reasons is “to talk in a shorthand way about relations we have with ourselves and one another.” When we write reasons that will be represented in public, or even just communicated to someone else, we are automatically concerned about whether the reason represents the kind of person we are. We are concerned: “If I say this, what will others think of me?” This implies we have to think whether this will be good for others.

We are also worried about whether others will be convinced of this. When I give you a reason for why I hold opinion x, I am also expecting implicitly that you will agree with my opinion. When we express a reason in language, we communicate reasons we believe are acceptable for other humans. This makes any space where we share reasons a “space of linguistic consciousness”. Spaces of linguistic consciousness are essentially public because they contain reasons why the recommendations are suitable for everyone, not only me.

It would help to quote Korsgaard to understand the space of linguistic consciousness better.

If I call out your name, I make you stop in your tracks. (If you love me, I make you come running.) Now you cannot proceed as you did before. Oh, you can proceed, all right, but not just as you did before. For now if you walk on, you will be ignoring me and slighting me. It will probably be difficult for you, and you will have to muster a certain active resistance, a sense of rebellion. But why should you have to rebel against me? It is because I am a law to you. By calling out your name, I have obligated you. I have given you a reason to stop.

Of course you might not stop. You have reasons of your own, and you might decide, rightly or wrongly, that they outweigh the one I have given you. But that I have given you a reason is clear from the fact that, in ordinary circumstances, you will feel like giving me one back. “Sorry, I must run, I’m late for an appointment.”

When anyone says something aloud, others have to consider it (it is impossible for them to ignore it). In fact, humans need much more effort to ignore or confront a reason, than to accept it. Each of us has private consciousness, but others can intrude into it; similarly we can intrude into others’ consciousness by using language and giving reasons.

Public consultations are spaces of linguistic consciousness. When we recommend something in a public space, we should have thought of universal reasons for the same; reasons that everyone will agree with. In fact if we disagree, we have no choice but to counter the opinions with other reasons. We need strong reasons if we do not want to consider their reasons. So the resultant reaction is to accept or to offer contrary reasons. This process of exchange of reasons results in a public evaluation, strengthens good reasons and weeds out bad reasons.

More importantly, formulating a reason for our opinions in language also compels us to critically evaluate our own opinion. We want to be sure we are saying the right thing, if we are saying it aloud, even just to ourselves. To that end, expressing ourselves in language is eminently educative. There is a moral necessity for spaces of linguistic consciousness.

Conversations in a classroom
This discussion on public consultations is as applicable to conversations in a classroom. There is immense benefit in developing the classroom into a space where thoughts are expressed in language. Needless to say, language need not be reduced to words or sentences alone, it includes expression in all forms, including facial expressions, behaviours and actions. It is an expression of reasons for what we think is pertinent, not mere words.

This kind of conversation will help each of us bridge this mythical gap between private and public consciousness. It will make us aware of the unjustifiable power we are imposing on others, lack or presence of empathy and develop an attitude of taking decisions good for everyone, not only ourselves. It will also coax us to reconsider and re-evaluate our opinions, especially active re-consideration of our opinions, and the realization of our public empathic selves.