Many teachers do not enable the children at all. Oh, the kids do well in exams, but that does not mean they are enabled. Look at your own schooling. You were probably told to open a page, to listen or read the contents, to answer certain questions some of which were there on the page anyway, or in other cases to transcribe the answers into your copy-books for ingestion and later regurgitation, rewarded with a score that reflected the accuracy of your memory, and maybe of your spelling and handwriting. And you went on doing that. Now you are an educated reader of this prestigious periodical. Actually, if you are a reader of Teacher Plus, then somewhere along the line you escaped this insidious farce and got yourself better equipped to be what a teacher should be. 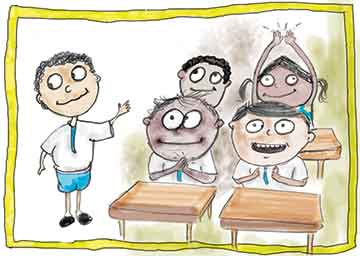 The children are not enabled to do anything in this ubiquitous “method” of teaching. (I keep returning to Tagore’s The Parrot, and weep that he was in effect wasting his priceless time.) Oh, I hear you say perhaps, ‘You are a stone-thrower, an iconoclast.’ I stand and respond “Guilty as charged!” I am truly angry that this system is acceptable to well-paid personnel year after year only because the kids score adequately in exams. Angry? Why? Because this is only a fraction of the teacher’s task, and a poorly handled fraction at that. Yes, principals are content, parents are content, but it is simply not educative. We teachers, when we take up our task, are by virtue of our undertaking, committed to ensure that growing is as much a part of the education process as knowing. And that is just not done. Many of our teachers don’t even know how to promote the growing part of the child’s development. No blame to them and blame is not a solution. Re-learning is.

Kids grow by being given choices, by being encouraged in creativity, by being given responsibility. And kids grow through socialization. Few or none of these are allowed for in our usual educative processes. Certainly, all of these areas must be carefully supervised by the teacher, but not obtrusively. Total license begets a Lord of the Flies situation.

An illustration or two. Why must the teacher insist that the copybook be the school copybook with the school name on the cover? Why must the child use a pen and not a pencil, a pencil not a pen, blue not black, black not red? Why must the books be covered? And so on. Making choices of any sort is a maturing process. In all classes. Of course the choice must be an informed choice. They must have some idea of the issues involved, for example that if they use ink on a page it is much more difficult to erase.

My senior boys wanted to do a class presentation (verbal) on pornography. The lad made his speech and won the applause of his companions. Then he turned smiling to me and said, “So that’s ok, sir?” I said, “No, lad.” He and the class were surprised. “But why?” And then I told them my reasons why, not using any such words as ‘evil’ or ‘sin’ or the like. After the period, a couple of the kids – including the speaker – followed me on to the verandah to say ‘Thank you, I never saw it that way before’. From the angle of this article, I was carefully allowing them to make choices – but enlightened choices. 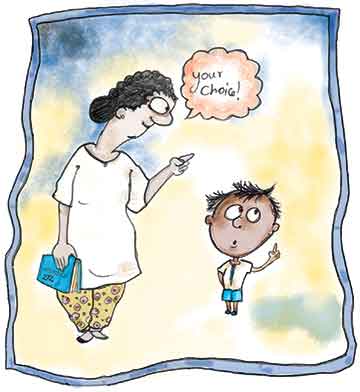 I worked for ten years in CINI Asha, an NGO (founded by the great Dr Samir Choudhury) in Kolkata that looks after street girls and boys. I was in the education department of the girls section. They were foul-mouthed, violent and thoroughly resentful at being cooped up under supervision 24×7 with legal approval. I was in charge of planning their formal education, and in that process I was introduced to their dance teacher. She was a large lady, and my mental response was OMG! But as it happened, she was terrific, and she put the Bengali and Hindi filmi songs to dance movements that bit by bit they got to love. It was an excellent catharsis, and a few became really accomplished dancers – and lost their foul mouths, their violence, and their resentment. We encouraged art, hair styling and lots of other creative things, as well as intense teaching of the three Rs (in Bengali) to enable them to get admission to an age-appropriate class in a government school. Wonderful growth happened among them – so much so that at the end of the year (government funding lasted only one year) they didn’t want to leave us.

Many schools have prefects, captains and the like. Very good – but in the SERVE system we encourage team learning and each team has a captain who is changed every two or three weeks. During that time she/he is responsible for just about everything connected with the team. So by the end of the year every student has had the taste of being in charge, and being answerable, for others. Responsibility matures them.

Socialization is a growth process. What kids normally enjoy most about school are their friends. But in the team system just referred to, the process requires each member to look after every other member, so that the brighter must surrender their inclination to selfishness on behalf of the team, and the slower must try harder to help the team win points, with the result that as the year progresses every member of the team is prized by her/his mates and applauded for every point earned. This is a huge factor in the educative process. The weak ones learn they are much less weak than in previous classes they had been allowed to believe, and the shining stars learn that they continue to be shining but in the process, that shining must light up the minds of her/his team mates.

And lastly, the lesson proper. I have found that instead of starting off by telling the class to ‘open page 27’and then telling them all about it, it works much better if I tell them, ‘Work together in your teams, help one another, and I’ll give you a quiz after 20 minutes.’ I don’t have to waste the time of the clever ones, or make the dull ones feel yet again that they are inferior, as I have sketched in the previous paragraph. They teach one another, they go at their own pace, and I am there only when the challenge is too much for any of them to handle, like discovering a formula to find square roots.

So then: I am saying in this piece that we teachers need to help the children to grow as well as to know, and that the structures of each of those two processes must be given adequate attention. Otherwise the present wretched system will carry on, and our poor country will continue to turn out unimaginative babus, thwarted enthusiasts, graduates with international inferiority complexes, and authorities who learned their jobs from texts and examinations that turned them into robots. We can change that.

The author is a hands-on educationist and consultant. More than 50 years in India, he has taught in gutters and railway platforms, in colleges and universities, and heads an NGO called SERVE. He can be reached at macbren72@gmail.com.