A lesson in electricity using a clip from Swades 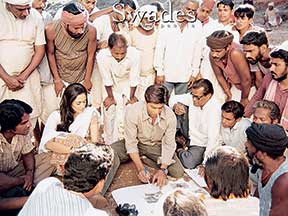 Ashutosh Gowarikar’s 2004 film Swades features Shah Rukh Khan in the role of a NASA scientist who visits India and decides to stay back in his motherland and work for the upliftment of his countrymen. There is a sequence in this film where Shah Rukh takes the initiative of setting up a hydro electric power station in a village. It is a six and a half minute long sequence where we see the entire village congregated to witness the generation of electricity. Water has been stored in a reservoir at a height and a turbine fitted to a dynamo has been positioned at a lower level along the path of the ‘waterfall’.

The sequence begins with an electric bulb dangling from the thatched roof of an old woman’s hut. Some villagers come and inform the woman that the bulb will soon light up. Soon the sluice gate is opened, water gushes out of the reservoir, expectant faces watch the water droplets bouncing off the turbine blades even as Mohan (the character played by Shah Rukh in the film) keeps an eye on the speedometer reading. The voltmeter crawls up to the magic figure of 250 volts. Suddenly the flow stops, the voltmeter needle drops to zero. Mohan runs up to check and finds some fibres blocking the mouth of the reservoir. The water begins to flow again and eventually there is a long lightning like spark across the electric poles. The bulb in the old woman’s house begins to glow. She whispers ‘bijli’.

This is a heart-warming sequence exuding a lot of positive energy. How can a physics teacher put it to use in the classroom? Here are some suggestions:

After showing the clip, initiate the discussion by asking questions about conservation and transformation of energy.

The lamp lights up and radiates energy and happiness. But from where is this energy coming? Obviously one form of energy is getting transformed into another. To begin with, water at a height has potential energy. When the water is allowed to fall, the potential energy gets converted into kinetic energy. This energy gets transformed into rotational energy of the turbine as the water hits the turbine. As the turbine rotates, the electric coil between two poles of the magnet rotates and current begins to flow through the coil. The faster the rotation, the stronger is the current.

Draw blocks on the blackboard and ask the students to fill the blocks:

After they fill in the blocks successfully, you may ask, “How much water should fall from a height of 100 metres in one second to light up a bulb of 100 watts?”

This is a fairly simple calculation based on the formula E = m x g x h. 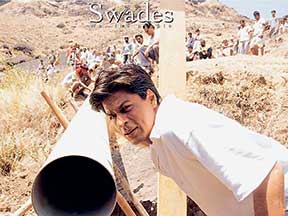 The next question can be a little more complex, “Estimate the electricity requirement of an entire village of 100 households.” To answer this question they will have to estimate how many fans and lights each household may have and how many kilowatt hours of energy these may consume in a day. It might help to compare the electricity bills of their own homes. The teacher may introduce the concept of one unit of electricity at this juncture. Also, there is a sociological dimension to this question and peer to peer exchange can work very well in answering this question. Once the students get a reasonably correct estimate, they will realize how much more energy an urban household consumes compared to a village household.

Students’ group work on these two questions and comparison of their results will easily take up 40 minutes of the class. The teacher may conclude the class by asking “Why was it so important to push up the electricity to 230 volts?” If the teacher does not ask this question, a bright student in the class is very likely to ask the question because in the sequence shown to them a lot of emphasis has been given to the voltmeter reading through repeated close-ups. The answer to this lies in the design of the standard bulbs. The students must realize that car headlights require only 12 volts to give an equal amount of light. 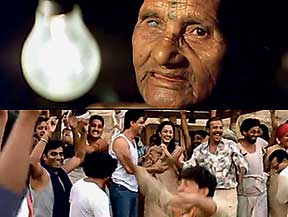 Many films take such cinematic liberties. The teacher must point it out to the students because an unsuspecting mind would take for real whatever is shown on screen.

When a film clip is used as a teaching aid, it is likely to generate a lot of interest in class. The teacher can harness the high level of interest by giving an assignment like “Find out major centres of hydro electricity generation in India”. Such assignments will help to prolong the learning experience of the students and keep their interest alive.

This lesson using the clipping of Swades has been designed for class X. But the clip will be equally engaging to higher classes as well as lower classes. With some modification in the exercises and the post screening discussions, the lesson can be taken with class VIII or class IX students.

An end note in praise of popular films
Using popular films in the classroom has several advantages. There is an immediate connect between the teacher and the students. Interest level of even the backbenchers goes up sharply. Dry subjects suddenly spring to life. Abstract principles get illustrated in real life situations. Therefore, it is a good idea to keep a compilation of appropriate clippings of popular films to be used in the classroom occasionally. It is easier to create a compilation for literature, history, and social sciences. But for physical sciences and life sciences too, popular films have some gems to offer. Popular films are easily available, a lot of human and financial resource goes into their making and this gives a touch of sophistication to the look of the film. An appropriately chosen scene of a popular film can touch upon various facets of life and integrate various academic disciplines on to one platform.

However, one must keep a few things in mind in order to make the lesson effective and fool proof:

As teachers, let us take a second look at popular films and identify portions that may be used to elevate the classroom experience of the student above the humdrum of talk and chalk.

The author is the secretary of Bichitra Pathshala, an organization that promotes learning with moving images. She is also an associate director at iLEAD Institute, Kolkata. She can be reached at [email protected].