A recent trip to Rishi Valley School (Andhra Pradesh) presented an opportunity to interact with students in different classes on divergent topics. During the trip I enjoyed being with the students and partially succeeded in soaking in their energies, enthusiasm and knowledge. But, it was their eagerness to know more that left me stunned and pleased at the same time and in no small measure. As Eugene Ionesco put it: “It is not the answer that enlightens, but the question.”

My interactions with the sociology and ecology students
I shared my experiences at Baghmara (South Garo Hills, Meghalaya) and Saiha (Mizoram) with the two sets of students. For my interactions with the sociology class I decided to focus on my experiences in South Garo Hills – of starting a fresh base, undertaking surveys, setting-up an office, interacting with the villagers and with the government authorities. While talking about my experiences I did not use any photographs or PowerPoint. In the ecology class I talked about jhum (shifting-cultivation) using images and asked and answered questions. Jhum, once a widely prevalent form of cultivation, has people cultivating on different plots each year after the forests on the plots are burnt down. Intricately linked to culture, today, jhum faces a slow death.

Snippets of what I shared in the sociology class
I arrived at Baghmara in May 2004 after the initial surveys had been undertaken. My role was to set up our office and home. Two of us had gone to do the job with two bags each.

We selected a few villages for our elephant conservation programme but had to take permission from the Nokma before we began our intervention. The Nokma is the head of the clan that owns the village.

It took a while to figure out when and where best to meet people. Six in the morning at the different tea stalls seemed the ideal time and place to begin our interactions with the locals. Tea stalls were places where people socialized; they also served as pickup and drop points for public transport. This meant that in a day we sometimes ended up gulping 10–12 cups of tea. 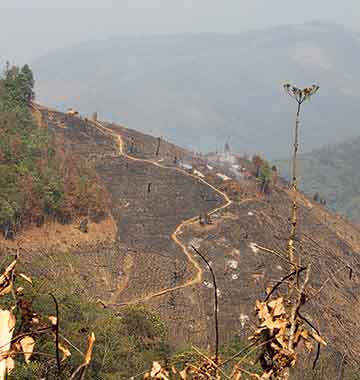 A forest department officer had warned us that people often came, conducted their research and went away (earned fame and money) without bothering to even share the reports of their surveys causing even the line-departments to be wary of sharing information. People took time to open up, but the more they saw of us in their villages, moving and eating with them they seemed happy to talk to us. We shared our reports regularly (in Garo) with them!

Our constitution gives people in select areas a greater right on their land and resources vis a vis the others. Garo Hills is one such area.

Select questions that followed in the class
How many of you set up the office? Were the other people involved familiar with the landscape?
How did you know who the Nokma was?
How did you talk to people given the language differences?
What reason did you give people for being there? Did you tell them right from the beginning that you are working towards elephant conservation?
How knowledgeable are the locals about elephants? Do they know they have one of the highest elephant populations in India?
Have you collected folk stories of the landscape?
What are Schedule 5 and Schedule 6 areas?
How is it a matrilineal society if power lies with the men? Why does property pass on to the youngest and not the oldest daughter?
Was there a point after which people came to accept you?

What I shared in the ecology class
Below is a question-answer session that followed my sharing images of jhum.
Is jhum rice different from wet rice? (It surely is.)
Are there varieties of rice in jhum? (Of course, I am not aware of these though.)

Does the government decide where jhum will be done? How? (We discussed who takes the decision and how this has been ‘affected’ in recent times. In Garo Hills the Nokma used to play a major role in the decision (headman) but with privatization of land (ingress of orchards), he doesn’t play as significant a role now.)

What else is grown besides rice and maize in jhum? (We briefly touched upon how research has shown a 2 acre land to have 40+ crops; the range is amazing – from tobacco to mustard, from broom-grass to chilli and my favourite pumpkin.)

Why is jhum not sustainable today? (We briefly discussed the decrease in the availability of land, shorter cycles, interest among people as the reasons.)

Why are young people not taking up jhum? (We talked of various factors like need for cash in today’s time while jhum is more tuned to self-sufficiency, it being one of the more difficult cultivation practices, there being no support from the government or rather the government propaganda against jhum.)

If government officers who take decisions are from the same region why do they not support jhum? (This was a very pertinent question and it pleasantly surprised me. We discussed how they could be from the same tribe but brought up with the ‘mainstream’ understanding of ‘development’ which believes that jhum is the worst form of cultivation! They would want their region to ‘develop’ according to the ‘mainstream’ parameters. The school of thought that believes jhum is an evolved form of agro-forestry is a minority.)

Do people hunt more since they get less food from jhum? (People are planting orchards and plantations in place of jhum, which don’t make good natural habitat for wildlife. They don’t spend as much time as earlier in the ‘fields’ either so they end up hunting less.)

Aren’t rat poisons very harmful? (This was in response to a point where we discussed famine on account of bamboo flowering in Mizoram (mautam); rat population had spiraled in a crazy fashion and was devouring the crops; to mitigate this, steps were taken including distributing rat poison – bath soap sized cakes.)

I (and no two thoughts on this) returned wiser from my trip to Rishi Valley, for like John Locke nicely put it: ‘There is frequently more to be learned from the unexpected questions of a child than the discourses of men.’

Note: I am indebted to Rishi Valley School, its students and teachers, especially Radha, Santharam, Kaustubh and Sonali.

The author tries to explore and comprehend wildlife conservation. He is interested in history, loves walks in the open and many at times attempts to pen his thoughts. He can be reached at nimesh.ved@gmail.com.