When I first joined a primary school in the hills of Uttarakhand (where I was to mentor the English programme), I was struck by the difficulty the teachers had in delivering the curriculum. At first, I was at a loss to understand this – until I looked at the textbooks that they were using.

While each ‘Unit’ introduced valuable skills, I could not find any logical progression in the material taught. The order in which new structures were introduced seemed random (with some difficult structures introduced before the easier ones); and new material in any particular Unit did not build on the structures or vocabulary that had been learnt before. Not only that, there was no coherence between the structures and vocabulary in any text, and the exercises that went with it.

No wonder the teachers were struggling!

A perusal of a large number of other publications revealed exactly the same problems. Faced with this dead end, there was only one solution: to write our own material. Once we had decided on a rough idea of which structures to introduce and in which order, we had to come up with some texts which would
(a) introduce and practice the new target structure;
(b) introduce new vocabulary; and
(c) continue to use and practise structures and vocabulary from previous units.

One thing was uppermost in our minds: that the situations in our stories and dialogues should mirror the children’s lives and experiences – that is, a rural hill culture of small holdings and a semi-subsistence lifestyle, with occasional outings further afield.

Basing situations on daily life as viewed from a child’s perspective – not just any child, but specifically children who live here (in Uttarakhand) – means that students are able to relate more easily to the story, be drawn in and find resonance with their own experiences of life. This, in turn, leads to greater engagement, interest and motivation.

To complement the textbook, we wrote simple little storybooks with similar stories, again based on lived experience.

Here are some examples of our stories: 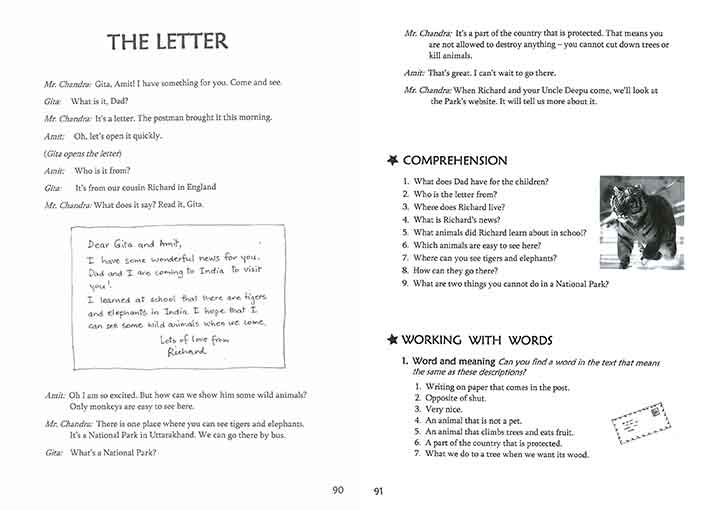 Just as important as what to include, was what not to include. Therefore, we were very conscious of the vocabulary we used in our texts (as well as on the flashcards that we use for teaching words in grade I.) We therefore eliminated any words outside the children’s realm of experience, such as nib, mop (no need for mops if you have a mud floor!), lotus, giraffe, violin, fork, wheelbarrow, crab, fridge, shower, gardener, etc. Similarly, we made sure that the illustrations showed familiar surroundings, and depicted clothing that local people would actually wear.

Because the content of the story or dialogue reflects the children’s lives, there is plenty of opportunity for the teacher to initiate some oral conversation practice linked to the theme of the text, as part of the lesson. (If it’s a story about a puppy: “Who has a puppy at home? What is its name? What do you feed it? What other pets do you have?” etc.)

These considerations form the basis of the textbooks of the first four years. But for the grade V book, I wanted to expand the children’s horizons a little. Among other things, I wanted to make the children more aware of their wider backyard, i.e., the province of Kumaun in Uttarakhand, where they live. Most students have never been outside their village, except, perhaps, for a bus trip to visit relatives in a nearby village. Their knowledge and exposure are consequently very limited.

I therefore devised a series of four linked Units, concerning a proposed visit by the cousin of the two children who feature in most stories. This cousin lives in England and writes that he would like to see some wild animals such as elephants and tigers when he comes. The children are perplexed – elephants in the Himalayas? But their father tells them that there is a National Park in Uttarakhand where there is a tiger reserve. (Almost none of our students had ever heard of it!) The following unit has the children look up a website about the National Park (thus learning about the park and also about websites at the same time!).

Next, they book into a hotel in the park itself and find out about various activities on offer. While at reception they pick up a brochure about the local hero, Jim Corbett, after whom the Park is named. The fourth Unit is the story of Jim Corbett’s life. The students are thrilled to learn that he once shot a man-eating tiger in Mukteshwar – our neighbouring village!

This approach to teaching English – keeping it local and child-centred – has reaped enormous rewards. Because the situations are meaningful to the students, they look forward to each new story or dialogue, thus engendering motivation, without which learning will always be a struggle.