“I am just like the millions, not one in the million. I am no different from others. Any girl can do what I did; all they need is doggedness, determination, the will to push hard and push through boundaries, and never-ending commitment to achieve their goal.” – Sakshi Malik, Indian Wrestler

Malik’s quote is more about individual commitment. Success and participation in sports appear to be self-driven and self-motivated, but in reality schools play an important role in encouraging and involving girls in sports. This article discusses and draws attention to how organizing sports and physical education in schools can help girls participate in sports. It points out to the factor of not just involving and helping girls participate but sustaining their engagement with sports.

If one asks, why this should be a matter of concern, the answer is that research indicates that girls dropping out of sports is twice the number as that of boys by the time girls attain puberty. It is also a matter of concern for the reason that sports or Physical Education (P.E) is an important component of growth, development and well-being. 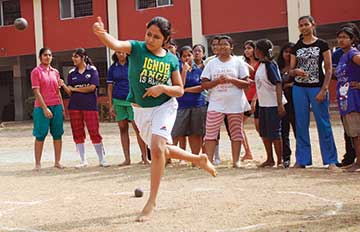 Participation in sports helps develop important social skills – negotiation, collaboration, team building, etc., which are important skills and the need of the hour. Physical aspects such as being energetic, building of strength and energy and feeling brisk is taken care of when one is involved in sports activities. It helps in building bone and especially vitamin D and calcium. Muscle gains and bone mass increases with physical activity and this helps in later years. Sport is found to contribute to cognitive development. Multitasking, complex and dynamic visual and spatial coordination is enhanced with the involvement in sports. It reduces the risk of getting depressed. Moderate to intense physical activity is a must for children, recommends the World Health Organization (WHO).

Now that the aspect of well-being and role of sports has been discussed, I will move on to explore issues related to the participation of girls in sports and how it can be addressed.

Though girls show interest in sports, they tend to drop out due to various reasons especially in the teenage years. A lot of it is related to social stereotypes and stigma. I explore a few reasons below.

Gender stereotypes: Often girls are advised not to exert themselves much and are encouraged to play indoor games. Most of the sports and games are considered more suitable for boys as they involve a lot of physical activity. Girls involved in sports experience bullying and body shaming.

Issues with menstruation: The taboo around menstruation makes girls withdraw from physical activity and games even if they have actively participated in sports in the primary school years.

Lack of spaces and facilities: Many schools do not have enough space or playground and public facilities are few in India.

Availability of female coaches: In India, there are few role models and coaches. Trained female coaches are few. Teaching of many games and exercises involves touch and often learning it from the opposite sex becomes an issue.

What can be done?*
Gender desegregation: All sports and games need to be played together. Schools can take the lead of not segregating girls and boys and allowing them to play together. This often breaks the stereotypes and one finds that girls can play with just as much skill and agility as the boys, when given a chance. 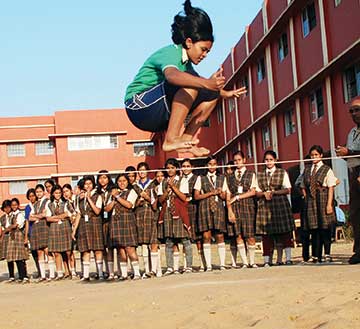 Games which are inclusive: Instead of fostering competition among girls and boys, schools can think of games that are inclusive. Nurturing collaboration and helping them play as a team helps to foster positive and healthy relationships.

Games which have self-goals: The Nali-kali initiative or Activity Based Learning (ABL) have learning goals and students move from one step to another on their own. They allow students to explore on their own and self-evaluate their learning. A similar approach can be tried in games and sports. Games which help students decide at their level can be encouraged initially. For example, cycling, gymnastics, skating, trampoline, swimming, etc., have different levels or stages. Often, children learn more from their peers than from coaches or adults. They tend to improvise and challenge themselves. In cycling, we can see that children try to ride without holding the handle bar, or challenge themselves not to break, but at the same time are able to control their speed and try to wheel or balance on their own. Similarly, in a pool/ trampoline, one can see them jumping, flipping, somersaulting or attempting multiple flips in the air before landing. Most of these are unsupervised and if children are allowed to learn from each other and teach each other, they tend to master the skills more easily and without pressure. Children like challenges and like to test their own physical limits. They need to be advised on safety and need to be left to themselves to explore every day in school.

Women coaches and role-models: Having role models and inviting women achievers to school and having them talk about their challenges, how they overcame hurdles, some of the routines they followed, etc., can motivate students. Hiring women coaches and teachers is also important, as there might be parents and adults who may take time to accept equity in sports.

Integrating sports in other subjects: Often PE is seen as a free period and many girls tend to sit under the tree and giggle or talk. However, if sports and movement is integrated with teaching physics, history and mathematics, for example, students will not view sports or PE as a separate activity. Concepts such as distance and time, force, etc., can be taught using physical movements and making sports/games part of the lessons might help girls feel that they can also participate and excel.

Work with parents: Parents need to be involved in order to bring about a change in their mindsets. Parents can play an equally important role. Parents can encourage their children to run or swim or take up physical activity. If there are parents who are experts in a sport, schools can enlist them as coaches and get them to volunteer as escorts during games and sports events.

There are multiple possibilities and schools can decide to focus on a few sports, if not all. Schools need to have a well-thought through sports curriculum and think of sports as a means for equity and inclusiveness. Involving girls is challenging, but schools need to keep trying multiple programs and strategies.

Schools often focus on academic work and tend to treat PE as an extra-curricular activity. Educators and teachers need to be trained in the holistic development of children. Schools need to think of sports and games as an important component of growth and give it the attention it requires as a first step. Involving girls consciously, encouraging them actively and sustaining their participation is the next step that schools need to work on. Sustaining the involvement is another major challenge and hence schools need to think of integrating sports across the curriculum, especially during class 10 and class 12 when examinations and academic performance take precedence.

*Some of the suggestions offered above come from observations of sports and P.E in different progressive schools and as well as observing my own daughter’s patterns of involvement, achievement and withdrawal in different phases.

The author is an independent educational consultant. She has been involved in teacher professional development for a decade now. Her interests are gender, science education and teacher development. She has submitted her doctoral thesis at TISS, Mumbai. She can be reached at [email protected].