What could have compelled Sweta to take the extreme step of slashing her wrist? Or, of threatening to jump over the balcony railing? We are talking not about a disturbed young woman, but a mere seventh grader in school! Depression among adults has become commonplace. However, depression among children is increasing at an alarming rate. The reasons are many – broken homes, parental pressure, a stressful lifestyle, and learning difficulties that remain unidentified.

Kishore, a thirteen-year old, had not been attending school for over a month. The child began avoiding school with simple excuses like he had headache or was feeling nauseous. As time went on, it led to an absolute refusal. Looking back, his background revealed a long history of being ostracized by family members for poor performance at school. He was compared with other more illustrious cousins and berated for being ‘lazy’ and ‘ádamant’. At school, the attitude was no less callous. His teachers berated him publicly for his failing grades. He was pronounced incompetent and lacking in interest and concentration. Due to the policy of not holding back any student, he was promoted each year. 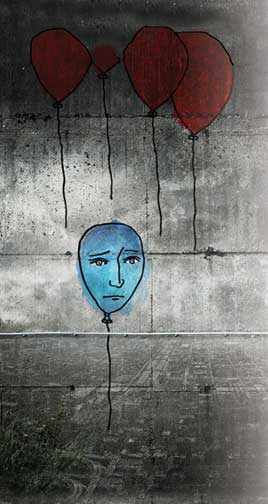 Little did anyone realize, both at home and school, that the child was unable to cope with academics at the existing grade level. Though he sat in the classroom, most of what was being taught was beyond his comprehension. At home, the child exhibited intermittent bouts of screaming at his mother or crying loudly, accusing her of having adopted him and treating him like he was not her own child. Alarmed by the symptoms the child was displaying, the family finally sought help. Assessments revealed that Kishore did indeed have learning difficulties that were spread over the entire gamut of languages, math, and the other subjects.

In every class, we come across a handful of children who consistently perform poorly. Rather than saddle parents with complaints at every parent-teacher meeting, the teacher could advise the parents to seek help in identifying the root of the problem. A discerning teacher may look for at-risk signs and identify children whose reading and writing skills are not on par with the average child in the class. Instead of labeling such children, the teacher may ask parents to seek professional help of what might be the cause of the child’s difficulties. Learning is a complex phenomenon that depends on myriad factors. A professional assessment may help pin down areas of difficulties and possible causes.

Though identifying children at-risk for depression is not an easy task for a teacher handling a class of 40-60 students, a step in the right direction can save many young lives. Consistently poor academic performance, a sudden dip in academics or a change in behavioural patterns could be an indication of an underlying difficulty. The reasons could be many – inability to cope with the curriculum, familial pressure (academic or social), peer rejection or a traumatic incident. A sympathetic attitude on the part of the teacher would help the child. The child may then be referred to the school counsellor, a necessity for all educational institutions. In the absence of one, parents may be asked to consult a counsellor or psychiatrist. Any accommodations advised by them can be provided by the school, to the extent possible.

The family too, needs to be supportive and understanding. Parents may resist initially and may require time to accept that their child has a difficulty. They can be advised to lower their expectations to a more realistic level. They could consider changing the school to one that offers a curriculum that the child can handle. Other areas of strengths can be identified and highlighted. For example, a child may be poor in academics but may excel in sports, music, or craft. With the right kind of sensitivity and support, the child can be helped to overcome depression. The well-being of the child should be given utmost priority.

Parental counselling has also proved to be effective in alleviating depression among children. Often, the crux of the problem can be traced to heightened expectations among parents. They struggle to overcome rigid ideas and notions on how their children should perform. However, regular counselling does help them to calm down and confront their own biases. Rather than looking for shortcomings, parents are advised to focus on correcting problem behaviours using a reward system, simultaneously spending quality time with their children. Easing of stress in the parent is beneficial to both parent and child. While the former becomes more accepting, the latter is able to perform better.

Teachers can also play their part in counselling parents. While time constraints may not permit regular sessions, they can outline briefly the dos and don’ts that parents need to follow. Weekly counselling sessions can help parents change their attitude and outlook. Children too, respond positively to this transformation. Sweta was able to give up habits like nail-biting and pay greater attention to personal hygiene, besides becoming a calmer and more obedient child. Kishore’s attitude improved remarkably after his parents attended counselling for a couple of months. The realization that they were putting undue pressure helped ease the stress on the child. After changing schools, the child started performing better!

Childhood depression is combatable and even preventable with all round effort. Children who are spiraling downwards need support so that they don’t drown with the current.

The author has done her masters in Psychology and works at PRAYATNA, Chennai, as a Special Educator. She can be reached at [email protected].