The banyan tree stood strong in the middle of the jungle. Under the tree sat a deer waiting. Suddenly in distance, there was a cloud of dust. The sound of chattering filled the silent jungle. Soon the dust cleared and one could see a young, white, fluffy rabbit hopping, a group of young ants marching, an owl and some colourful birds hovering in the air, a duck waddling along with a dog that was carrying a bowl of fish on its back. One couldn’t miss the cheetah cub leading the band of animals towards the banyan tree.

No one could understand why all these animals have collected under the tree. Now the deer had some idea, so he went to ask the group of children, “What made them come so early in the morning under the tree?” The cheetah cub answered in a sweet voice, “We are the masti gang and we have come to ask a foolish person like you to be our teacher.” The deer did not know Hindi and did not understand the meaning of masti, but she thought if I ask them the meaning, they will think I am a fool and I cannot teach them.

In a gental tone, she said, “Your lessons will start from tomorow 9 am to 1 pm.” The next day the masti gang reached under the banyan tree at sharp 9 am. Standing under the tree was the deer with a blackboard and chalk. Then, she started her lesson with a lecture about addition. Only the owl was paying attention to the boring lecture the teacher was giving. 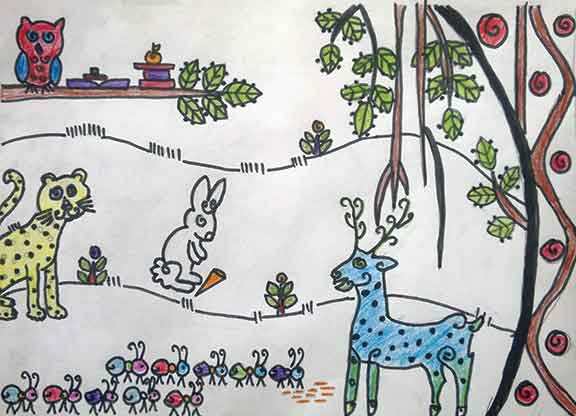 After she finished, she asked the rabbit to explain, what is addition? The rabbit answered, “If I was jumping, it would be so nice”. So the deer said “OK, all of you can do whatever you want for half an hour, then back to the tree.”

All the ants started collecting food and to do the job fast they made 5 groups. Each group got 5 rice grains. They all then started counting the total rice grains. There was a lot of noise for a minute, then they all agreed its 25 rice grain’s in total.

The rabbit saw a carrot and hence was so happy that he started jumping. He did one jump and then he did two jumps then he said, “I did 3 jumps in total.”

The owl wrote an essay based on the notes he had taken while listening to the lecture the teacher gave.

Teacher was so surprised to see this that she fainted on the spot.

What happens next is up to you.

Moral
Take rest when you give break to your students (so that you don’t faint).
Never ask a deer to be your teacher.
Owl has good listening skills.

This article is a spontaneous expression by a ten-year-old child and has not been edited in order to retain the original flavour.