I met Ravi Gulati, the founder of Manzil, at a learning conference in Delhi where he was one of the speakers. The gentleness and wisdom that shone through his words made me search him out and talk to him. This is his inspiring story! 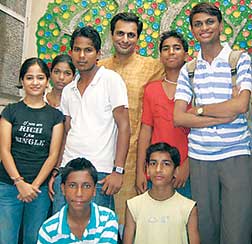 Ravi grew up in Khan Market, a posh colony of South Delhi, where some of the richest and most powerful people of Delhi stay. Like any upmarket place, Khan Market also has a few people living in big houses and many, many more, providing essential cleaning, gardening, cooking and driving services, living in small servant’s quarters and one-room tenements that are carefully hidden from the manicured views of the rich. Ravi says that he played with all the children in the neighbourhood as he was growing up but the rich kids very early got a sense of which friends could be taken home. A defining influence in Ravi’s life has been a sister with special needs. As she finished her schooling and Ravi’s mother taught in her school for 20 years, Ravi got his MBA from IIM Ahmedabad. Reluctant to plunge into the rat race that he had a golden ticket for, Ravi was trying to figure out what he wanted to do with his life when the family was sucked into a year-long battle with cancer that his father lost his life to. Ravi decided to slowly sort out all the pending duties and move to a remote village in Uttaranchal and begin organic farming.

He was relatively free and two boys, in 8th and 7th class, from the poorer side of Khan Market, came to him to learn math and he agreed to teach them. It was soon clear that although the boys were very smart, they had fundamental problems and Ravi started working with them. Soon there were 20 children of various ages and abilities coming to Ravi to learn math and this is how Manzil began its serendipitous journey into outside-school, non-formal education. Ravi’s plan to escape into the Himalayas gets renewed periodically, but Manzil, that is today more about learning and less about which side of the economic divide the student is from, has been around for 17 years and conducts classes in spoken English, math, computers, music, painting and theatre. They also have a pre-school that is open to children with developmental needs and adult education classes for their mothers. Manzil has grown organically driven by the needs of the students coming and seeking help and by students becoming teachers even as they learn something else. 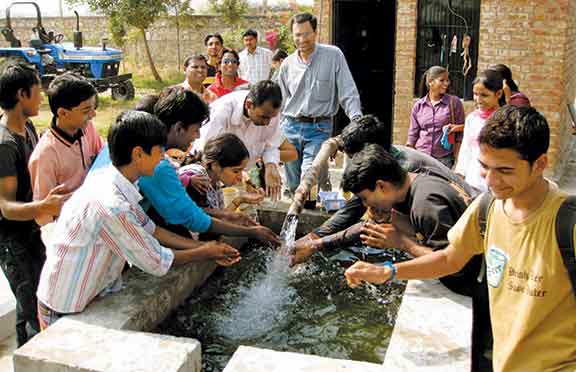 Manzil used to run from Ravi’s house but as more children enrolled, they have expanded and operate out of two small tenement houses that one of the student-turned-teacher, Anil, who has been with Manzil for over 10 years, showed me proudly around. There was a very informal atmosphere and a computer class was going on and it was difficult to tell who the facilitator was and who the students. I had asked Ravi how Manzil was funded and he gave me an answer that I will not forget in a hurry. He said that his family has passed him down two precious inheritances, one some money-in-the-bank and the other an innate miserliness that makes the money go a really long way.

Let me finish by using Ravi’s words from their website:
“…Manzil’s journey has been one of constantly discovering the deeper continuities and inter-connectedness of all life. It is this thought that infuses our work and vision, and illuminates our understanding of education and empowerment, as that which builds connections between the self and the social, the personal and the political, the intellectual and the emotional, the rational and the felt, the common and the distinctive, the ordinary and the sublime. We are all learners here. And like life itself, any Manzil is only a sojourn.”