What comes to mind when you hear the word “physics”? Some of the responses may be gravity, Newton, boring, electricity, fear, and lenses. If as a student I had been asked this question I too would have given a similar answer. However, now as an educator, if I have to respond to this question, I will say, “games, clip arts, cartoons, philosophical connections and many more.”

Physics comes alive with fun activities and games; is hilarious while learning with cartoons and cliparts, and becomes spiritual with philosophy. When it comes to Newton’s Laws of Physics, the only motto is to learn by rote all the laws correctly so that it can be stated perfectly in the assessments. With this driving force, children learn these laws correctly with examples, but they miss out on enjoying these laws in reality, which is fundamental for learning to happen. If it is dealt this way, it not only becomes interesting but also covers maximum learning domains, i.e., cognitive, visual, spiritual, and kinesthetical. It is important to bring in a bit of variety in teaching as there are different range of learners in our class and each one of them has a different way of learning.

To start with the First Law of Motion, let’s play a game 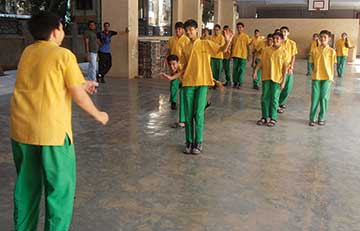 Cognitive
Discussion: Share your experience about the game. As teachers we need to probe and encourage students to think about concepts and the desired learning outcomes. Some children will definitely reflect on their motion and difficulty to stop when grandma stops.

That’s when the teacher can state/read/flash Newton’s first law of motion. “An object at rest stays at rest and an object in motion stays in motion with the same speed and in the same direction unless acted upon by an unbalanced force”. Instead of discussing different examples from the textbook directly, ask the students to give examples from their personal experience on the same.

Visual (can also be used for evaluation)
Cartoon time: Show them any road runner cartoon and ask them to spot the law in the same.
https://www.youtube.com/watch?v=8H41zbqrwVo

Spiritual
Philosophical aspect – In life there are many situations when we want to do something different or take a different stand, but the social conditions and obligations resist the change that we want to be or make. It takes courage and effort to be or bring the change.

These are the learnings of the First Law of Motion.

Now for the Second Law of Motion, let us play another game 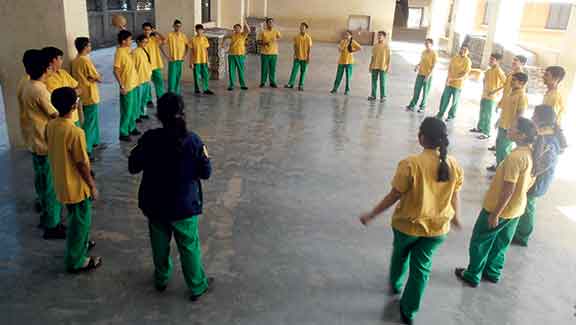 Cognitive
Discussions: Allow students to express themselves. Again ensure, as a teacher, to focus on the key idea, “momentum”. Probe them enough so that they draw conclusions about the increasing mass of the ball and speed. This will help them understand the concept of momentum. Allow them to quote some examples from their daily life and sports. After an intense discussion on the relation of mass, velocity, and force, state Newton’s Second Law of Motion, “The rate of change of momentum of body is directly proportional to the force applied on it and the change in momentum takes place in the direction in which the force is applied”.

Visual (can also be used for evaluation)
Cartoon time: Let students watch this Tom and Jerry Cartoon and spot the Second Law of Motion.
https://www.youtube.com/watch?v=j5OhSS1UjDQ

Spiritual
Philosophical aspect – In our daily life, we come across many unfavourable situations, to which we react. This reaction either in pain or in anger can have a negative impact (momentum). If we try and deal with our anger and stress differently after filtering our thoughts, it will definitely be a constructive act rather than an abrupt outburst.

Moving on to the last or the third law, let’s play a game again 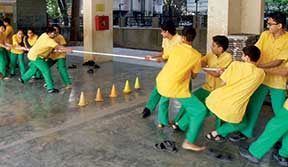 Cognitive
Discussion: Allow the students to share their experiences and speak about action and reaction. Let students discuss about different examples from their life experiences. After a deep discussion, state Newton’s Third Law of Motion, “To every action there is an equal and opposite reaction”.

Spiritual
Philosophical aspect – “As you sow, so shall you reap.” This is a clear reflection of the Third Law of Motion. In our life, all our good deeds are rewarded in some form or other and the same goes for the negative deeds. Hence it is extremely important to keep our karmic cycle with positive thoughts and energies.

After all this, it’s time for the students to check and experiment their learning. A closure activity, wherein students can make lots of toys from trash using the following website http://www.arvindguptatoys.com/newton-unplugged.php will help put their understanding into working models.

Apart from these methods, flashing cliparts, making use of mythological connections, computer games, worksheets, performing experiments in the laboratory and many more can be adopted to make any topic thought-provoking and interesting. As a teacher, I believe my students will like a topic only when I am interested in teaching that topic. Hence I make sure I bring in variety to each topic keeping in the mind the time and curriculum. With these methods I am assured that students will enjoy physics and not fear it.

The author is an enthusiastic educator and learner who believes in experiential learning. She teaches physics at Shishuvan High school. She can be reached at arunamalvi@gmail.com.