“The story of how independent India went from being a largely underdeveloped, rural land to one of the fastest growing countries in the world is a fascinating account of development. Development gave us many comforts that we often take for granted today. But it came at a price — the takeover of nature,” writes Meghaa Gupta in her new book Unearthed: An Environmental History of Independent India (2020).

It is an amazingly well-researched work of non-fiction, published by Puffin Books, and recommended for ages 10 and above. What makes it unique is the author’s ability to draw seamless connections between scientific knowledge, grassroots activism, legal reform and policymaking. She trusts the reader’s capacity to deal with complexity and engage in interdisciplinary learning.

Since the book is organized in a chronological manner, it begins with the environmental costs of the Partition in 1947. As unprecedented numbers of people from India and Pakistan crossed borders and took shelter in refugee camps, many of them fell sick due to scarcity of nutritious food and clean drinking water. With the lack of toilets, human excreta piled up, causing contamination of food and water, and subsequently diseases began to spread.

The book ends with a brief assessment of India’s National Action Plan for Climate Change, which has met with “mixed success,” and a reiteration of three major targets to be achieved by 2030. These include generating about 40 per cent of our power from non-fossil fuels, and reducing the level of emissions by 33-35 per cent of what they used to be in 2005, apart from adding sufficient forest and tree cover in order to absorb carbon emissions.

What happened between the Partition and now? Unearthed: An Environmental History of Independent India covers a lot of ground, highlighting key historical moments for a young, post-colonial India — the building of dams, setting up of research centres, testing of nuclear bombs, and passing of laws — that had a significant impact on the environment. Gupta takes a balanced approach; she invites readers to think about the pros and cons instead of being a mouthpiece of the government or a needlessly harsh critic. 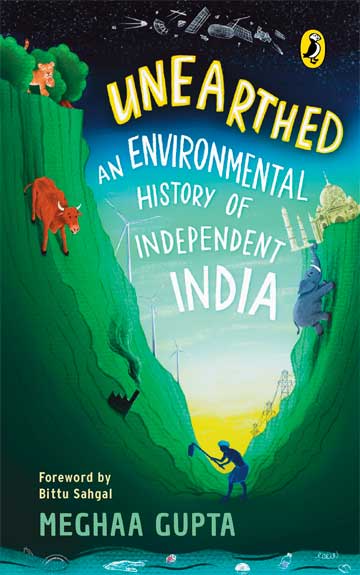 In addition to government-led initiatives such as the Green Revolution, Operation Flood, Project Tiger, Project Elephant, and Swachh Bharat Abhiyan, readers also get to learn about people’s movements such as the Silent Valley Movement, the Chipko Movement, the Narmada Bachao Andolan, and the Kudankulam agitation. This distinction is important to make because people’s movements have usually arisen in reaction to politically motivated actions that harm local communities.

The author introduces readers to numerous individuals who have contributed to India’s environmental history – Saalumarada Thimmakka, “who is more than 100 years old, and has been planting trees since 1948,” Rajagopalan Vasudevan, “a chemistry professor who came up with the idea of using plastic waste in building roads,” and Darryl D’Monte “who created a forum for environmental journalists to inspire greater reporting on the subject,” among others.

A notable aspect of this book is the style of writing. Gupta has a lot of information to convey but she knows that the reader can take in only a certain amount at a time. Facts and statistics are interspersed with anecdotes, trivia, and reflection prompts. She retains a touch of lightness in her narration even while addressing issues that are serious in nature. Here is an example that is guaranteed to make an entire class chortle with laughter:

Gupta writes, “After eating and drinking, cows, just like humans, also belch and fart. These belches and farts release methane, a type of greenhouse gas, into the air. In fact, one dairy cow can emit about 100-150 kilograms of methane every year! Like carbon dioxide, methane also traps heat and contributes to global warming.”

Unearthed: An Environmental History of Independent India does an excellent job of showing how technology can be used to bolster conservation efforts. Did you know that hundreds of elephants in India have died in train accidents? Gupta writes about “sensors mounted on poles” along railway tracks to monitor their movements. “If an elephant sets off a sensor, a text message is sent to the railway staff and the animals are chased away.” Devices that produce the buzzing sound of honeybees are also used to keep elephants away from railway tracks.

Aditi Shastry’s comics and illustrations complement Gupta’s writing, and provide visual relief for readers who might get overwhelmed with text. The book’s appeal lies in the fact that it comes across as a fun book. While Gupta does talk about horrific events such as the Bhopal Gas Tragedy, and uranium poisoning in Punjab, she does not torment readers with dystopian imagery or tell them how to lead their lives. This book does not take readers on a guilt trip. It provides information, sparks curiosity, and leaves them alone.